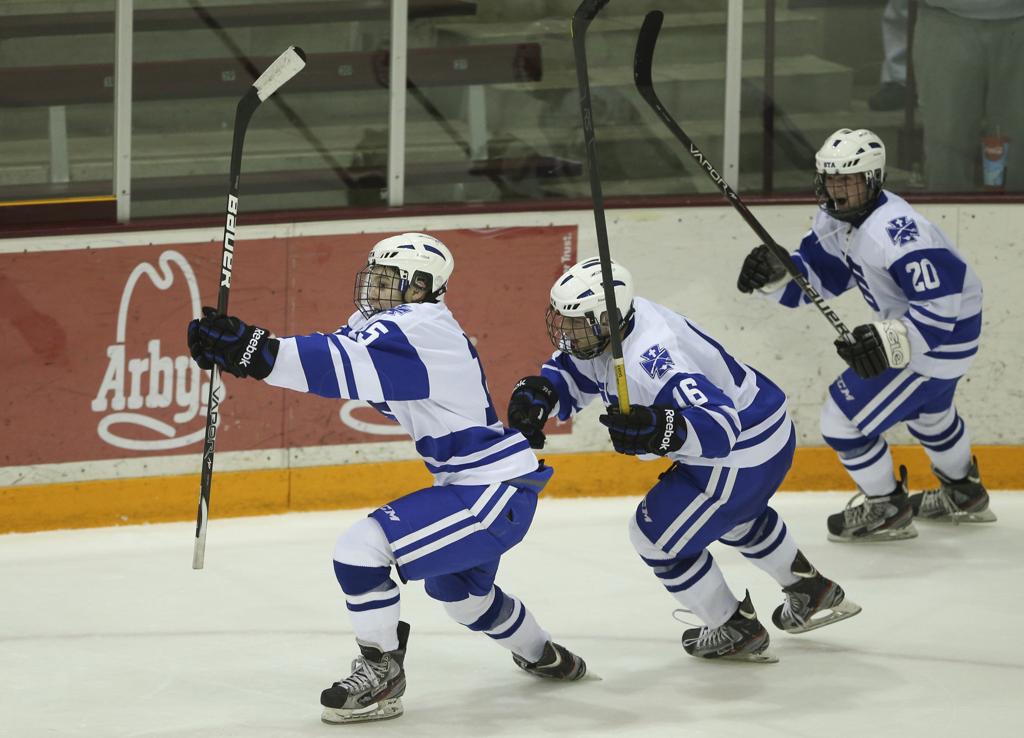 After three consecutive Class 1A state titles and five in the last eight years, the Cadets have moved to Class 2A this season.

The move came after plenty of criticism in prep circles over the private school’s stature and dominance in the smaller-school class of the Minnesota high school hockey world.

Coach Greg Vannelli is just glad to be done with it and start playing hockey.

“You do get tired of the general public’s opinion all the time, and even some coaches, I guess,” Vannelli said. “So that’s all put to rest. Now we just have to move forward.”

The Cadets have been playing a Class 2A-caliber regular-season schedule for several years now. So the most significant effect of their new classification won’t be felt until sections.

“You’re obviously focusing on a lot of other things besides that,” Vannelli said. “It’s really not the biggest thing – but at some point in the season it becomes a big thing, especially toward the end. But now it’s all about getting the right guys on the ice.”

That’s the task at hand as St. Thomas Academy hit the ice for their first official team practice on Monday. The Cadets lost 13 players from last year’s state championship team, but they do return their top two scorers.

Tom Novak scored 28 goals while adding 29 assists for 57 points in 31 games last season. The junior and Gophers recruit also ranked second in the Elite League in scoring this fall with 35 points in 22 games.

Along with Christiano Versich, who notched 38 points in 30 games last winter., the two ultra-skilled forwards will be called upon more heavily this season. After impressive years from an offensive production standpoint, both leading scorers can take another step this winter, Vannelli believes.

With a younger, less-physical team than last year’s state championship squad, Novak and Versich will have to play in the tougher areas — the corners, walls and crease area — more often. They each gained about 10 pounds since claiming the title last March.

“We had such a physical team last year that they didn’t have to get into that part of the game as much,” Vannelli said. “This year, they’re going to have to play both ends of the rink at a high level – and I think they’re ready for that.”

Vannelli is not as concerned about scoring as he is team defense this season. There are just four seniors on the roster, which means physical maturity may play a factor. Juniors and sophomores will have to handle a lot of responsibility.

“The physical component is not the easiest for younger kids at this level,” Vannelli said.

An unexpected loss for the Cadets was the early departure of stalwart defenseman Jack Dougherty, who accepted a spot with USA Hockey’s National Team Development Program in Ann Arbor, Mich. Dougherty’s stock rose dramatically in the past year or so with strong appearances in national and internationally competitions.

But others are showing promise. Defensemen Seamus Donohue, Zach Weier and Jim Dolan have all received rave reviews for their progress this offseason.

It will be a true tryout situation in net for the Cadets after losing David Zevnik, who claimed the Frank Brimsek Award as the state's top senior goaltender last year. Three goaltenders vying for the starting position this year each played junior varsity last season.

For the playoffs, the Cadets will be in Section 3, which includes Eagan, Cretin-Derham Hall, Rosemount, Apple Valley, East Ridge and others.

Will they be able to make it to Xcel Energy Center in March during their first season with the big schools?