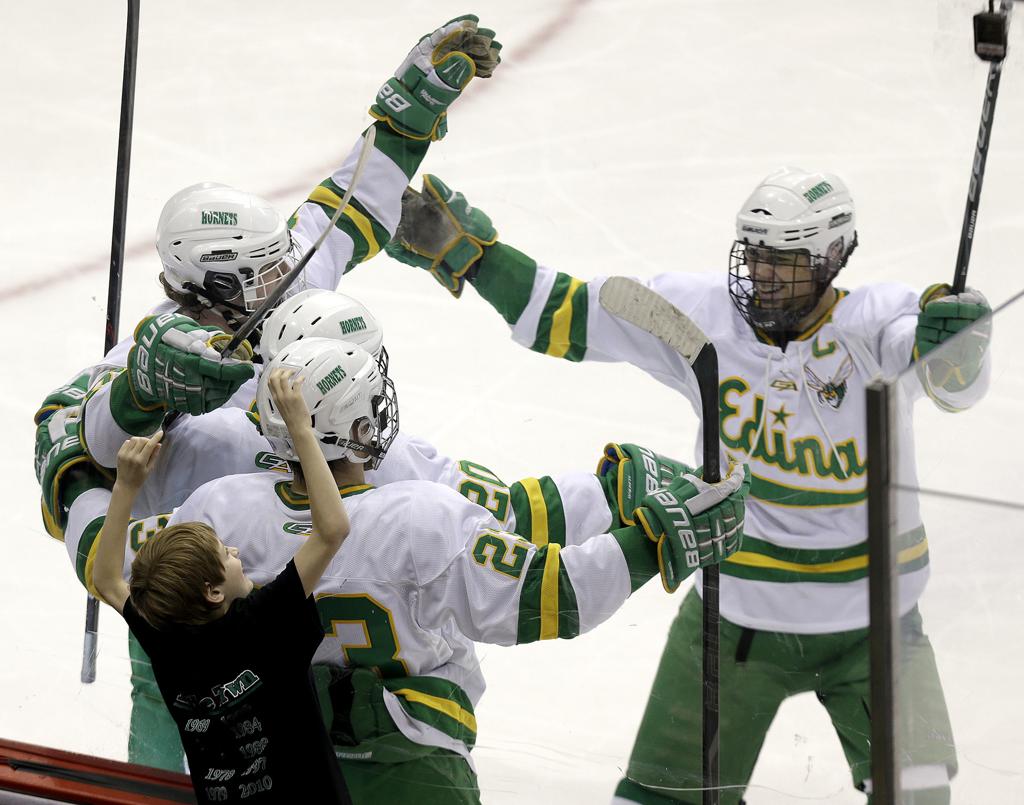 Celebrating an Edina goal by Dylan Malmquist during the Class 2A boys' hockey tournament quarterfinals last March. Players will be encouraged to 'find a teammate' this season. (Elizabeth Flores, Star Tribune photo)

A resounding “Finally!” echoed through hockey rinks statewide last spring as five-time small-school champion St. Thomas Academy opted up to Class 2A. The all-boys private school located in Mendota Heights won the past three Class 1A titles and became one of the state’s top programs regardless of class. But the Cadets drew the ire of hockey observers, and even coaches, for staying among smaller outstate programs lacking the ability to attract players from a large population. This season the Cadets were placed in Section 3 with teams such as Eagan and Eastview.

Tired of players cleaning the ice, doing “fly-bys” or Tebowing, coaches are informally enforcing the “find a teammate” rule for goal celebrations. Taking control of sportsmanship was a point of emphasis at coaches advisory meetings this offseason. No official penalty will be called for violators, but coaches want goal scorers to share the spotlight.

3 OUTDOOR GAMES are in the works

Five high school hockey games likely will be played outdoors on Jan. 11 at TCF Bank Stadium as part of the Hockey City Classic. Drew Russell with Chicago-based Intersport promotional group said he is working with the Minnesota State High School League (MSHSL) and Minnesota Hockey Coaches Association to schedule teams and expects to finalize matchups, including a girls’ game, in early December.

St. Paul Johnson’s program turns 100 this winter. Winners of state championships in 1947, 1953, 1955 and 1963, the Governors count Herb Brooks, Wendell Anderson and Les Auge among notable past players. Celebration day is Dec. 21. The alumni game will take place at Gustafson-Phalen Arena, followed by the 3 p.m. varsity game against South St. Paul at Aldrich Arena and an alumni dinner.

The MSHSL took unprecedented steps midway through the 2011-12 season, leveling stiffer penalties and zero tolerance for three dangerous hits: checking from behind, boarding and contact to the head. Referees once again have discretion in contact-to-the-head situations. Direct contact will result in a five-minute major penalty. If referees believe the contact is indirect, they can call a minor penalty. The rule change also applies to girls’ hockey.