Undeterred by the loss of marquee players, west metro boys’ hockey teams have reloaded with talent. 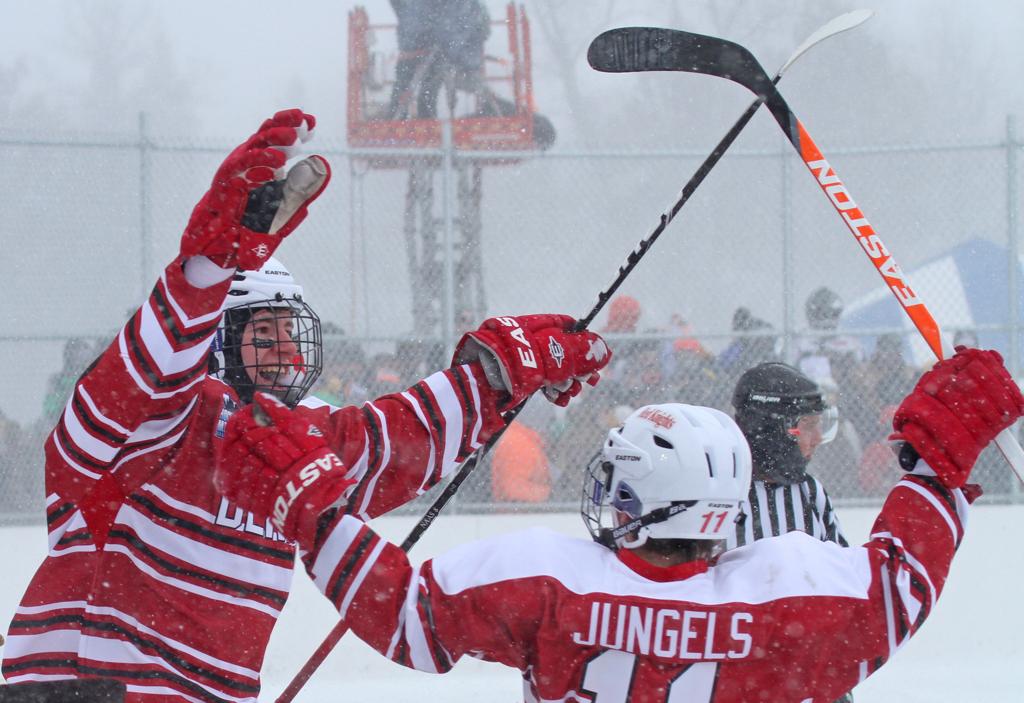 (left to right) Benilde-St. Margaret's Spencer Naas celebrated his goal against Grand Rapids, with Chase Jungels during the second game of Hockey Day Minnesota on the shores of Lake Pokegama in Grand Rapids on 1/19/13. At this point in the day the weath

Graduation and junior hockey defections have made the west metro boys’ hockey scene almost as notable for who’s not playing as who is. High-profile players such as Shane Gersich of Holy Family, Connor Hurley of Edina and Jack Ramsey of Minnetonka are among the players who have decided to further their hockey careers away from the spotlight of Minnesota high school hockey.

But looking ahead to the 2013-14 season isn’t about who is gone. When one player leaves, an opportunity opens for another.

Here’s a look at what Minneapolis and its western suburbs have to offer in boys’ hockey this winter.

Wayzata: Coach Pat O’Leary has four of his top five scorers back from the Trojans’ 2013 state tournament qualifiers. Junior Matthew Freytag and sophomore Maxwell Zimmer are the scoring whizzes and have plenty of senior leadership to depend upon.

Eden Prairie: The Eagles’ strength is their experience and their blue-liners, led by senior Luc Snuggerud, who is equally adept at offense and defense, and scoring leader Steve Spinner. Both are Mr. Hockey candidates.

Benilde-St. Margaret’s: Senior forward Spencer Naas has scored 77 goals in the past two years but was often outshone by the now-graduated Grant Besse. This season with Naas, defenseman Johnny Austin and transfer Carter Roo, the Red Knights have plenty of offensive firepower.

Minnetonka: The Skippers are young, having lost nearly all of their scoring punch from last year. They welcome Gavin Payne, a high-scoring transfer from Orono, and a host of talented underclassmen ready to impress. Tonka won’t fall far.

Breck: The majority of the Mustangs’ 2013 Class 1A third-place winners is back, led by rock-solid seniors in goalie Henry Johnson and defenseman Derek Wiitala. Scoring won’t be a concern; Michael Orke, Mark Sharp, Chase Ellingson and Lucas McCormick had a combined 57 goals and 110 points last year.

Delano/Rockford: The Tigers started the season with two shutout victories, showing a better-than-expected defense and surprisingly strong goaltending. If the offense lives up to expectations, the first state tournament berth in team history is a real possibility.

Blake: The Bears are plenty talented but young. Most of those players gained experience, and took a few lumps, in a 10-18 season last year. Improvement is certain with talented underclassmen Cade Gleeckel, Mark Lyman, Edmund Chute and Johnny Ferguson.

Bloomington Kennedy: Could this be the year Kennedy makes a move? Getting senior forward Hank Roers, who missed most of 2012-13 because of a broken collarbone, for an entire season is crucial. Much rides on the play of senior goalie David Johnson, a workhorse who logs heavy minutes.

Mound-Westonka: Heavy losses to graduation will hinder the White Hawks early as coach Doug Runke tinkers with combinations. Senior forwards Hunter Smith, Tommy Ewing and Jack Sterne are a nice trio upon which to build.

While some top games already have been played — Edina’s recent 3-1 victory over Wayzata, for instance), there is much for a hockey wonk to look forward to.