Eight players from Minnesota made it, among them the Wild’s Zach Parise, joined by an NHL teammate, Ryan Suter. 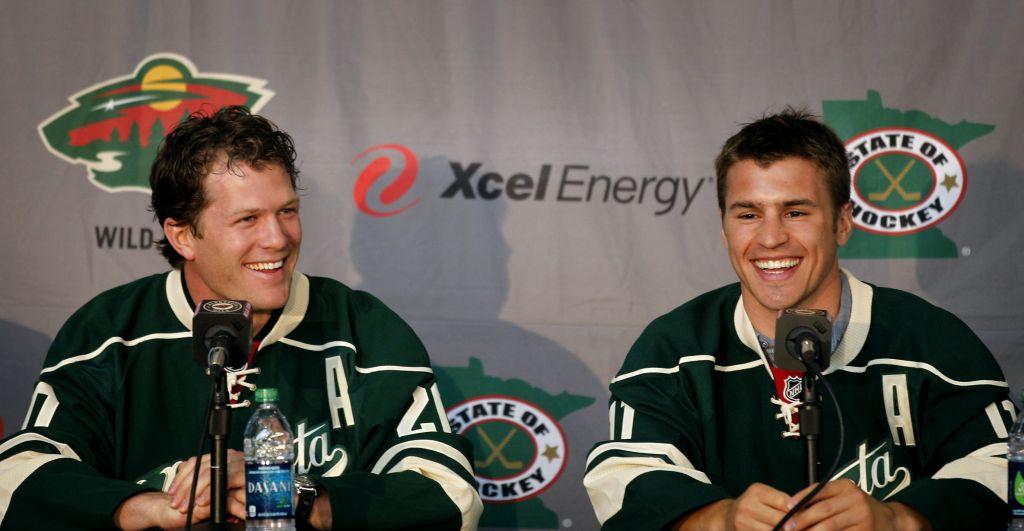 The Minnesota Wild introduced Ryan Suter, left, and Zach Parise to the media at a press conference Monday July 9, 2012 in St. Paul, MN. Both were named to the U.S. Olympic team on Wednesday, Jan. 1, 2014.

There will be a distinct Minnesota flavor when the U.S. men’s hockey team takes the ice in Sochi, Russia, for the Winter Olympics next month.

Of the 25 players who made the U.S. roster Wednesday, eight hail from Minnesota — the Wild’s Zach Parise, St. Louis Blues captain David Backes, the Rangers’ Ryan McDonagh and Derek Stepan, Pittsburgh’s Paul Martin, Carolina’s Justin Faulk, Winnipeg’s Blake Wheeler and St. Louis’ T.J. Oshie, who was born in Washington but has his hometown listed as Warroad by USA Hockey.

Some notable snubs include the Wild’s Jason Pominville, the Islanders’ Kyle Okposo, Colorado’s Erik Johnson, Ottawa’s Bobby Ryan and Winnipeg’s Dustin Byfuglien. According to a piece by ESPN.com’s Scott Burnside, who was embedded with Team USA during the selection process, the hierarchy didn’t believe Pominville and Okposo, despite strong NHL seasons, are built for the international ice sheet. Ryan, a sniper who took part in the 2010 Olympics in Vancouver, lacks intensity and speed, according to the article.

“It’s exciting to finally know the 25 guys that are going to make up Team USA, but you have to feel bad for our friends and teammates that won’t be there,” Backes said.

All rosters will be announced by Tuesday. The Wild could have four other players heading to Sochi: Finland’s Mikko Koivu and Mikael Granlund, Sweden’s Jonas Brodin and Switzerland’s Nino Niederreiter.

Parise is expected to be the Americans’ top-line left wing, while Suter should be a top-pair defenseman with Faulk, St. Louis’ Kevin Shattenkirk or Martin. Suter has the most international experience of anyone on the roster, with 64 games wearing the red, white and blue jersey. Faulk, a South St. Paul native, is the youngest player on the roster at 21.

“I like our team,” said Parise, currently sidelined from the Wild with a broken foot. “I think we’ll be a tough team to play against. We’re going to Sochi to win gold.”

It took Parise a long time to get over losing the gold-medal game to Canada in 2010. Parise scored the tying goal with 24 seconds left before Sidney Crosby won it in overtime.

“But you realize after awhile how much we accomplished winning silver,” Parise said. “We have as good a chance as anybody else [next month]. In a tournament, you get a hot goalie or someone gets hot, you never know. Miller was unbelievable for us last time and carried us all the way to the gold-medal game.”

In building the team, the U.S. selection committee, which included GM David Poile, coach Dan Bylsma and 2010 GM Brian Burke, made clear they weren’t picking an all-star team. The Americans have won medals with NHLers in 2002 in Salt Lake City and 2010 in Vancouver but failed to do so in 1998 in Nagano, Japan, and 2006 in Turin, Italy.

The international ice sheet is 15 feet wider than an NHL rink, so there was a premium on skating in the selection process, especially from the back end. That’s a big reason defensemen like Anaheim’s Cam Fowler and Washington’s John Carlson made the roster.

“It’s analogous with Canada, too,” Backes said. “North American players tend to struggle on the big ice. It’s a combination of being a little uneasy being in a different culture, a different time zone, that sort of thing, and then you throw in the ice. The ice surface does sway the level.

“We’re going to have to adjust and make sure we don’t try to take our North American game and force it on that big ice. That’s been tried and failed many times. We have to adapt to a more puck-possession type of game.”

Shattenkirk was ecstatic to make the team with St. Louis teammates Backes and Oshie.

“To share it with buddies you spent time with every day is really special,” he said. “It’ll be a bond we’ll share for the rest of our lives.”

The U.S. opens the tournament against Slovakia on Feb. 13.

“A lot of us have done it before at the world championships and world juniors, but the Olympics are a whole new level,” he said. “It’s so hard to describe just the pride that you have knowing that your whole country is watching and supporting you. There’s nothing like it.”