Altmann brothers, Nick and Ash, combine on winning goal in triumph over Eagles 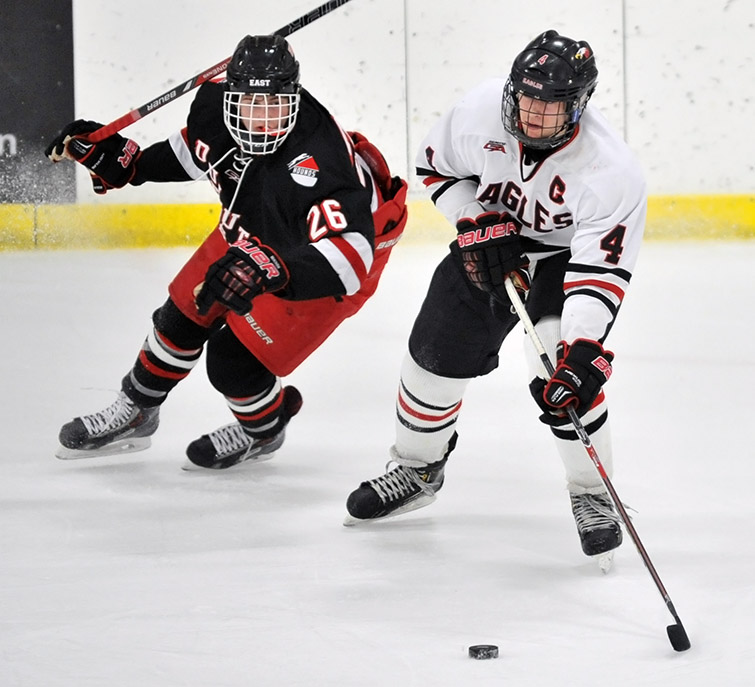 Ash and Nick Altmann play a lot of outdoor hockey together, creating a bond that translates to the indoor rink.

“It’s really cool playing with my brother, playing side to side with him,” Nick said. “We’ve been playing together for a while, so I kind of know where he is on the ice.”

Ash was quick to compliment his older brother, “He’s got more talent than me, and he helps me get better.”

Nick, a junior, played on the varsity team last year, while Ash, a sophomore, played on Duluth East’s Bantam AA team that finished second in state. “I played last year a lot, so it’s been nice to get in the swing of things and start to try to be a leader,” Nick said. “Now that he (Ash) is starting to get in the swing of things and starting to try to get games under his belt, he’s probably going to do the same thing next year and help carry the team.”

When asked about the Altmanns, Duluth East coach Mike Randolph said, “They are two very key players for our team.”

Nick, the team’s leading scorer, assisted on his brother’s goal late in the first period. The goal, Ash’s fifth of the year, would prove to be the game-winner for Duluth East, with the ninth-ranked Greyhounds defeating seventh-ranked Eden Prairie 3-1 on Saturday afternoon at the Eden Prairie Community Center.

Said Eden Prairie coach Lee Smith of Altmann’s goal, the result of a sprint down the ice and drive straight through and Eagles defenseman to the net, “It was a great play by (Altmann), and I think it put our guys on their heels coming into the locker room.”

After combining for three goals in the first period, neither team scored until a Duluth East empty net goal with 7 seconds left in the game. Penalties were scarce as well, with the game’s only call coming on a trip against Duluth East. This presented an excellent opportunity for Eden Prairie to tie the score late in the third period, however it could not capitalize. “They did a good job of not letting us even get it (the power play) set up,” Smith said.

Randolph said of his team’s penalty kill, “Our guys did a heck of a job killing a very good power play, and that was huge, especially in a one-goal game.”

With the win, Duluth East moves to 9-3-0 on the season and stretches its winning streak to four games. Eden Prairie falls to 8-4-1 and has lost four of its last six.

Duluth East goaltender Gunnar Howg dives to knock the puck out of the crease area in Saturday's 3-1 victory over Eden Prairie. Photo by Loren Nelson