Benik down but not out

Joey Benik saw the collision and went airborne in an attempt to avoid it. Instead, he became an unwilling participant in the practice pileup.

He did not skate away unscathed. Benik suffered a right leg injury that not only halted his fall Minnesota Junior Hockey League season with the Minnesota Owls but, for a few chilling moments, put the St. Francis’ senior’s high school season in doubt.

“It wasn’t good,” Benik, the state’s second-leading scorer last season after racking up 101 points for the Saints, said about the immediate aftermath of the collision that left him with a deep knee bruise and pulled calf muscle.

Benik had skated in just two games for the Owls, a Tier III Junior A team that plays its home games in Isanti, before suffering the injury. Benik said his doctor told him to stay off the bruised knee for the first two days after injuring it. After that, the pulled muscle became the big concern.

“My calf was hurting a lot,” he said. “I was pretty scared.”

Then, almost as quickly as Benik suffered the injury, it started to heal. Benik, a 5-foot-9, 170-pound center who has verbally committed to St. Cloud State, said he expects to be on the on ice with his St. Francis teammates when high school practices officially start in mid-November.

“I think we are going to have a really good year,” said Benik, who passed on opportunities to play high-level junior hockey in favor of spending a final season with his childhood buddies and twin brother, Andy, the Saints’ goaltender. “Whatever I ended up doing, I knew it was going to be a tough decision. After I thought about it for a while, I decided the best thing for me would be playing high school for another year.”

For months, St. Francis coach Tony Hoops had heard whispers about Benik’s possible departure. Now, with the return of one of the state’s most gifted scorers, Hoops returns most of his lineup from last year’s team that posted a 19-6-1 regular season record.

“I knew he was pretty much coming back,” Hoops said. “But there are constantly rumors that swirl. It’s good news for the players and the community. This is one of the best groups to ever go through the St. Francis hockey program, and Joey obviously has been a huge part of that.”

Benik’s mother, Vickie, said the family allowed Joey to make the decision to stay at home or leave for a season with what most likely would have been the USHL’s Fargo Force.

“I think there are a lot of options for kids out there,” Vickie said. “But it’s hard to leave everything you’ve known.”

For Vickie, it would have been bordering on unbearable to watch her son leave town to live with a host family.

Motivating Benik to stay, in part, was last year’s heartbreaking ending to what otherwise was a storybook season. The Saints were stunned by Princeton 9-3 in a sectional play-in game.

“There’s been a lot of talk about the schedule we play and how it isn’t very good," Benik said. "A lot of the guys have been hanging out and working out together all summer. The goal for all of us is to kind of put St. Francis hockey on the map.”

Right now, though, a more pressing concern for Benik is that leg injury. After scoring a state-best 63 goals in the regular season a year ago, he will, in effect, be wearing a blaze orange jersey all season as opposing defenses target him. He’ll need both legs to be in full working order to not only match last seasons’ mind-blowing scoring totals but avoid any other unwanted collisions.

“He’s a sharpshooter, he’s a sniper ---- any kind of those words that you can use about a guy who puts the puck in the net,” Hoops said. “You know ‘Slippery When Wet,’ the signs? He can go from the corner to the net so quickly, even if he has to slither through a crowd.” 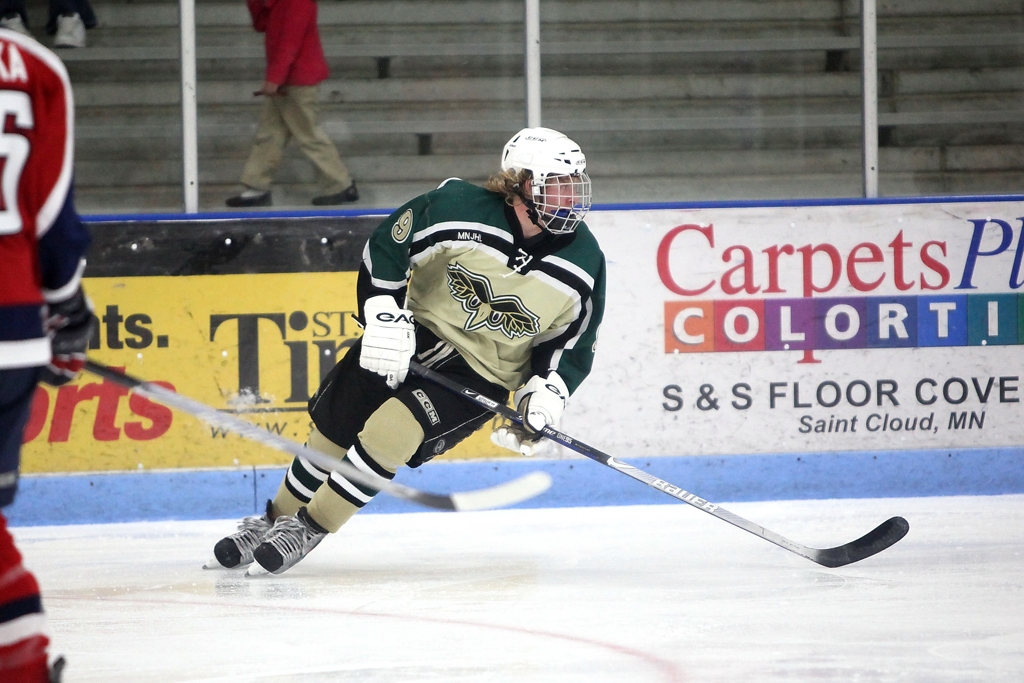