Forty-one high school players — many of them budding stars or members of the state’s most prominent hockey families — chose to leave their teams before this season for “better” leagues. That’s a record number. 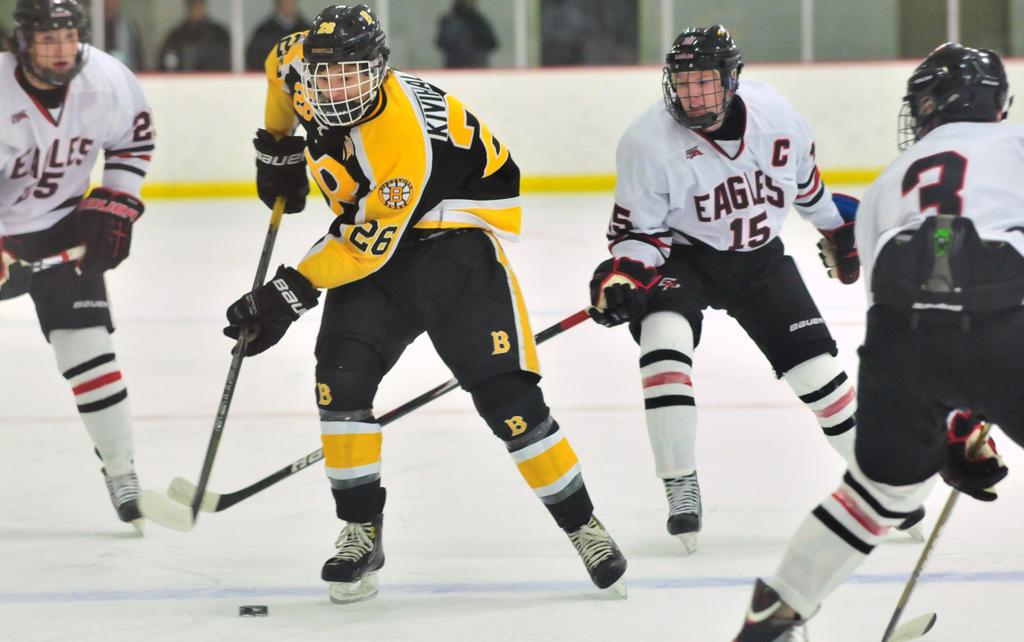 Former Burnsville defenseman Teemu Kivihalme (26) opted for more seasoning in the United States Hockey League before he moves on to Colorado College.

The first one to leave was the oldest son of Gophers hockey coach Don Lucia. Then one of hockey icon Lou Nanne’s grandsons left the country.

Before this season, when a record 41 high school players quit before the season to advance their careers elsewhere, the hockey pedigree included Mike Ramsey’s kid. The son of the Burnsville coach. The son of a top high school official overseeing the prized state hockey tournament.

The exodus, now more than two decades in the making, has some observers downgrading the prestige of the high school league’s most popular state tournament, set for its 70th run in just four weeks.

It’s reached a point where advocates for high school hockey are ramping up efforts to fight back with marketing and player research. Meanwhile, coaches of some kids who left don’t see a problem.

To bolster high school hockey, the Minnesota State High School League added a second class in 1993-94, doubling the number of state tournament entrants. The regular-season schedule expanded from 22 to 25 games in 2000-01. And periods were lengthened from 15 to 17 minutes in 2003-04.

“We haven’t defined the problem,” said Skip Peltier, former associate director in charge of the state hockey tournament. He cited a need for “synergy’’ among high school coaches, Minnesota’s five Division I college coaches and the high school league.

“We’ve all fallen short,” he said.

Members of the Minnesota Hockey Coaches Association, the state’s leading advocates for keeping seniors on their high school teams, said the actions of hockey’s best-known families in seeing their sons leave have hurt the cause.

“It stung a little bit,” said Mike MacMillan, the association’s executive director. “We didn’t feel there was a need for them to leave early. It’s been difficult to look at those situations and not question a little bit their belief in high school hockey.”

MacMillan said his organization is building a database of players who left early the past five years to track their post-high school experiences. In addition, a survey is being created for those players to understand the motives for leaving.

In 2008 the MHCA launched its “Nothing Compares” campaign, featuring testimonials of 21 Minnesotans who played their entire high school careers and later reached the NHL.

But the battle to keep players in Minnesota high schools is “beyond us just sloganeering,” said Ken Pauly, Benilde-St. Margaret’s coach and association president. “Do we have the programs to offer these kids? I believe we do. It’s sad when people who call themselves leaders in the state don’t buy into that.”

After two top Minnetonka players — Vinni Lettieri and Jack Ramsey — left the school’s program to play elsewhere for their senior season, coach Brian Urick delivered a message to his freshmen playing varsity this winter: Stick together, stick around and make your run as seniors.

It’s a plea that is taking on added urgency throughout the nation’s most fertile hockey state.

Some of it is from scouts and family advisers who suggest players accelerate their development. Meanwhile, the average age of a freshman college hockey player is 20, said Joe Bertagna, executive director of the American Hockey Coaches Association since 1991. Players who come in as 18-year-olds often do so after a year of higher-level hockey.

Gophers coach Don Lucia has urged players to spend a year in the United States Hockey League (USHL) to further their development. But never, he said, at the expense of their high school career.

“We’ve been supportive of kids staying,” said Lucia, though both of his sons, Tony and Mario, skipped their senior seasons at Wayzata. Tony played in the United States Hockey League while Mario headed to play in a similar Canadian league in Penticton, British Columbia. Each league offered longer seasons and higher levels of competition.

Lettieri, a Gophers freshman, “knew he had to play a year of juniors and he didn’t want to wait an extra year,” said Lou Nanne, Lettieri's grandfather.

Another of Nanne’s grandsons, Louie, left Edina for Penticton. A third, Tyler, stayed to lead the Hornets as a senior this winter. Both have committed to college hockey programs.

Jack Ramsey, who committed to the Gophers, left Minnetonka early to play for Penticton. His father, Mike, who played for the Gophers and served as a Minnesota Wild assistant coach, acknowledged that for many seniors, “their only chance to play college hockey as a true freshman is to move on and play juniors somewhere.”

‘You don’t need to leave’

MacMillan and Pauly believe a Minnesota high school hockey player does not need to leave his school to enhance his development. But getting their message heard over the growing din of competing voices has proved challenging.

MacMillan maintains there is plenty to keep players home and still “elevate their draft stock and be successful college players.” He points to the Upper Midwest Elite League, offering about 20 games in the fall against top competition that attracts college coaches and scouts, 25 regular-season games plus playoffs and spring and summer hockey programs.

Recent efforts by coaches to add a week to the season or increase the amount of scrimmages failed to gain traction. Dave Stead, high school league executive director, said not all schools throughout the state can afford expansion.

Ultimately, Stead said, players who decide they must leave early create participation opportunities for others.

Burnsville coach Janne Kivihalme sees high school hockey as an “excellent steppingstone for players good enough to go to the next level.” His son Teemu, a defenseman committed to Colorado College, is playing in the USHL this season.

Said Lucia, “We should embrace the ones who are ready to leave. At that point we’ve done our job.”

Tom Chorske won the state’s inaugural Mr. Hockey award as a senior at Minneapolis Southwest in 1985. He then played for the Gophers and later turned pro and won a Stanley Cup and doesn’t think it’s “usually necessary” for elite players to leave early.

The growing number of players who do, he said, has “scouts and recruiters getting to the point where they are rolling their eyes” at the hallowed state tournament.

“They feel like they have to come and see it but it’s not what it used to be,” Chorske said.

Pat Westrum, Midwest amateur regional scout for Phoenix and Montreal the past 10 years, laments what he calls a “watered-down” state tournament that has “lost glamour as far as seeing top high school players’’ because many leave early.

The tournament attracts more than 100,000 fans annually and produces more than $1 million in revenue, almost double the amount of money football generates and three times more than boys’ basketball. The tournament’s director is Craig Perry, whose son, Chase, left Andover after his junior season to play goaltender in the North American Hockey League.

“When you’re sold out, like we are for the Class 2A, you can’t get any better than that,” Perry said.

MacMillan sees the hugely popular hockey fixture as an opportunity to ramp up his group’s “Nothing Compares” campaign through digital mediums.

In delivering his message about the value of sticking around, Minnetonka’s Urick points to alumni such as NHL defenseman Jake Gardiner as proof that players can reach higher levels after fulfilling their high school careers.

“You plant the seed early about all the work these guys have put in together as a team,” Urick said. “They have to decide for themselves, ‘I can’t let my buddies down.’ That’s one thing that might keep kids home.”

“I’d rather be an alarmist than complacent,” Pauly said. “I believe there are some things worth preserving. Across the country people look at Minnesota hockey and say they wish they had what we have.”

Massachusetts is a cautionary tale, said Bertagna, who played high school hockey there in the late 1960s. Players flock to Midget AAA and prep school teams but fewer college players are being produced.

In 2002, Massachusetts counted 200 Division I hockey players. By 2012, the number dropped to 102. During the same span, Minnesota dropped from 211 to 182 Division I players, still the most in the country.

Perry said college scholarships “can’t be the focus of a high school program. It has to be overall preparation and development.”

As a result, more local puck chasers with big dreams are questioning high school’s place on their journey.

“I don’t think we’re ever just going to be able to stand up as a body and say, ‘Listen, let’s stop this,’ ” said Guentzel, who had two sons, Gabe and Ryan, play their senior seasons of high school hockey and one, Jake, who left early. “Can we slow it down a little bit? Maybe.”