Walk the streets of cozy Roseau (population 2,700), and there’s a better than fair chance you’ll bump into a bonafide Minnesota hockey legend at the corner store, movie theater or coffee shop.

Matter of fact, if you’re looking to buy a used car, former high school sensation and NHL player Bryan “Butsy” Erickson would be more than happy to offer his assistance in the heart of downtown at Bryan Erickson Auto Sales.

In need of financial advice? No problem. Former NHLer and U.S. Hockey Hall of Fame inductee Aaron Broten is available about a mile or so to the west on Highway 11 as a broker at Investment Centers of America.

Best of all, if you are a first-year head coach hoping to assemble a staff of overqualified assistant coaches, it seems all you have to do is ask.

“We are actually on the same golf team,” Andy Lundbohm, the Rams’ first-year coach in question, said about how he approached Broten with his offer. “I showed up at the course one day, and I told him I got hired for the job. I said, ‘I’d like you to work with me.’ He said, ‘Let me give it some thought.’ ”

Erickson was working on his cabin in the Northwest Angle when second-cousin Lundbohm popped the question.

“I thought he still had in interest in coaching, and I thought, ‘Why not ask him?' ” Lundbohm said.

Of course, both Broten and Erickson, who spent a combined 22 years in the NHL, said yes. And with Scott Oliver, who merely has coached two national championship college hockey teams at UM-Crookston as well as guiding high school championship squads in boys hockey (Roseau, 2007) and football (Glyndon-Felton, 1985), on board as the Rams’ junior varsity coach, Lundbohm’s dream coaching team is complete.

“Like anyone, you need people you are going to trust and get sound advice from,” Lundbohm said. “I figured I can ask them, and the worst they can say is no. I’m not out anything.”

A Roseau varsity assistant for the past five seasons, the 32-year-old Lundbohm’s only other coaching experience came during a stint in Bagley. He now finds himself in the crucible that is coaching the seven-time state champion Rams.

“Oh, goodness yes, there’s pressure,” said Erickson, who agreed to coach the Rams during the 2002-03 season as a stopgap measure after the departure of head coach Bruce Olson. “We’re about winning championships, that’s the goal of our program going into every season.”

Although Roseau had what was a down year by its standards during Erickson’s lone season as head coach, he said he enjoyed the experience so much he would have thrown his name into the pool of head coaching applicants if Lundbohm hadn’t expressed interest in the job.

“Andy was the right guy,” Erickson said. “He had paid his dues.”

Erickson and Broten grew up one house apart in Roseau and teamed with the legendary Neal Broten, Aaron’s older brother, to form one of the greatest lines in Minnesota high school hockey history. Erickson and Aaron Broten have remained close friends over the years, and most recently have partnered to coach Roseau’s Bantam A teams.

“Oh, I was very exited to have them as coaches again,” said Roseau senior forward Adam Knochenmus, who had Broten and Erickson as his Bantam coaches. “They are pretty much legends here in Roseau. If they tell you something, you listen.”

All those years playing at the highest of levels can only add to Broten and Erickson’s coaching repertoire, said International Falls coach John Prettyman.

“Along the way, you also have played for many other coaches and played in many other systems,” said Prettyman, whose Broncos also have won seven state titles and play Roseau every year in a late-season non-conference matchup. “Every little thing you know about hockey, you can incorporate.

“It also brings credibility as coaches.”

By assembling his all-star staff, Lundbohm also has earned some instant credibility. But in Roseau, everyone knows that winning is the currency that matters.

"Obviously, there is a little bit of pressure," Broten said. "I don’t feel like the pressure is a factor, myself. (Coaching in Roseau) is a lot of fun, and it’s a lot of work. Most things that are fun are a lot of work."

Lundbohm, too, seems unphased by expectations that, year after year, are in the stratosphere.

“What I like about this community is there is so much passion for hockey,” Lundbohm said. “The bar is set high. I like that.

“You get the kids who come into the program, they have seen that a kid from this town has been able to do it before, so they say, ‘Why can’t I?’ In other towns I can only assume coaches have to sell their kids on what they are capable of.”

In other towns, you typically don’t bump elbows with hockey legends in the produce aisle.

“It seems like they have quite a legacy of people returning and giving back to their program,” Prettyman said. 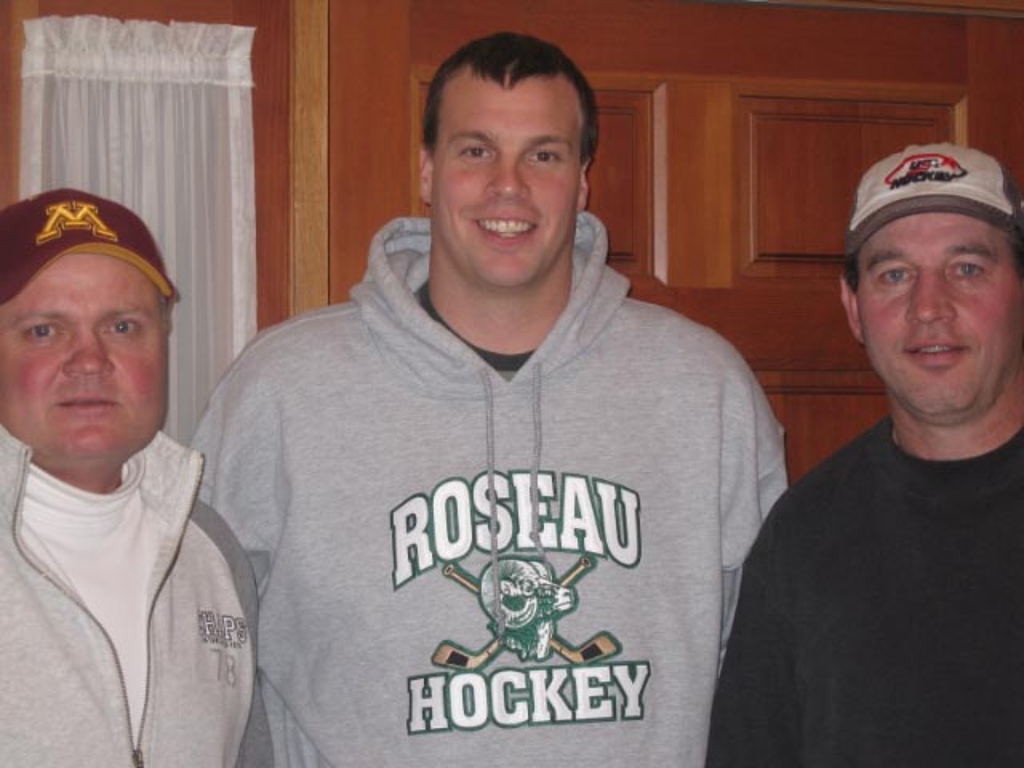