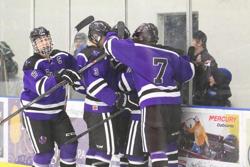 The Buffalo Bison coaching staff was hoping that their hockey team would be playing its best hockey as they ramped up to the post-season. Head Coach Aaron Johnson has seen the kind of progress that gives him hope that the Bison can make a section title run. “We have improved over the last few weeks. We have received more secondary scoring, have improved defensively, and played a more skilled game than we did earlier in the season.”

While Coach Johnson hoped to end the regular season on a winning streak, the Bison had a misstep and split the week’s games.

Buffalo faced off with the Princeton Tigers in a game with strong Mississippi-8 implications. A victory would grant the Bison sole procession of second place.

The game with a bang as Gunnar Goodmanson scored just 16 seconds in. Senior defenseman Justin Laven transitioned the puck to Jerame Schuetzle; Schuetzle drove the puck wide on the left wing and slipped the puck through two Tiger defenders. Goodmanson beat his man and one-touched the puck past Mattson.

After the Tigers took a 2-1 lead, senior winger Casey Anderson took a Hunter Thompson pass and scored on a sweet backhand to the top shelf, tying the game at two.

The Bison felt that the momentum of the game was in their favor when Schuetzle deposited a rebound for a 3-2 lead with just 32 seconds remaining in the first frame.

The second period saw the Bison have several high quality scoring chances and narrowly missed blowing the game wide open. “If we score on one of the grade-A chances early in the second we were going to run away with the game. But Princeton didn’t break and they capitalized on their opportunities,” lamented Coach Johnson.

The Tigers scored three straight goals, including an empty-netter, to hand the Bison their third conference loss. The loss dropped Buffalo into a tie for second place with Chisago Lakes. 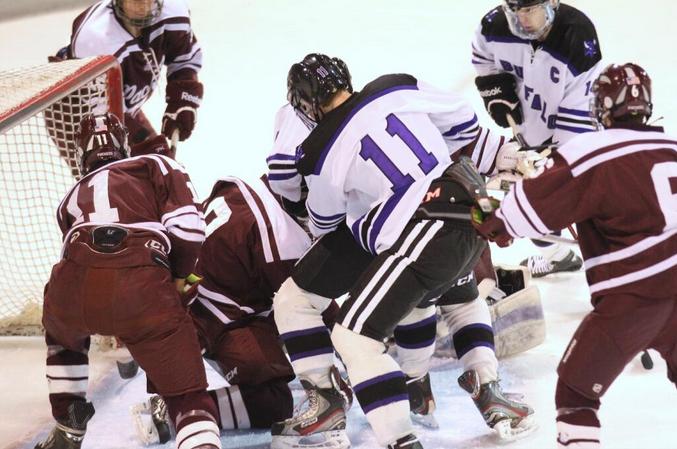 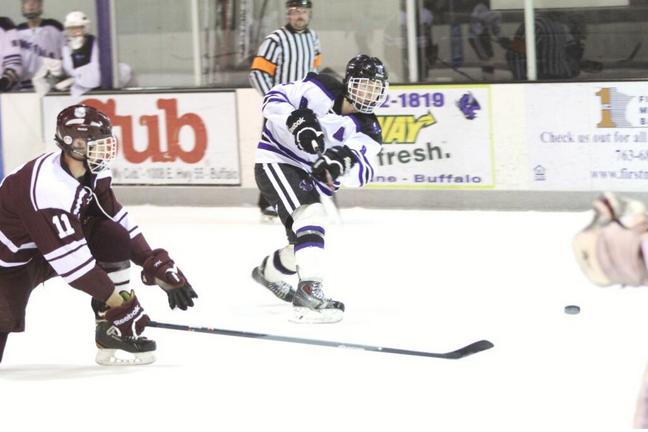 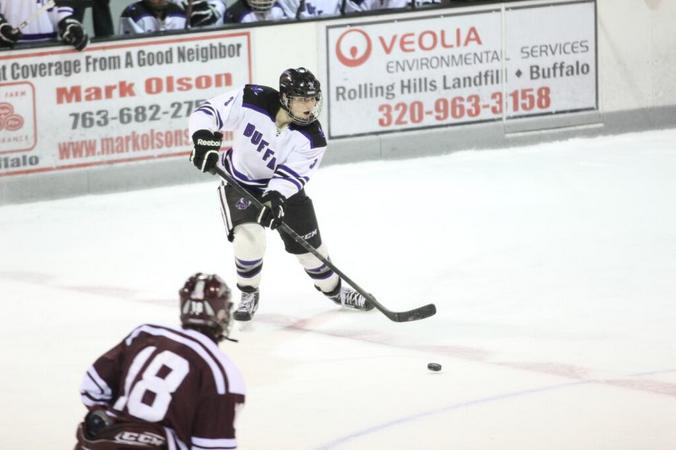 Bison too much for Packers 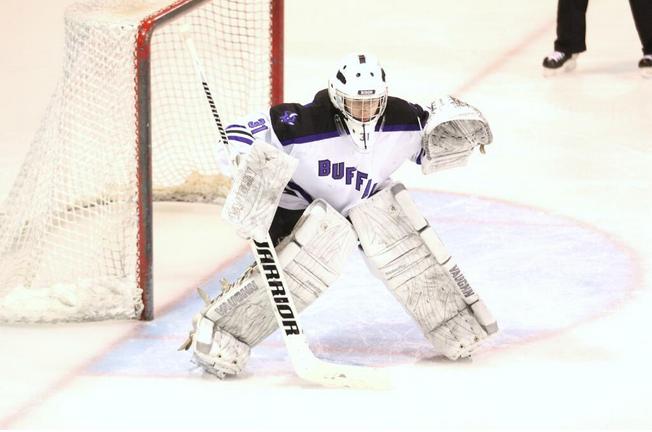 Senior netminder Mikey Otten was outstanding vs. the Packers. Otten made 19 saves to earn his 13th victory of the season.

The final game of the regular season pitted the Buffalo Bison against one of the most storied high school teams in the state. The South Saint Paul Packers traveled to the Buffalo Civic Center for a Saturday matinee match-up. The Packers play in the highly competitive Classic Suburban Conference and came into the game on a three game losing streak.

Led by the all-senior line of Wilson Anderle, Hunter Thompson, and Jake Michalko, the Bison gave the Packers no breathing room and set a high-tempo, physical pace to the game from the drop of the puck. Buffalo hammered South St. Paul in the first period.

Thompson gave Buffalo a 1-0 lead three minutes into the first. Thompson, Michalko, and Anderle all crashed the net and each took several whacks at a loose puck before Thompson chipped it in.

Senior winger Casey Anderson buried his ninth goal of the season just a minute-twenty later. Junior winger James McNamara drew a defender and slid Anderson the puck, springing Anderson for an in-tight breakaway. Anderson made a backhand move and snuck the biscuit through the five-hole.

The all-senior line connected again on the third goal for the Bison. Anderle began the shift with a 3-on-2 rush and a shot on goal, the Packers transitioned quickly for a 2-on-2 rush the opposite direction. Anderle ran down the puck carrier on the backcheck, stole the puck and started another 3-on-2 for the purple. Michalko left a pass for Thompson, who then found the trailing Anderle with a deft pass. Anderle then drove the puck at the Packer net and fired under the glove of goalie Kyle Jacobs.

Coach Johnson was thrilled with the work and determination of the captain Anderle and his linemates, “that is great example of the effort it takes to win and excel. Wilson has been a diligent and tenacious leader for us.”

Jerame Schuetzle continued his strong play scoring the fourth goal of the period. Gunnar Goodmanson fed Schuetzle from below the goal-line. Schuetzle received the pass moved laterally to his left opening up goalie Jacobs. Schuetzle fired a wrister to the upper right corner.

The opening frame also saw Bison goalie Mikey Otten snatch away any hopes the Packers had of keeping the game close. Otten’s glove snapped up the two quality chances the Packers had in the period and his play only further frustrated the visitors.

The second period saw the Bison extend their lead to 6-0. The fifth goal came from leading scorer Goodmanson on a 2-on-1 rush.  Goodmanson lasered a wrister that Jacobs could not squeeze for his 25th goal of the season.

The Buffalo power-play went to work for the sixth goal. Junior defenseman Reed Morehouse pounced on a loose puck at the top of the crease to complete the Bison scoring.

Despite a Packer goal early in the third, Buffalo played a complete game. “We had an entire team effort. Our goalie was outstanding, the defensemen were efficient, and all three lines scored. All phases of the game were solid,” stated Johnson.

With the victory, Buffalo finishes the season with a 15-8-2 record, a three win improvement from the previous season. Buffalo received the fifth seed in the sections tournament and travel to the fourth seed Bemidji (10-12-3). Bemidji defeated Buffalo 2-1 in overtime in the teams’ first meeting.