The State Fair Coliseum will cease making ice. The Section 5 and 4 doubleheader — the final high school games there — is Feb. 28. 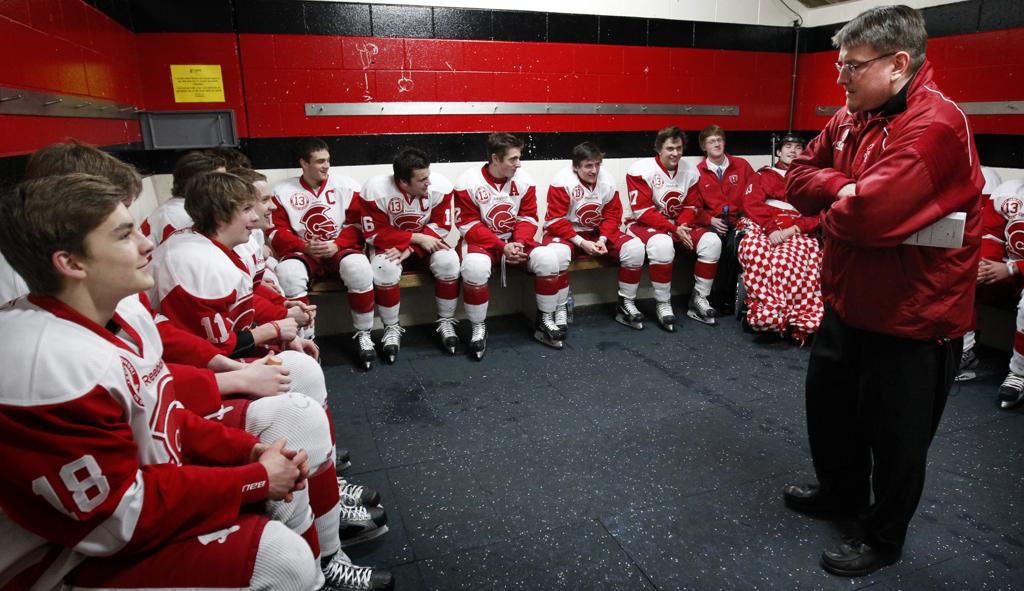 Benilde-St. Margaret's boys' coach Ken Pauly with his players before a section playoff game in 2012, when they won the title. Said Pauly, "Sometimes we talk too much about state and not enough about the sections."

The arrival of section playoffs this week means boys’ hockey teams are closer yet ­further than ever from fulfilling their state tournament dreams.

A season’s worth of clutch goals, rattling checks and raw emotion will be packed into three games spanning two weeks. The final 16 teams left standing advance to the Xcel Energy Center in St. Paul and take part in one of the nation’s renowned high school events.

But the journey, coaches said, can be just as thrilling as the destination.

“There’s nothing like the section playoffs,” said Duluth East coach Mike Randolph, whose teams have conquered their sections 14 times since 1991. “It’s two weeks of high school hockey at its best.”

Benilde-St. Margaret’s coach Ken Pauly, who has guided recent teams through the rock solid Class 2A, Section 6, called the section playoffs “one of those best-kept secrets. Sometimes we talk too much about state and not enough about the sections.”

Wayzata coach Pat O’Leary concurs. His Trojans hold the No. 1 seed and hope to defend their Section 6 title against the likes of Eden Prairie, Holy Family, Minnetonka and Pauly’s Red Knights.

“The games are always going to be good because you are either playing a premier program or a team you know pretty well,” O’Leary said. “Every game means something, and the reality of one-and-done brings the best out in kids.”

This year also signals an end of an era as the State Fair Coliseum will cease making ice. The Section 5 and 4 doubleheader — the final high school games there — is Feb. 28.

Blaine, in Section 5, and Hill-Murray, in Section 4, have dominated for the past decade and received the top seeds again this year.

“There aren’t assigned seats, but you always knew year after year where people sat,” Aus said. “Anyone who said that place was a dump has no idea.”

“It’s a cool old place and nothing will replace it,” Hill-Murray coach Bill Lechner said. “When you walked into the Coliseum, that told you, ‘It’s time.’ ”

That message is resonating in players’ heads this week wherever they begin their journey toward St. Paul.

“Sections are a bigger deal and kids lay it on the line,” Randolph said. “That’s what makes high school hockey so attractive this time of year. People who haven’t watched all year want to know when the playoffs start.”