Holy Family Catholic too much for Minnetonka 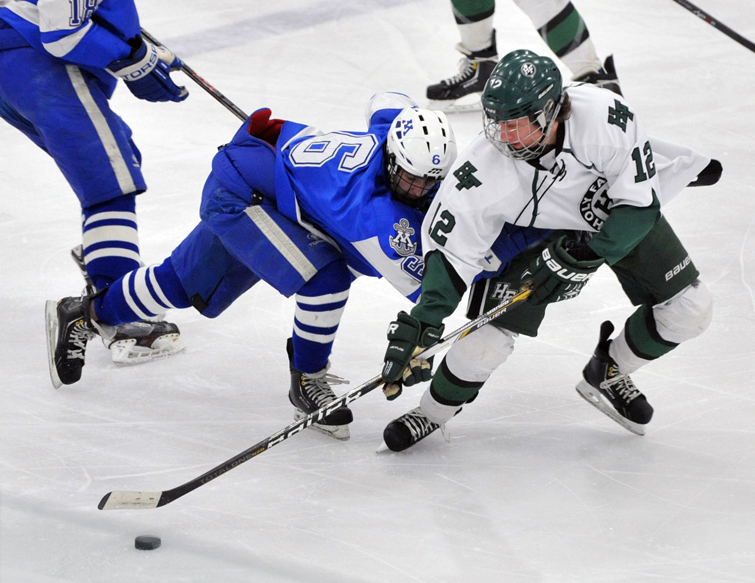 Bennett Hanson (12) of Holy Family Catholic tries to retain control of the puck while being checked by Jacob Klein (6) of Minnetonka. Photo by Katherine Matthews

Holy Family Catholic forgot to pack a parachute when it made the bold leap from Class 1A to 2A three years ago.

The Fire’s introduction to the intensely competitive Section 6AA circuit in 2012 ended in a 7-0 quarterfinal thrashing at the hands of Benilde-St. Margaret’s. Thud. They were routed again in the quarterfinals last season, losing 7-1 to Eden Prairie. Double thud.

Try No. 3 came Thursday night and, yet again, the Fire found themselves in the midst of a running time blowout in the section quarterfinals.

This time, though, there was no crash-and-burn finish. The bowed heads, tears and intense disappointment from years past were replaced by raised arms, celebratory head butts and ear-to-ear smiles after No. 3-seeded Holy Family Catholic’s 7-1 triumph over No. 6 Minnetonka at a jammed Victoria Recreation Center.

“It feels a lot better to be on the other side of it,” Holy Family Catholic junior forward John Peterson said. “We’ve been waiting a long time for it.

“Yeah, this one feels really good.”

Peterson and linemate Will Garin combined for five of the Fire’s seven goals. Holy Family Catholic led 2-0 after the first, 5-0 after the second and needed just 80 seconds of the third to build the lead to 6-0, enacting the state high school league rule (the “Mercy Rule”) that keeps the clock running even during stoppages when a team leads by six or more goals.

Holy Family Catholic, which went 19-5-1 during the regular season, used its superior speed and precision playmaking ability to both draw penalties and then capitalize on the ensuing power plays. The Fire scored four power-play goals and added one while they were shorthanded.

All three of Garin’s goals came on the power play.

“I was telling him all week he is not good in the big games,” Peterson said with a laugh about his buddy Garin, “and he really shoved it right back at me tonight.”

Garin was an eighth grader when the Fire received their decidedly rude introduction to the Section 6AA playoffs. He’s suffered plenty of tough losses during his career, and had some off-the-ice struggles, too. Garin, who scored 16 goals in 18 games during the regular season, missed seven games and lost 20 pounds while undergoing two surgeries on his neck to remove an infection.

“I was really sick in the hospital, and was pretty slow getting back into it,” Garin said.

Garin looked anything but slow on Thursday. He repeatedly snuck behind or burst around the Skippers’ defensemen on his way to prime scoring chances.

“This year we really feel like we’ve got something special,” Garin said. “We want to do it for the seniors. Not just for me, but for the whole program, it was a really big win for us.”