Red Knights get revenge on Wayzata 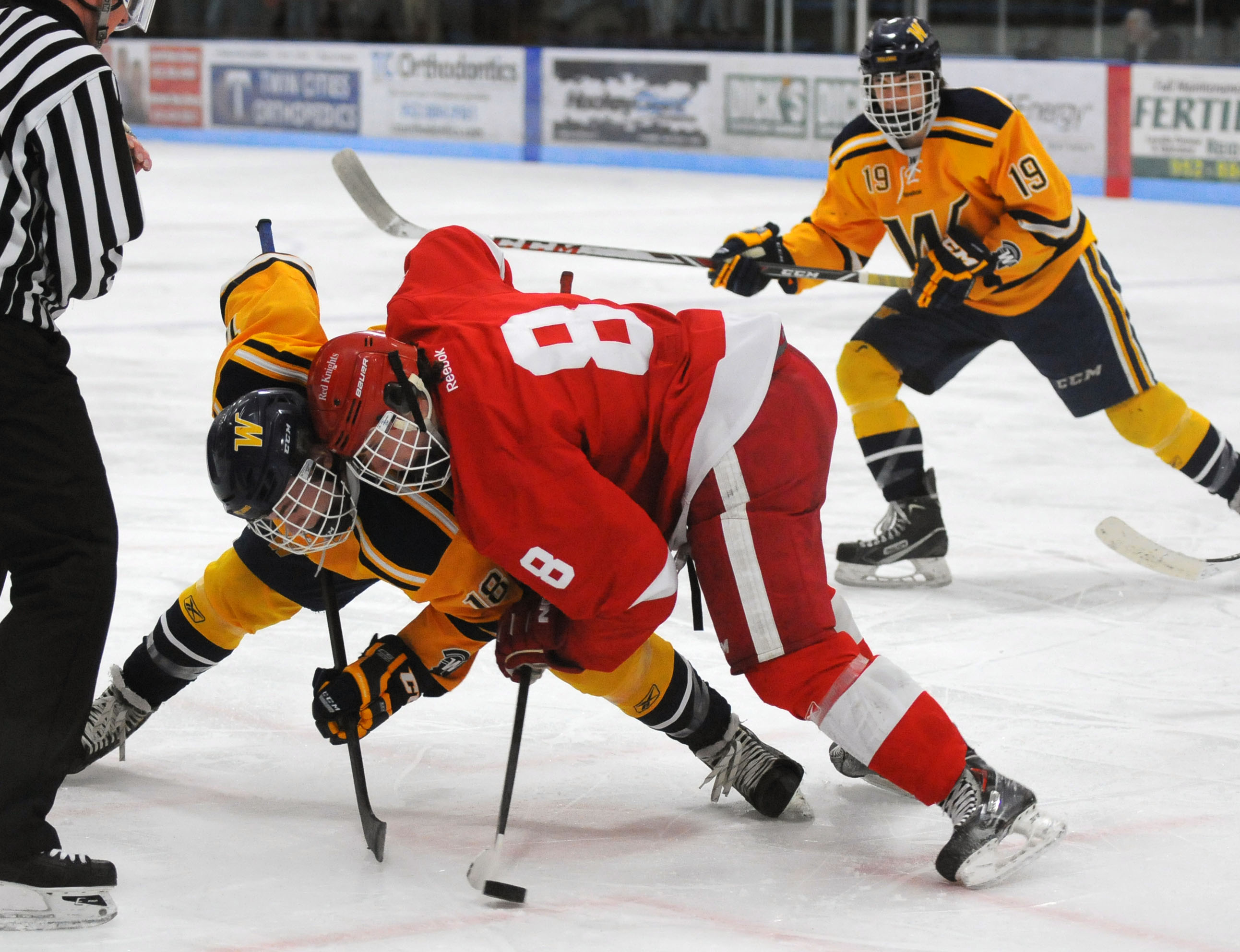 Last year Benilde-St. Margaret's had its heart broken in the Section 6AA finals by Wayzata, ending the run of the then defending Class 2A champion and eventual Mr. Hockey award winner Grant Besse.

In a section that can be regarded as a mini-state tournament, the fourth-seeded Red Knights gave top-seed Wayzata the bitter taste of disappointment with a 2-1 victory in the Section 6AA semifinals on Saturday at the Bloomington Ice Garden.

Wayzata has garnered the reputation as a strong, stingy defensive team that does not give up a lot of shots on goal. A team willing to eat a puck instead of it letting it get to its goalie.

The Trojans saw what it was like to actually play against that same style, with the likes of Benilde-St. Margaret's Johnny Austin and Ben Newhouse patrolling the front of the net, giving their goalie, Jalen Long, clear looks at almost every Trojans' shot.

"I was there in the third period thinking to myself, we are playing just like Wayzata," Red Knights' coach Ken Pauly said.

Benilde-St. Margaret's held Wayzata to only 18 shots on goal. The only one that went in was Alex Stevens' shot from the point with 57 seconds left in the third period.

Long made a handful of key saves, but other than that he didn't have much trouble.

"I have to give credit to my defense and guys like Johnny Austin," he said. "They were awesome tonight."

"We had to play smart and tough on defense," Austin said. "Last year they broke our hearts in the finals, and we didn't want that to happen again. I'm a senior, and we have a few others that are seniors, and I know that we did not want to lose to them to end our season again."

The Red Knights scored twice in the second in a two-minute span.

Flemming cashed in later when he took a pass from Meyer in the slot to beat Ahrens left leg pad.

"Ahrens is one of the best goalies in the state, so it was good for us to get two on him pretty early," Pauly said. "It set the tone for us as we really played well after we got those goals."

This is the third consecutive season that the No. 1 seed in Section 6AA will not advance to the state tournament.

Benilde-St. Margaret's magical ride in 2012 began when it beat Minnetonka in the section finals and went onto win the state Class 2A title.

Wayzata knocked the Red Knights out in the finals last season.

"You have to play your best in every game in this section," Austin said. "One through four, and even Hopkins at five, is really good. There is no night off at all as it is probably the toughest one in the state."

"The seedings don't even matter, especially when you get into the semifinals," Pauly said. "There are so many great teams that it's going to be a tough road and a well-earned trip to the state tournament."

Benilde-St. Margaret's will get its chance to return to St. Paul on Wednesday at Mariucci Arena when it takes on No. 2 seed Eden Prairie.

"All you want to have is chance," Long said. "Last year we had it, and it hurt not to make it back, so I know we are going to be really excited."