Top-seeded Hornets take down Prior Lake in Section 2AA semifinals 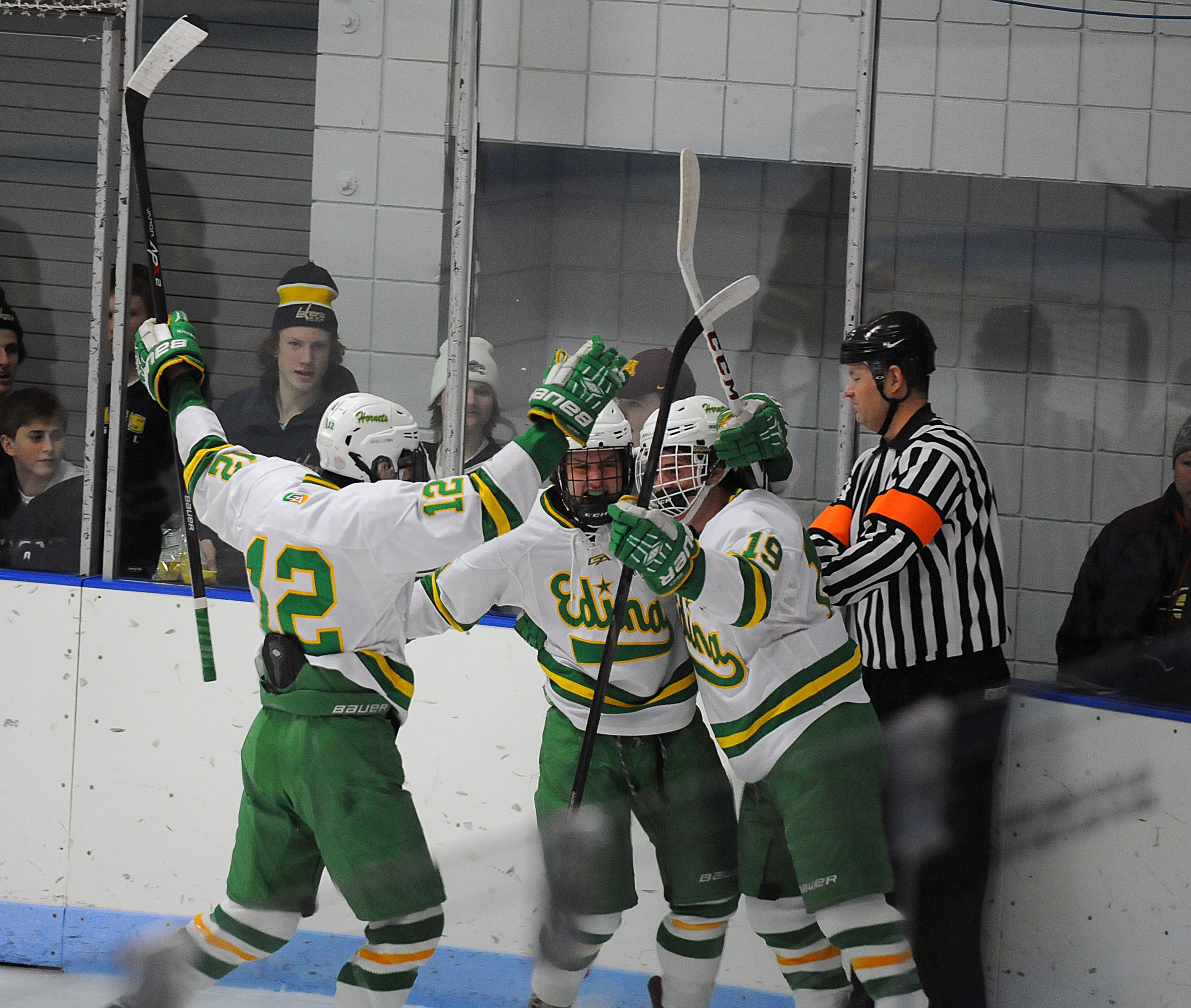 Edina forward Matt Masterman (right) celebrates with teammates Cullen Munson (middle) and Miguel Fidler (12) after he scores 13 seconds into the game in a Hornets 8-2 win over Prior Lake on Saturday. Photo by Rick Orndorf

Two hours before Edina took the ice at the Bloomington Ice Garden, one of its Lake Conference rivals, Wayzata, was upset in the Section 6AA semifinals.

The top-seeded Hornets put to bed any thought of an upset in the Section 2AA semifinals when Matt Masterman scored the first of two of his goals just 13 seconds into the game, which Edina won 8-2 against fourth-seed Prior Lake.

"It was big jumping out on them early," Masterman said. "Got a few quick ones in there and it got us going."

Edina was just plain too much for the Lakers, and that was evident early as the Hornets had a 20-3 shots advantage after the first period.

Masterson scored his second goal less than three minutes after his first and Edina led 3-0 by the midpoint of the first period.

"Anytime you get into these games, it it so important to come out strong," Edina coach Curt Giles said. "You don't want to mess around with teams in the playoffs because you just don't know what could happen."

Prior Lake's Connor Bump received a tripping penalty late in the first, so Edina started the second with the power play and took advantage.

Senior Miguel Fidler's shot in traffic got through to give the Hornets a 4-0 lead.

The Hornets were 2-for-4 with the man-advantage.

"I was very happy with how we played on the power play," Giles said. "It is something that we were able to work on, we moved the puck around well and got some great shots."

"With the bye we worked on our special teams and a lot with our power play," Masterman said. "We were pretty fresh from the time off but were able to get things going especially with the man-advantage."

Edina outshot the Lakers 39-14 and had five players with two or more points. Dylan Malmquist led the way with a goal and two assists.

The Hornets advance to the Section 2AA championship game on Wednesday night at Mariucci Arena to take on third-seed Bloomington Jefferson. The Jaguars beat Burnsville 3-1 on Saturday.

"We had a chance to watch them before we came here, and they are good," Giles said. "For the last couple of weeks they have played really well, so it is going to be a really fun game."

Last season Bloomington Jefferson had a 4-3 lead late in the third period against Edina in the section semifinals until Fidler tied the score and Matt Nelson tallied the game-winner with 49 seconds left in the third.

"We had that close one with them last year, and they are playing really good right now," Masterman said. "It's going to be a really good one."

Prior Lake vs. Edina