Hill-Murray's Anderson is poised beyond his years 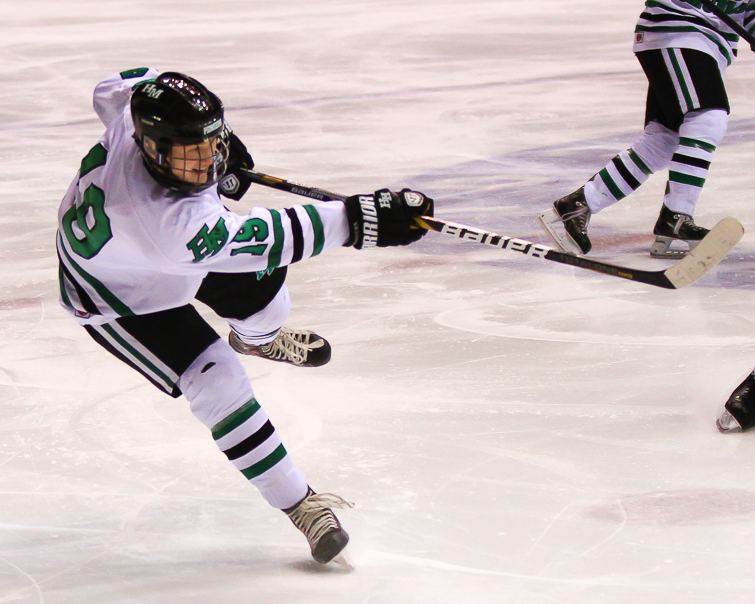 The Hill-Murray forward is big, strong, poised and oozing with the sort of puck savvy and stickhandling wizardry you’d expect out of only the most veteran of players. Anderson can play a gritty game, too, punishing opponents with board-rattling hits if so required.

Anderson, in his second season as a Pioneers mainstay and already committed to play at Minnesota-Duluth, put on quite a show against his old youth hockey association buddies Tuesday night at the State Fairgrounds Coliseum in St. Paul, scoring twice and just missing on a handful of other golden chances in a 5-1 Section 4AA semifinal rout of Roseville.

“He is a special player,” Hill-Murray senior Josh French said about Anderson, the Pioneers' scoring leader with 25 goals and 30 assists for 55 points in 27 games. “And whenever you are playing against your hometown it is always exciting.”

Anderson’s second goal was the prettiest of the night. It came on a backhand shot that rang in off the crossbar. He had to settle a bouncing puck down in the high slot before proceeding to put No. 1 seed and No. 3-state ranked Hill-Murray (24-3-0) ahead 3-0 midway through the second period.

“You see that every day in practice from him, so it’s not really a surprise when it happens in a game,” French said about Anderson’s highlight-reel goal. “He’s definitely fun to watch.”

Said Anderson, “I picked my head up once I got it under control. There was no one there, so I just took it in.”

Hill-Murray coach Bill Lechner has been preaching that straight-to-the-net approach all season. Anderson, French, Mitch Slattery and Zach Mills all are gifted with quick hands and slick passing skills. Sometimes, Lechner says, they try to get to cute when keeping it simple is the best approach.

The Pioneers, the state runner-up each of the last two seasons, were businesslike in their dismantling of the No. 4-seeded Raiders (16-8-3), generating numerous breakaways and 2-on-1s with their quick transitions and crisp passes out of the defensive zone.

“I feel like we put in a lot of work in the defensive end, getting going north and south,” said Anderson, who failed to score on a couple of breakaway chances.

Lechner, of course, wanted more to show for all those great scoring chances. But he’ll take the victory and one more chance to play out of the Coliseum’s locker room No. 4, the Pioneers’ staging area for so many victories over the decades.

And once again it will be a freshman among those leading the Pioneers when they play for the Section 4AA title on Friday night.
“Kind of yeah,” Lechner said when asked if he forgets sometimes that Anderson is just a freshman. “He’s a big strong kid. Joey has become a leader. There are moments where he is still a little boy, but on the hockey rink he is a good young man.”