In many ways Max Gaede is a normal Minnesota teenage boy.

Which is to say the Woodbury High senior’s life until recently has been focused mostly on playing hockey and having fun.

“He didn’t even have a car until about three days ago,” Eileen Gleeson said about her son. “He’s never had a car because he never went out and got a job. He’s been having to get rides from his buddies for years. How many seniors do you know nowadays who don’t have a car?”

As it turns out, transportation was the least of Gaede’s concerns this summer, when multiple high-level junior teams expressed an eagerness to acquire his services. In determining where he was going to play this season, Gaede became more Wall Street day trader than high-scoring hockey player.

Options, so many options.

Gaede, who scored 16 goals and had 44 points for a Royals team that went 21-4-2 last season, first was lured by the bright lights of Canadian major junior hockey before eventually saying no to the Western Hockey League’s Edmonton Oil Kings.

The USHL made its sales pitch, too. Gaede, a 6-foot-3, 190-pound forward, was wooed by the Sioux City (Iowa) Musketeers. That “no” was more difficult to deliver.

“That was a huge option,” said Gaede, who had developed a strong relationship with then-Musketeers coach Todd Knott. “That was the one where I was almost packing my bags.”

Then, in June, Knott accepted an assistant coach job at Minnesota State-Mankato.

Thanks in part to his connection with Knott, Gaede on Oct. 11 accepted a scholarship offer to play at MSU-Mankato. First, he will play his senior season at Woodbury. Gaede’s plan is to help the Royals not only reach the state Class AA tournament but, “we really want to win a championship.”

Gaede said there will be 18 seniors at tryouts when the high school season begins in mid-November. Many of those players are buddies Gaede has spent most of his life playing alongside.

“That’s the great part about it, I get to stay home and play with all my friends,” Gaede said. “I’m pretty excited about the whole season.

“At first (leaving Woodbury) wasn’t a big deal, but now after I made the decision, I realize I could have missed out. We’ve got a great team.”

“I think one of the things that keeps kids around, or should keep kids around, is the question they have to ask themselves is, ‘What will I miss if I leave?’ ” Bolin said. “They see something out there that could be or might be, but what they don’t understand is that there is a could be or might be right here. There are no guarantees here, either, but if your team does achieve any of those goals you would hate to miss out on it.”

Eileen Gleeson said Max didn’t start playing hockey until he was about 9 or 10. She remembers scrambling to outfit him for that first practice with equipment she bought used or scooped out of lost and found bins. Gaede exhibited great speed but little maneuverability in his first on-ice rush. As Eileen tells it, he barreled into the end boards at top speed.

“He could skate fast, but he couldn’t stop or turn or anything,” she said. “I was laughing so hard. Within minutes though he had figured it all out.”

Gaede has been a catalyst for Woodbury’s offense since he was a sophomore. He led the Royals’ with 28 assists last season, which ended with a 2-0 upset loss to Apple Valley in the Section 3AA semifinals. He recently was listed among players the NHL Central Scouting Service is tracking and was graded as a player with potential to be a late-round selection next summer in the NHL Entry Draft.

“He’s a guy we’ve had to worry about for a number of years,” said Rosemount coach Scott Macho, whose Irish lost both in the regular season and in the playoffs to Woodbury last season. "He’s very dynamic, very explosive. He’s not selfish, either. He’s not afraid to get the players around him involved. That’s what makes him very scary.”

Gaede’s favorite hockey games always have been the least structured. He has been a fixture at open hockey sessions and relishes any opportunity to unscrew the cage from his helmet.

To call Gaede “free-spirited” would be an understatement akin to calling a Lamborghini “high-performance.” Speaking of cars, Gaede’s new ride, a 1996 bright red BMW with a large rust patch on the driver’s side door, squares with his personality.

“We got him a small loan,” Eileen said. “And the pizza guy across the street will give Max a job.

“But not until hockey season is over.”

Editor's note: This article has been modified from its original version to correct Eileen Gleeson's name. 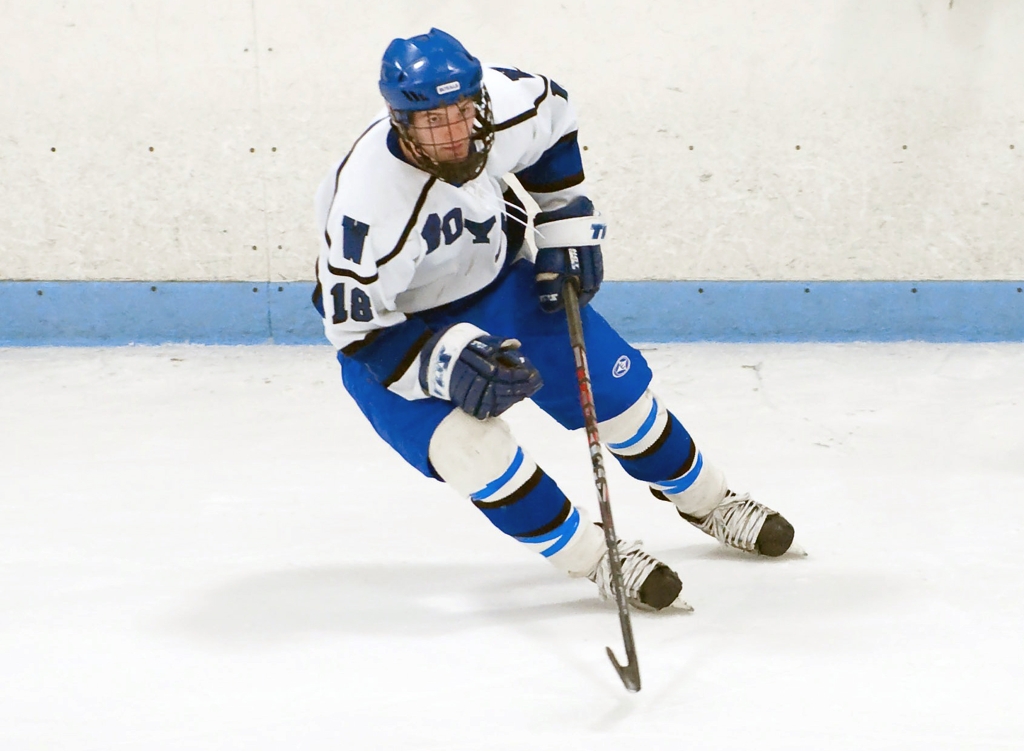