Centennial's Gorowsky at his best in biggest games 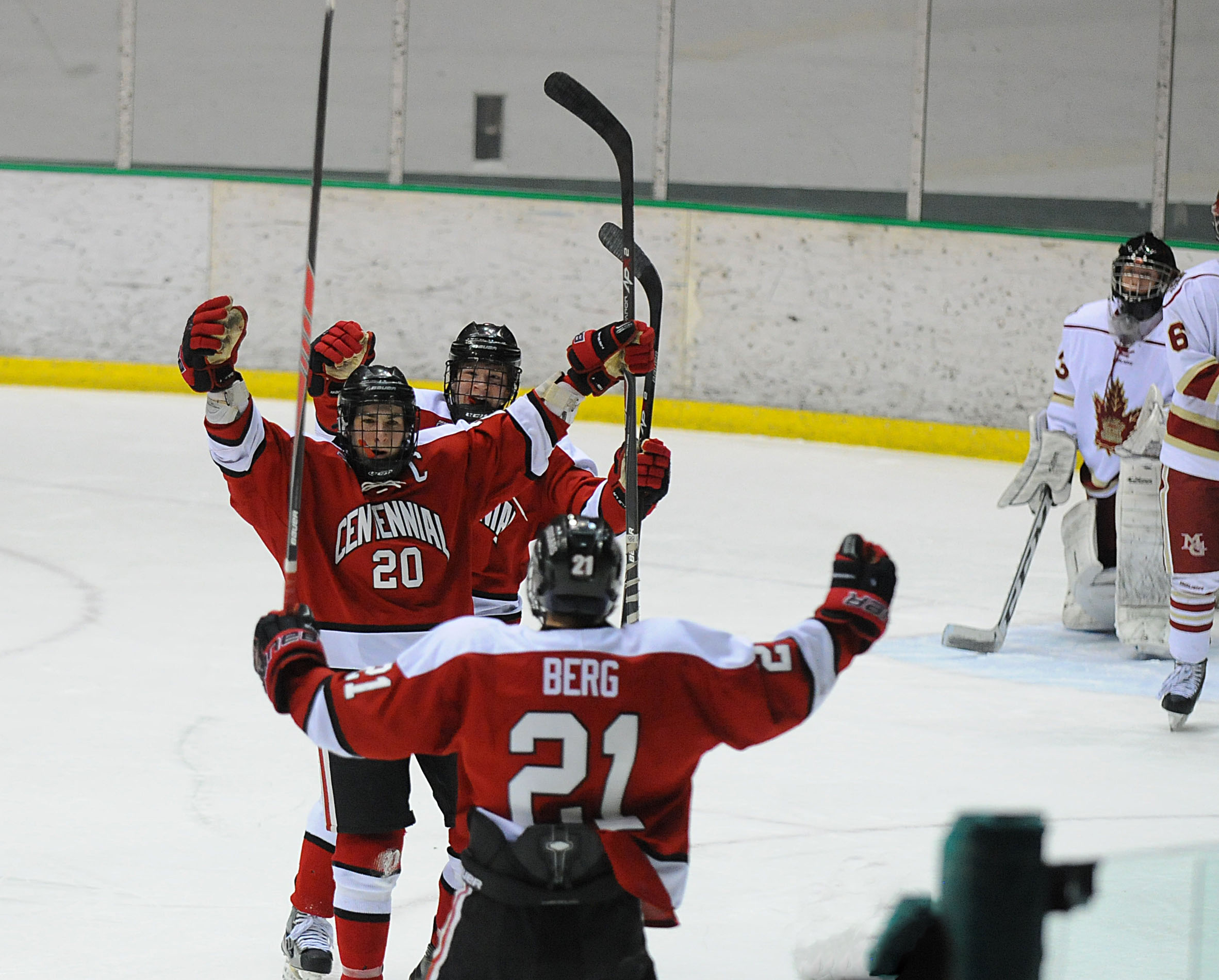 Centennial forward Rynar Gorowsky celebrates the first of his three goals in a 4-0 win over Maple Grove on Wednesday at the State Fairgrounds Coliseum. Photo by Rick Orndorf

Gorowsky hadn’t even made it into the locker room after scoring a hat trick in Wednesday’s 4-0 Section 5AA semifinal victory over Maple Grove and already he was looking ahead to Friday’s section championship against arch rival Blaine.

Even when the questions were about his dominant performance against the Crimson, Gorowsky's answers were zeroed in on the matchup with Blaine.

“He’s a gamer,” Menne said. “Say what you want about him, he plays hard, he produces. He’s huge. He’s huge in big games.

“He can play on my team any day of the week.”

Gorowsky isn’t the sort of player you want to play against. Now way. He’s fast, physical, chippy even. He’s a pest. And he can score. Oh boy, can he score.

Gorowsky’s best goal came with 4:16 left in the second period and put the No. 3-seeded Cougars ahead 2-0. He intercepted a pass at the Maple Grove blue line, walked down the slot and, after a few head fakes, whipped a backhander in off the crossbar. Crimson goaltender Brady Goodman never stood a chance.

Gorowsky had opened the scoring earlier in the second period, and he secured the win with an empty net goal in the closing minutes. He has 24 goals in 26 games this season, easily the most on the team.

Miller, who made 18 saves to register the shutout, said he and Gorowsky have been best friends since back in the first grade. The Cougars made all sorts of new friends after beating the No. 2-seeded Crimson, most of them from a student section that, inexplicably, went with a tropical theme Wednesday night.

“I went to kindergarten with Blake!” shouted a Cougars fan wearing a tank top and shorts as Miller walked to the locker room.

It was that sort of crazy, feel-good night for Centennial, which seemingly could do no wrong. A different team than the one that went winless in its first four games in February and finished the regular season with a 13-10-2 record.

“We are just playing really well right now,” Menne said. “We played Mounds View here the last game of the regular season. It felt like a good, solid 51-minute win.

“Everybody is blocking shots and doing whatever it takes to win. We’re pretty happy right now. We’re excited to see the Bengals on Friday.”