The Panthers are the second seed in Class 2A after qualifying for the 2013 tournament with a losing record. 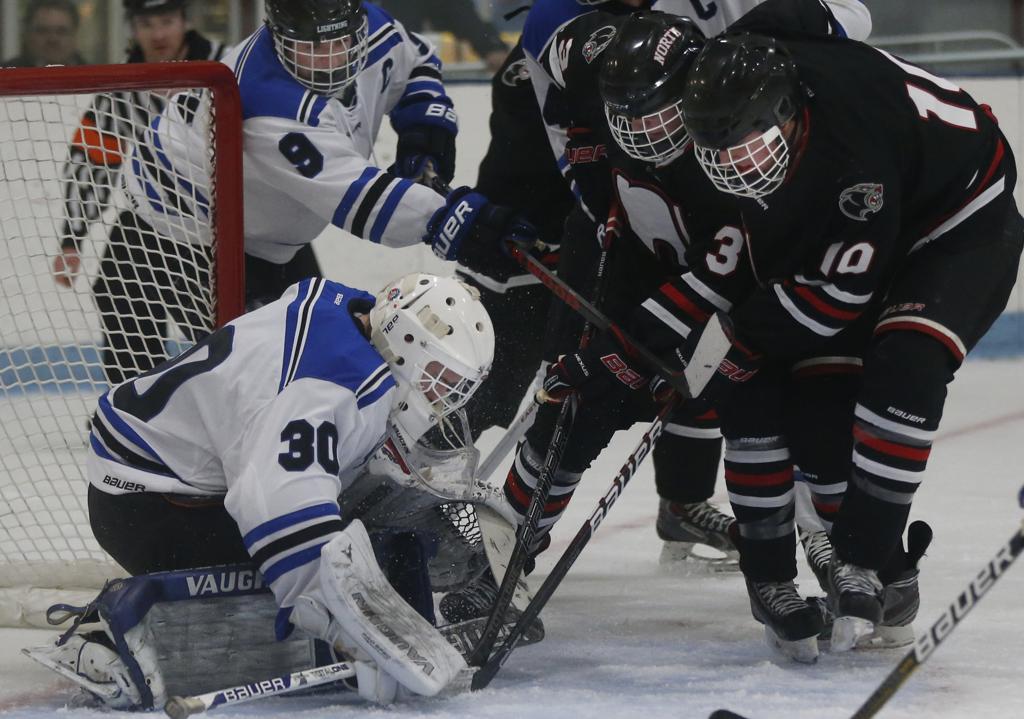 In a boys' hockey game between Eastview and Lakeville North, Eastview goalie Zach Driscoll and John Snodgrass defend against a rush of attackers including Jack Poehling(3) and Blake Rutt(10).]richard tsong-taatarii/rtsong-taatarii@startribune.com

What a difference a year makes for the Lakeville North’s boys’ hockey team.

The Panthers, chided last season by state tournament enthusiasts as the sub-.500 team from weak Section 1, are a heavyweight this time around. They received the No. 2 seed for the Class 2A tournament, which begins Thursday at the Xcel Energy Center. The Class 1A tournament starts Wednesday.

Panthers coach Trent Eigner called Saturday’s seeding process “relaxing because we knew we’d be in the top half of the bracket.” Teams in both classes are seeded No. 1 through 5. Lakeville North boasted a 23-4-1 record and a 4-0 mark against state tournament teams.

“Our overall message to players was, regardless of where we’re seeded, we knew we’d be a factor,” said Eigner, whose team will play Roseau in the quarterfinals. “That hasn’t always been the case.”

Defending champion Edina earned the No. 1 seed and plays first-time entrant Stillwater. No. 3 seed Eden Prairie plays Centennial. And No. 4 Duluth East takes on No. 5 Eagan.

For just the second time in the past 15 seasons, the Class 2A field lacks representation from a private school. Parity, however, is rampant. The eight Class 2A teams have combined for 58 losses, one fewer than last year’s record high in the eight years of tournament seeding.

Section playoff upsets paved the way. Eagan was a No. 4 seed in its section. Centennial and Stillwater were No. 3 seeds who stunned Blaine and Hill-Murray, respectively.

Before Friday’s upsets, Eden Prairie coach Lee Smith didn’t expect a state tournament seed. He still was “absolutely surprised” to be No. 3 over a Duluth East team that beat the Eagles this season.

“I don’t know if our draw is any better in terms of our opponent,” Smith said. “Centennial is a good team that beat Blaine and Duluth East.”

In Class 1A, East Grand Forks earned the No. 1 seed and takes on Orono. No. 2 Hermantown plays tournament newcomer Luverne (27-0-1), the only unbeaten team in either class. No. 3 New Prague makes its tournament debut against Chisago Lakes and No. 4 St. Cloud Cathedral plays No. 5 Totino-Grace in a matchup of the only two private schools in the field.