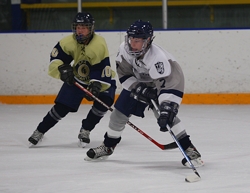 A new conference that covers territory from Moose Lake to Minneapolis, pushes west to Mora and includes a team from Wisconsin, would seem, at least geographically, something of a stretch.

But take a closer look at the Two Rivers Conference, a league set up exclusively for boys hockey, and perhaps the biggest question is, “What took so long?”

“We were in the Rum River Conference for many years,” Connaker said. “When that disbanded, we were left with nothing. I spent a lot of time making a lot of phone calls trying to find a conference for us to play in.”

The story is pretty much the same for the rest of the eight-team conference that also includes Meadow Creek Christian, Minneapolis East, Minneapolis West, Moose Lake, Mora, North Branch and Webster, Wis. All of those teams were independent programs struggling mightily to fill out their 25-game schedules before Connaker and Meadow Creek Christian athletic director Rick Peterson started working the phones.

“We had been trying to get in a conference for 10 or 12 or 15 years, however long it has been,” Moose Lake athletic director Kathy Fredricksen said. “It just always fell apart. When this came up I said, ‘Yes, yes, this is fantastic.’ ”

In the 1980s, Moose Lake was in a conference that stretched as far north as the Canadian border. Last season, the Rebels crisscrossed the state in an attempt to fill their schedule. They traveled north 130 miles to Ely. They played just less than two hours to the west in Crosby.

Several of Moose Lake's games had to be postponed or were canceled because of poor road conditions.

Road trips on two-lane highways through some of the state’s most rural areas still will be required for non-conference games, but as part of the Two Rivers Conference, the bulk of Moose Lake’s opponents now will be in the vicinity of I-35.

“Travel will actually be better for us now; we’ll go right down I-35,” Fredrickson said.

Given that Moose Lake, Pine City, North Branch and the Minneapolis schools are all within a slapshot of four-lane access, the I-35 Conference would have been a logical name for the league. However, the teams also all are based relatively close to either the St. Croix or Mississippi rivers. Thus, the more scenic-sounding Two Rivers Conference was born.

“It’s really a good thing for Minneapolis hockey to be in a conference,” Minneapolis West coach Tom Younghans said. “In recent years, for both us and Minneapolis East, nobody wanted us.

“Now, it will mean something to be an all-conference player. You are competing with these seven other teams, you can find a place for yourself. In the past, we’d say, 'Here’s an all-conference team,' and our conference (the Minneapolis City Conference) was two teams. It didn’t mean very much.”

An informal poll of several Two Rivers Conference athletic directors and coaches suggests there is no favorite to win the inaugural league title. Everyone associated with the conference agreed the Two Rivers will be nothing if not incredibly balanced.

Younghans’ Mustangs endured a tough 2008-09 seasons (they won just one game) as did Meadow Creek Christian, which when 4-21-0 in its first season as a varsity program. But both Minneapolis West and Meadow Creek Christian are expected to be vastly improved this season, making the conference even more difficult to handicap.

“We can compete with anyone when everybody comes to play,” Younghans said. “And I think that is true with the whole league. It isn’t like we are playing Holy Angels every night.”

“Every game should be a competitive, meaningful game,” said Dave Wicker, the athletic director at Minneapolis Patrick Henry who helps coordinate the Minneapolis West co-op program that consists of four Minneapolis schools (North, Patrick Henry, Southwest and Washburn). “At least that’s the hope.”

Wicker said that the league will be split into informal metro and northern divisions. Teams will play mostly within their division during the week and out of the division on weekends.

“The kids won’t be missing too much class time,” Wicker said. “We’ll be playing those (northern) schools and doing the most traveling on Saturdays.”

Moose Lake had the best record of any Two Rivers Conference team last season, posting a 20-5-1 mark that included an opening-round playoff loss to Sauk Rapids. Two of Moose Lake’s other losses were to Mora and Webster, teams that should be among the contenders for the conference title.

Five of the seven Minnesota schools (Meadow Creek Christian, Moose Lake, Mora, North Branch and Pine City) are Class A teams assigned to Section 5. Minneapolis East and Minneapolis West, both with combined enrollments over 3,000, are in Section 6AA. Webster ---- part of a five-school co-op named Burnett that also includes Frederic, Grantsburg, Luck and Siren ---- competes in Wisconsin’s Section 1. There is only one class for boys hockey in Wisconsin.

“Luckily I didn’t have too many of those when I played,” he said with a laugh. “Being on that yellow bus is tough one. But I think the benefits of this conference far outweigh any of that.”