Can Orono take down another boys' hockey power? 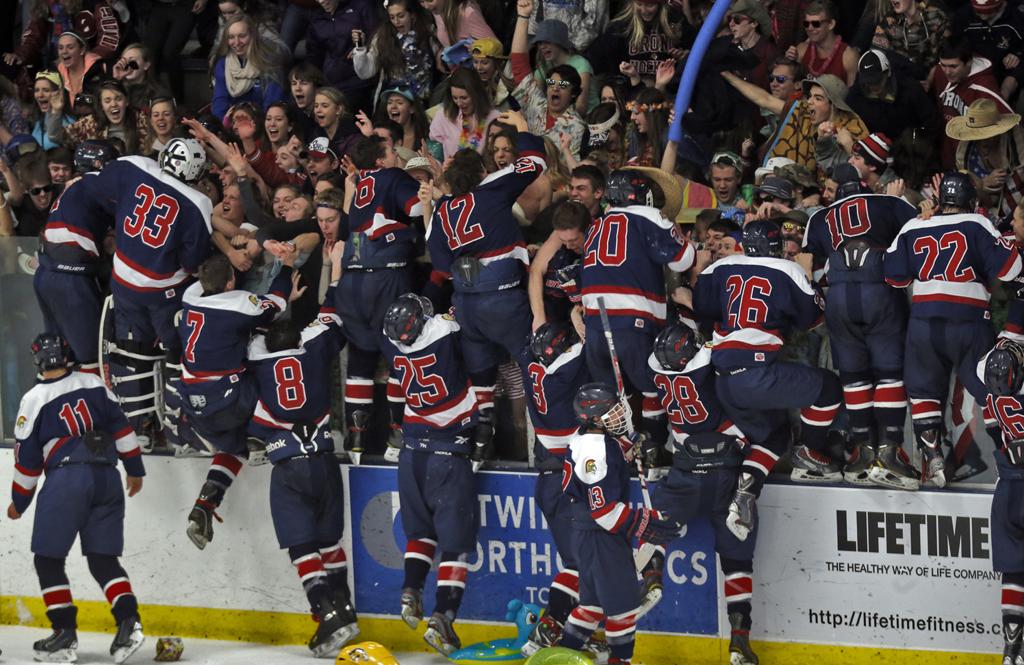 Orono players celebrated with the students in the stands at the end of the game. ] Boys hockey section final championship - Breck vs. Orono. Orono won 2-1. [ (MARLIN LEVISON/STARTRIBUNE(mlevison@startribune.com) ORG XMIT: MIN1402272111510653

“We think we can build Orono into a state contender year in and year out,” Yoder said. “That’s just part of why the win over Breck this year was so big.”

Orono’s next chance to slay a giant will come in the first round of the Class 1A state tournament. The Spartans will play top-seeded East Grand Forks at 6 p.m. Wednesday at Xcel Energy Center.

The return to state stems from several improvements that Yoder has brought to Orono, which had moderate success under previous coach Aaron Johnson.

The Spartans (19-8-1) have won four more games than they did last season, despite losing top point-scorer Gavin Payne and graduating several players. Payne transferred to Minnetonka in the offseason.

“We don’t talk about it,” Yoder said about the turnover. “I didn’t know the player that transferred out, so I never really knew what was lost there.”

Yoder’s fresh approach extends to his work off the ice. He has been working with Orono’s junior varsity team and local youth hockey programs to promote the varsity team. He and his staff have experience coaching youth hockey as well.

“I’ve seen him connect with Bantam and Peewee players before games,” senior Ellis Noerenberg said, “just kind of talking to them and kind of showing them what we’re all about.”

Yoder’s calm demeanor with his players has guided them through tough times, such as the game against Breck.

The Spartans fell behind early in the section final, but they quickly reversed the 1-0 deficit and seized the momentum. They stayed composed despite being outshot 47-20, which Noerenberg attributed to junior goalie Jonathon Flakne and to Yoder.

The Spartans’ team approach has carried them throughout the season. Nine players scored at least 10 points during the regular season, led by Flemmer and junior Joey Luedtke.

Yoder said the Spartans’ balance gives every player, not just the top scorers, confidence to lead the team in any game. He cited the section tournament, when sophomore David McCuskey scored four goals, including the overtime winner against Bloomington Kennedy in the semifinals.

“I think that’s kind of the recipe for success for a team in the playoffs,” Yoder said.

The victory against Breck held special significance because none of the Spartans players had beaten the Mustangs. The two teams had last faced off three years ago — Noerenberg and Flemmer’s freshman year — in the section final, which Breck won 4-3. The year before that, Breck defeated Orono 8-0 in the section semifinals.

The public-private school rivalry isn’t lost on the players, either.

“They’re a private school, so that just motivates you more to beat them,” Flemmer said.

Declaring the victory against Breck a shift of power might be premature. The Mustangs still own five of the past six Class 1A, Section 2 titles and the 2009 and 2010 state titles.

But it’s the perfect start to Yoder’s vision.

“We’re very happy to get to the [state] tournament; it’s a good experience,” Yoder said. “But as far as our program goes, we want to be on top, and that’s the expectation moving forward.”

Two west-metro teams will be competing in the Class 2A state tournament.

No. 3-seeded Eden Prairie will play Centennial at 1 p.m. Thursday. The Eagles advanced to the state tournament with a 3-2 overtime victory against Benilde-St. Margaret’s on Feb. 26.

Charlie Armitz is a student reporter at the University of Minnesota on assignment for the Star Tribune.