A group of “gamers’’ helped spark the Centennial boys’ hockey team’s return to the state tourney. 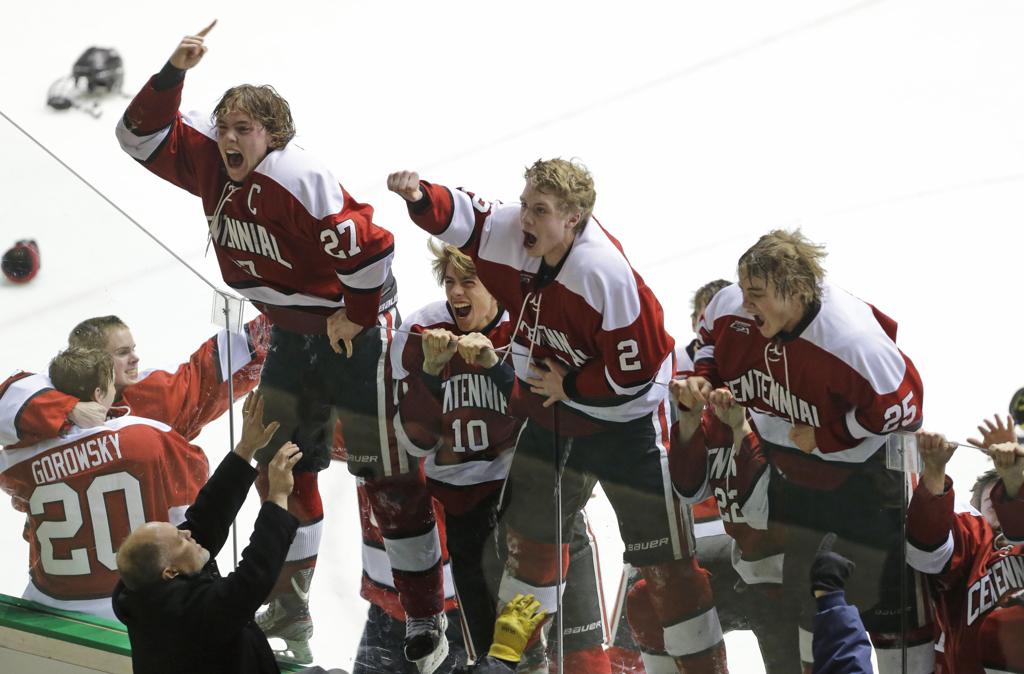 After losing at home on senior night, Centennial’s hockey players met to forge a path for their team.

Focusing less on a lukewarm win-loss record and building on a remarkable bedrock of leadership, the Cougars have not lost since that game against Elk River on Feb. 8.

The payoff came Friday with an upset of Class 2A, Section 5 top seed Blaine and a second consecutive trip to the state tournament. Centennial (16-10-2) opens play at 1 p.m. Thursday against No. 3 Eden Prairie.

The road back to Xcel Energy Center proved difficult. The team never won more than three consecutive games in the regular season after going 8-0-2 during a stretch in 2012-13. Two consecutive losses in February dropped the Cougars’ record to 11-10-1. The second loss, against Elk River, served as a turning point.

Eight teammates, who have served as captains on the school’s hockey, football, cross-country, soccer, baseball and lacrosse teams, helped Centennial get hot at the opportune moment.

“We have a lot of gamers,” said Adam Anderson, one four hockey captains. “This team knows how to win when it counts.”

Section 5 was Centennial’s proving ground. Four regular-season games against Maple Grove and Blaine yielded a 0-3-1 record. But the Cougars squared all accounts with upsets of the Crimson in the semifinals and then the Bengals in the final.

Collin Hughes tallied 11 of his 23 points this season during the team’s six-game unbeaten surge, including the eventual game-winner against Blaine.

Goaltender Blake Miller posted a pedestrian .887 saves percentage in the regular season. Nearly unbeatable in the playoffs, Miller stopped 97 percent of shots he faced. He shut down Blaine on his 18th birthday Friday, turning aside 38 of 39 Bengals shots.

“Scratch off lottery tickets for everybody; they’re on you,” joked Centennial assistant coach Ted Cheesebrough, who then patted Miller’s shoulder and said, “This guy has the heart of a champion.”

While playing center-midfielder for Centennial’s soccer team, Miller scored both goals in a 2-1 playoff upset of heavily favored Blaine.

When Blaine, ranked No. 1 earlier this season, cut the lead to 2-1 in the third period, the Cougars regrouped and refused to allow a tying goal. Such determination, grit and unselfish play have carried Centennial into a second consecutive state tournament.

“When we met in the back of our locker room and had a heart to heart, a lot of things were said, a lot of things changed after that and we started rolling,” Anderson said. “It was all about playing for each other.”