After increasing steadily for several years, attendance at the boys’ hockey tournament has fallen. 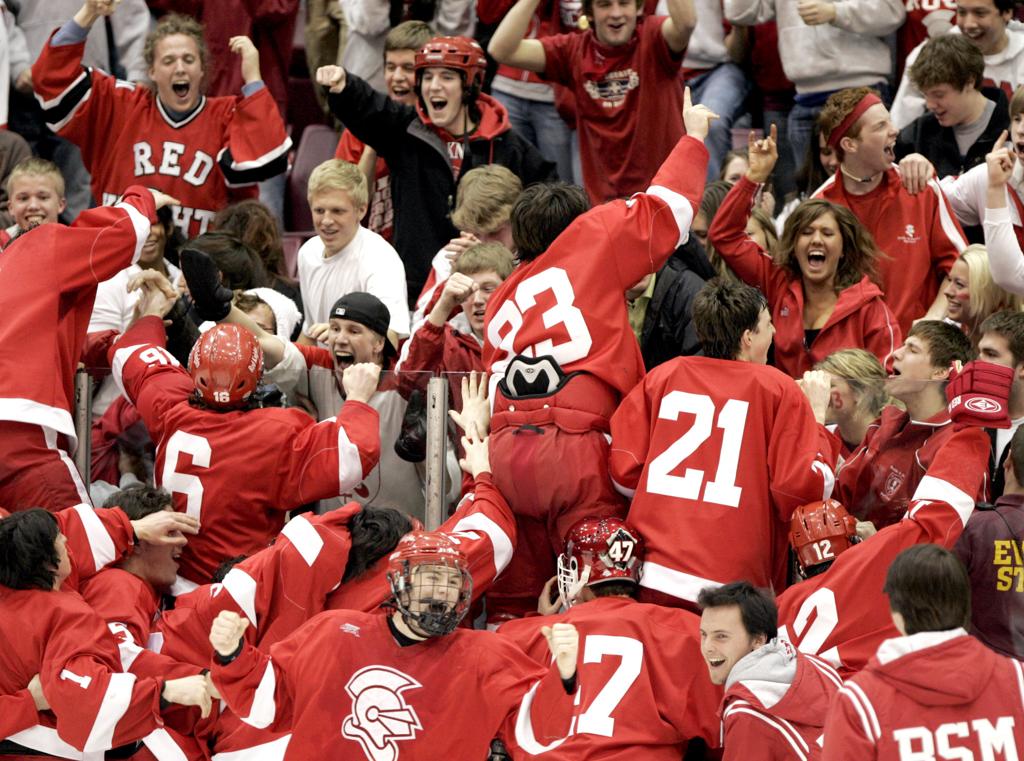 The hottest ticket in Minnesota high school sports has lost a bit of its allure.

After increasing steadily for several years and peaking in 2008, attendance at the boys’ hockey state tournament in St. Paul has fallen by 10 percent. Buffeted by the recession, the four-day extravaganza saw only an uptick in the year that Benilde-St. Margaret’s made an improbable title run after teammate Jack Jablonski’s life-changing spine injury.

This year a record number of top players gave up their prep careers to play out of state, assuring them of no chance of reaching the Xcel Energy Center’s coveted ice hockey stage. That trend has longtime hockey observers fretting about an inevitable drain on tournament excitement.

“With all the kids that are leaving, you could have trouble down the road,” said Tom Saterdalen, who coached Bloomington Jefferson to five state championships and still revels in what he calls the tournament’s “charisma and charm.”

But when the first puck is dropped Wednesday morning, it’s virtually certain that some fans will be holding season tickets that they’ve waited two or three years to obtain. By the time the Class 2A championship game ends Saturday, the tournament will have attracted more than 100,000 fans and likely reap more than $1 million in profit.

No other high school tournament even comes close to those numbers.

“Could the tournament be better? Yes,” said former coach Larry Hendrickson, whose Apple Valley team outlasted Duluth East in five overtimes in the 1996 semifinals. “Is it still great? Yes.”

Local hockey icon Lou Nanne cannot board a plane without someone mentioning the hockey tournament, making its 70th run this week. Regarded as the nation’s premier prep sports event, the tournament “is probably the most bulletproof sporting event outside of the Super Bowl or Final Four,” said Nanne, who will provide television color commentary for the 50th year.

The Minnesota State High School League, after injecting tournament seeding in 2007, is leery of making other changes to something it views as a roaring success. Hundreds of fans wait years for season tickets, while others plan winter escapes around this rink rat ritual no matter who is playing.

Increasingly, a top tier of talent is not among them. Before the season, a record 41 high school players opted to advance their careers throughout North America. Among them were 14 players who made Division I college commitments. By comparison, 12 Division I college-bound players will participate in the state tournament this week.

“Why is the tournament less popular? We don’t have all the players,” Hendrickson said. “The world has changed so the state tournament is not going to be the same. It’s still spectacular, but it’s different.”

One thing that isn’t different: The tournament is a stalwart moneymaker. It generated a record $1.1 million for the league in 2013 after expenses were considered and accounted for nearly half of the league’s tournament-related profit.

Thorne, who has called Olympics, the World Series and the Stanley Cup Finals, said, “I don’t keep a bucket list but if I did, I’d view this opportunity that way. This is a one-of-a-kind tournament.”

“If more people tune in for Gary Thorne, more power to them,” Silva said. “But I believe in the product — the coaches and the players on the ice.”

Last year’s 7.7 household share — the percentage of all televisions tuned to the tournament — was the fourth-highest in the nine years KSTC-TV has broadcast the tournament. The number was an increase of more than 40 percent from 2005. A spike to 9.7 came in 2012, from national attention to Jablonski’s injury and the Red Knights’ subsequent championship run.

“The boys’ hockey tournament is routinely the highest ratings delivery for not only all sports we air but all programming,” said Tom Glynn, KSTC-TV research director. In 2012, the station’s six top programs were all state tournament games.

About 800 names are on the high school league’s Class 2A season ticket waiting list. Rich Matter, league assistant director, said it takes “two to three years to run through the list.”

Nanne, who recalls a much longer wait years ago, said adding a second class 20 years ago “hurt the interest a little bit. The more you can’t get in, the more you want to go.”

The High School League lists each Class 2A game is a sellout based on paid attendance. Matter said about 3,800 season-ticket holders account for 11,000 seats. Participating schools each receive 1,400 to 1,500 tickets. Unsold tickets are made available to the public one hour before the start of a session.

Stead contends “the tournament is still as important as it’s always been.” He cited factors such as weather and the economy for keeping some fans away.

The league has considered adding a skills competition to attract more fans, Stead said. But logistics proved too challenging. And a sense of tradition has the league loath to make changes.

Teams were seeded beginning with the 2007 tournament in hopes of generating more interest in Friday evening’s semifinal doubleheader involving Class 2A teams. Since the tournament began at the Xcel Center in 2001, average attendance on Friday night has increased from 18,337 fans from 2001 to 2006 to 18,884 from 2007 to 2013.