The Green Wave gave up more than two goals for only the third time this season. 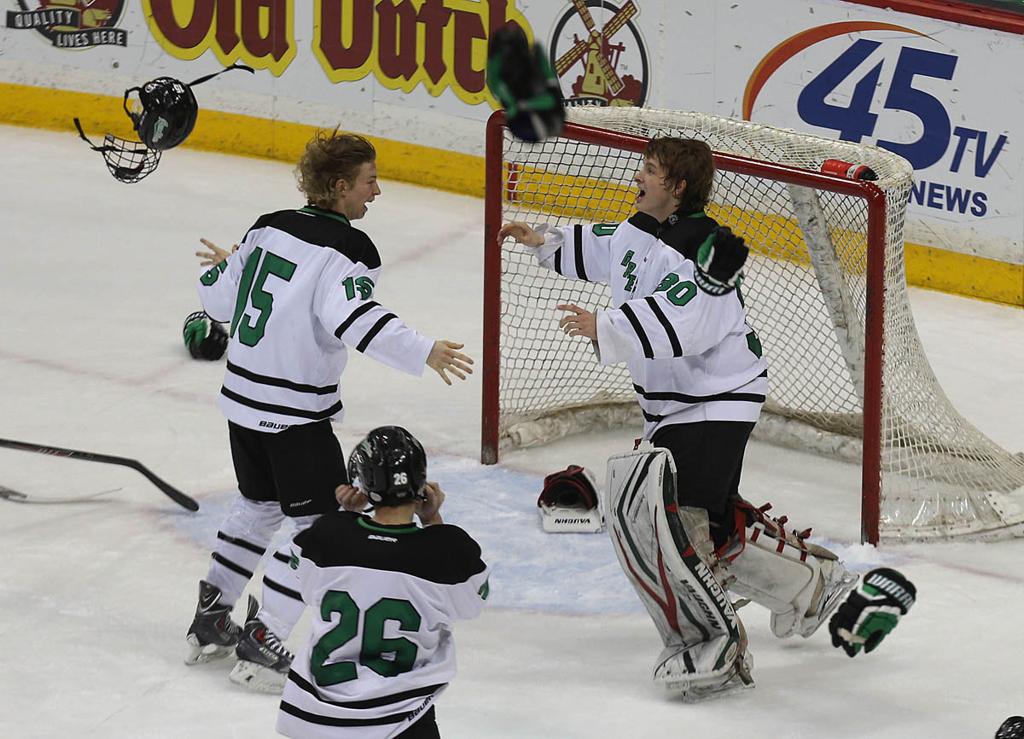 East Grand Forks players Josh Weber (right) and Trevor Selk threw their equipment in the air as the final buzzer sounded to end the game.

A teary eyed Scott Wasbotten of Hermantown was headed to the postgame media conference room when he bumped into East Grand Forks defensemen Tye Ausmus and Eddie Eades in a hallway deep underneath Xcel Energy Center.

For Wasbotten, even in the aftermath of East Grand Forks’ 7-3 triumph over Hermantown in the Class 1A boys’ hockey tournament championship game, there was no escaping the clutches of the Green Wave’s deep and seemingly impenetrable defensive corps.

“They are all big kids, and they play hard hockey,” said Wasbotten, who played with Ausmus, Eades and Colton Poolman, another standout East Grand Forks defenseman, on Team North last fall in the Upper Midwest High School Elite League. “They just put their heads down and keep playing. Nothing can stop them, really. They are all great players, and they are just tough to beat.”

Led by their terrific trio, the Green Wave’s defensive stats this season were dizzying. Top-ranked and top-seeded East Grand Forks (28-2-1) gave up 30 goals in 25 regular-season games, behind only the 29 by fellow Class 1A state qualifier Luverne.

Counting Saturday’s victory over the Hawks, East Grand Forks gave up more than two goals in only three games. And Hermantown’s third goal in the championship came with the Green Wave leading by five late in the third period. Class 2A state tournament qualifier Roseau also scored a garbage-time goal in an eventual 8-3 Green Wave regular season victory.

More mind-boggling numbers come courtesy of a Green Wave’s penalty killing unit that operated at an unheard of success rate of over 90 percent, easily among the state’s best. That unit was tested four times in the first period against Hermantown, and the Hawks could muster only the occasional scoring chance while being held scoreless.

“It’s pretty cool to have a penalty killing percentage over 90,” said the 6-foot-5 Eades, who scored the Green Wave’s second goal and is the son of former Warroad coach Cary Eades. “That’s pretty impressive. When you are shorthanded and stuff, you just have to outwork the power plays. We were pretty aggressive.”