Scoggins: Joy and pain in Class 1A boys' hockey final 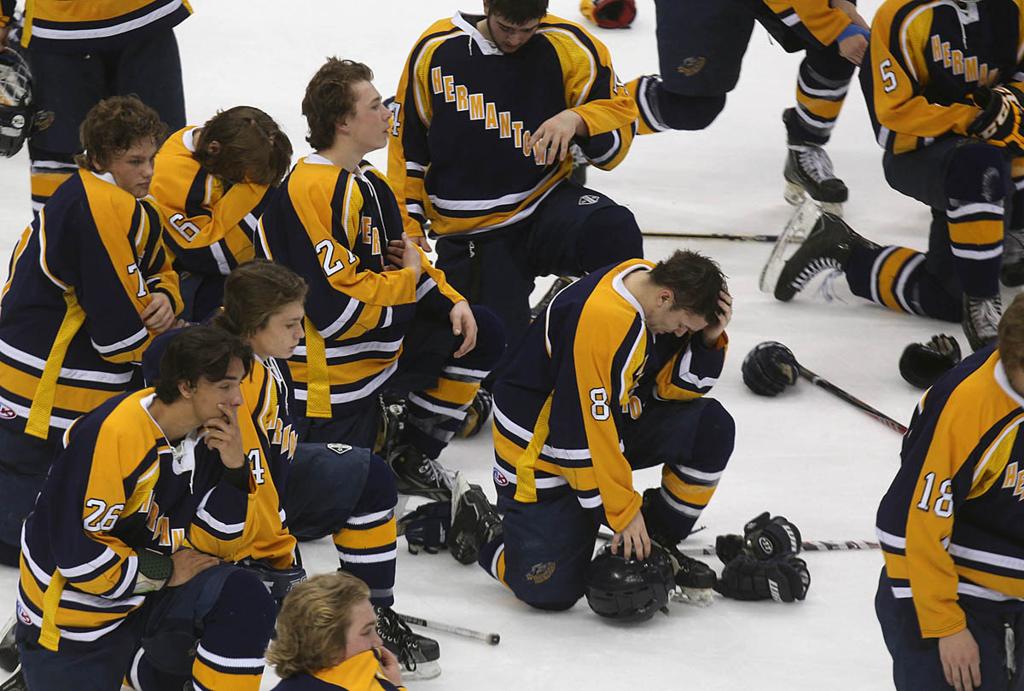 Bruce Plante stood on the bench, arms folded and his baseball hat tilted back, as he watched yet another state championship celebration by the opposing team.

In the past, that scene usually was followed by a testy rebuttal by Plante in his postgame press conference. A long-standing critic of private school hockey, Plante never left anyone wondering where he stood on the issue after his team lost four consecutive state championship games to private schools. He’s a master at presenting his anger in a comical manner.

Plante chose a different tact and tone after his program added a second-place finish for the thumb on Saturday. Plante tipped his hat and admitted that his team lost to a better team, a public school team, a highly skilled East Grand Forks squad that overwhelmed Hermantown in a 7-3 victory to claim its first Class 1A state title.

Nothing controversial about a fifth consecutive runner-up trophy.

“It feels a lot better losing to East Grand than anybody that we’ve lost to, I’ll tell you that,” Plante said, offering another jab at private schools. “They’re the same kind of simple program like we are. But it’s still second place.”

Plante has managed to find twisted humor in being a perpetual bridesmaid — never mind that he actually won the 2007 state championship at Hermantown in an undefeated season. He’s a salty character who makes state high school league officials nervous because he speaks his mind rather than peddle political correctness.

Plante occasionally uses colorful language in interviews and refused to back off his private school vs. public school crusade. His face was still red as a stop sign long after his team lost to St. Thomas Academy for a third consecutive season on a goal in the final seconds last year.

“I will never forget this one,” he said that day.

Plante seems to revel in the tough-luck narrative, too. It’s like watching Charlie Brown miss the football, only to get up and try again.

“If it didn’t hurt so much I would laugh,” he said.

On the eve of Saturday’s title game, he feigned concern that another second-place finish might force him to become a recluse in Hermantown.

Runner-up No. 5 won’t require much reflection on what went wrong. East Grand Forks simply is a superior team in all areas. The Green Wave scored five goals in the second period and removed any doubt as to who is the best team in Class 1A.

Plante shouldn’t worry about showing his face around town after this loss.

“That was just a joke,” he noted. “I’m kind of a loner guy anyway. The only place I’ll catch a little bit is at the rink and it will be in fun. The people in Hermantown have treated me great. The parents are not trying to run me out because we take second place. I don’t see any reason why I can’t go out in public.”

Plante admitted he’ll consider turning over the program to someone else after 25 seasons in charge. At age 65, he views coaching through a year-to-year lens now. He described coaching as a “pretty big sack of rocks on your back after a while. It gets heavy.”

“I’ve always said if the players stop listening then it’s time to go,” he said. “Or if the parents start bugging me or getting on my butt, then I’m going to leave. I tell the parents that before the season. I say, ‘If you want to start [complaining] at me, then I’m gone.’ ”

Hopefully, Plante decides to keep going because the state tournament is far more interesting when he’s involved. Another second-place finish probably feels like a boulder in that bag of rocks, but his team went about as far as it could.

The Hawks lost to a public school team that had better talent and played at the top of its game. It’s hard to get upset over that.