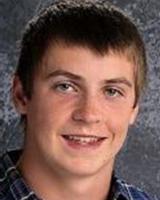 “We still wanted to come home with some hardware and leave our name in the program,” assistant captain Ryan Meany said.

Having spotted Eden Prairie a 4-1 first period lead in Thursday’s quarterfinals, Centennial made it a game before falling 4-3. One day later against Roseau, the Cougars trailed 4-2 after two periods. Meany, a junior, assisted on a goal to cut the deficit to 4-3 but an empty-net goal gave the Rams a 5-3 victory.

“We battled back from a deficit in both games at state so we can be proud of that,” Meany said.

Meany, who plays quarterback for the football team and is a defenseman in hockey, spoke with Star Tribune reporter David La Vaque about maintaining his status as standout-two sport athlete and the thrill of helping Centennial to a second consecutive hockey state tournament.

Q: What sort of reflecting have you done on how special of a hockey season this was?

A: You know, we did a lot better than we were supposed to this year. Beating Blaine in the section final was huge because we hadn’t beaten them in a couple years. That was fun; it was a memorable night. The last two years, we haven’t won a game at state but hopefully next year and in the years to come we can get a couple more wins there.

Q: Last year you probably benefited from Champlin Park knocking Blaine out in the section playoffs. This year you had to face them. So was there some added legitimacy to making it to state this year?

A: Yeah, [assistant] coach [Gary] Tolkinen told all the defensemen, ‘I want Blaine to play its best game because we’re that good and we want to show that we can beat Blaine at its best.’ And they played a great game and so did we. It made it more special that it was the last night of hockey at the State Fair Coliseum.

Q: It’s so hard these days to be an impact athlete in any sport unless you’re really focused on it. You have had a positive effect on two Centennial teams so I’m curious how you divide up your spring and summer training to make that possible.

A: In the spring we have a weight program right after school for football. When it comes to summer, about three days a week we will have hockey training. After that I’ll get a football workout. For football we work out four to five days per week, we have practice one day and we do some 7-on-7 passing stuff. So my schedule is packed.

Q: Do you favor one sport?

Q: What is important for you to model as a senior next year for your teammates in both sports?

A: Obviously, I’ll try to model hard work. We have to help the younger guys get better every day. If we don’t do that, especially in hockey, we won’t be sitting there with our hands in the air at the section final. It’s not easy. That’s what I’ll tell them.