Coaches clinics go back in time

Twenty years ago Lee Smith was just another fresh faced young hockey coach breaking into the business. Assigned the junior varsity at Eden Prairie High, Smith had his first team but hardly an overabundance of know-how.

That’s why, looking back, Smith remembers vividly attending his first few annual coaches clinics. He soaked in every detail. He hung on every word.

“When I started going to the coaches clinics, they always had the college coaches that were speaking,” Smith said. “That was good, but what I really looked forward to was when guys like Willard Ikola, Tom Saterdalen, Tom Osiecki, Larry Hendrickson ---- some of the legends of high school coaching in that state that I looked up to at the time and still do today ---- were speaking to the group.”

Twenty years later, as part of this year’s annual fall coaches clinics in Mankato on Oct. 22-24, it was Smith who was one of the featured speakers. Smith was invited to address the group by Minnesota Hockey Coaches Association Executive Director Mike MacMillan, who revived an old fall clinic tradition by asking the coach of the defending state champion to give a speech.

Given his fond memories from those long-ago coaches clinics, Smith, who guided Eden Prairie to the state Class AA title last season, was happy to oblige.

“There aren’t many secrets in hockey,” Smith said. “I just shared some of the things we do in Eden Prairie.”

Entering his 17th season as Eden Prairie’s head coach, Smith last season guided the Eagles to a 28-3-0 record. The Eagles beat Moorhead 3-0 in the championship game. Eden Prairie defenseman Nick Leddy was named Minnesota’s Mr. Hockey and later was drafted by the Minnesota Wild in the first round of the NHL Entry Draft.

“It is always interesting to get college coaches in front of us,” Hopkins coach Chad Nyberg said. “But we also have a lot of talented high school coaches in this state. For them to share their thoughts and opinions is equally as valuable to listen to.”

Other highlights from the coaches clinics included:

---- An appearance by USHL commissioner Skip Prince, who addressed the general membership and expressed a desire to improve communications between the state’s high school coaches association and his league.

---- A presentation on the “American Development Model” by USA Hockey’s Ken Martel and Guy Gosselin.

During his speech, Smith, who has a 300-114-22 career record at Eden Prairie and has led the Eagles to four state tournament appearances, listed the names of state high school coaches he respects.

“I gave the coaches names of guys that, I think, if they want to see guys who are doing it right, they could talk to those people,” Smith said.

He also talked about the importance of asking questions and studying how other teams and coaches operate.

“When you go to watch a practice, if you like a drill, implement it into what you are doing,” he said. “Whether it is something they can implement, something that is useful or not, I don’t know, but I gave them something to think about.” 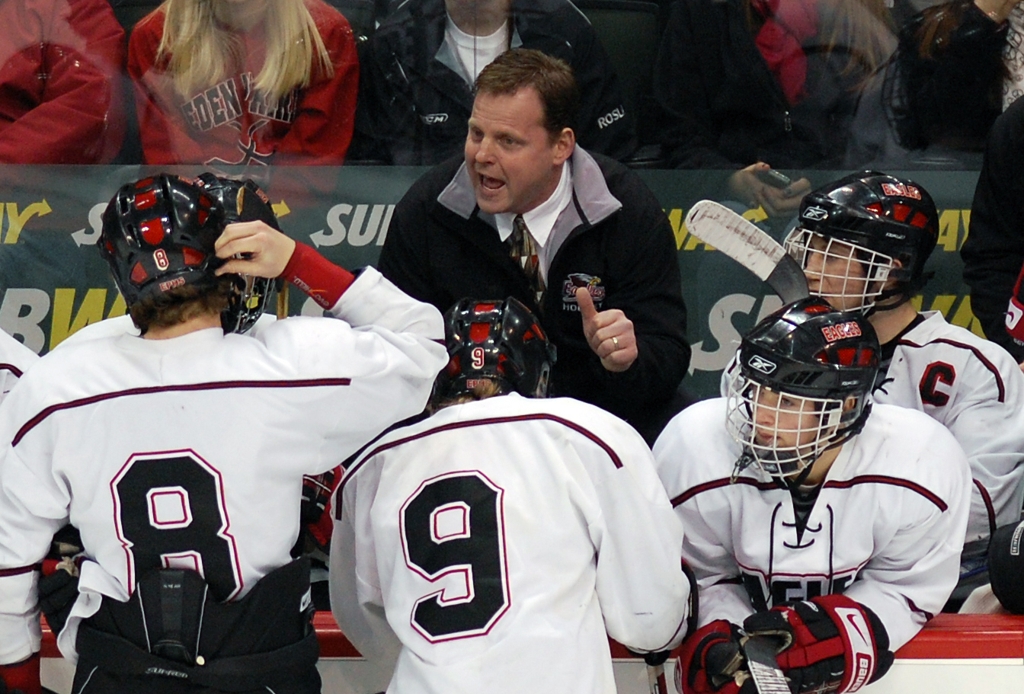