State's checking rules in prep hockey get a national hearing

Tougher penalties for checking from behind and boarding unlikely to be adopted nationally. 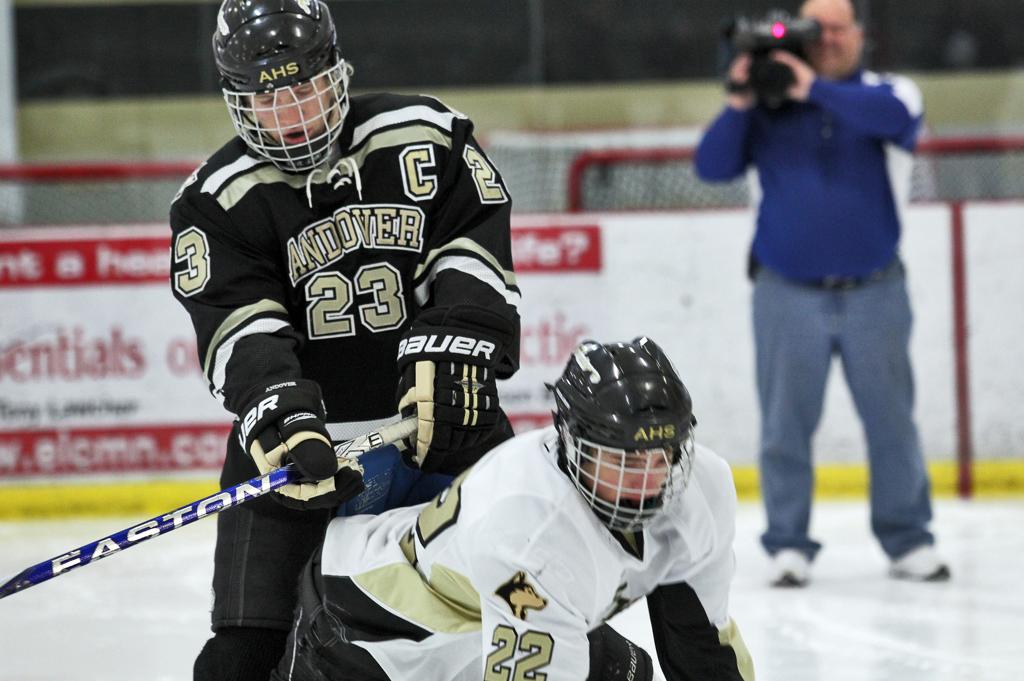 The Minnesota High School Athletic Association will announce stricter rules and penalties for hockey players who are called for checking a player in the back or sending players flying into the boards of a rink. Officials conducted a video session with An

Minnesota will try next week to bring the nation in line with its view of tougher high school hockey penalties for violent hits amid signs that it will be a tough sell.

The Minnesota State High School League will request that every state high school association enforce five-minute major penalties for checking from behind and boarding. Minnesota experimented with tougher penalties for the past 2½ seasons since Jack Jablonski suffered a spinal cord injury from a check from behind into the boards.

If denied by the National Federation of State High School Associations, Minnesota would either have to follow more lenient national rules on checking from behind or go its own way and lose valuable representation on the NFHS ice hockey rules committee.

MSHSL associate director Craig Perry, who recently joined that committee, will present to his peers on Monday and Tuesday in Indianapolis. A decision could take three weeks.

Supporters of Minnesota’s rules believe no distinction should exist as to where the illegal check occurs.

“I’ll be very adamant that we believe a major is the right way to go,” Perry said. “I’ll have the rationale and what I’ve got from our coaches and officials and put in the committee’s hands.”

C.J. Beaurline, a member of the national ice hockey rules committee from 2009 to ’12, said a previous attempt to use Minnesota’s tougher penalties nationwide “never even got to a vote.” He said six members of the 10-person committee remain and he “sensed no person there was in favor.”

Enamored these days with the NHL playoffs, Jablonski is less wild about eroding tougher penalties for the illegal hit that changed his life.

“No matter what, if you hit from behind there should be consequences, and they should be the most severe consequences possible,” said Jablonski, now a senior at Benilde-St. Margaret’s. “It’s the most dangerous play in hockey.”

Benilde-St. Margaret’s coach Ken Pauly worries less severe penalties for boarding and checking from behind will increase the level of accepted violence.

Pauly and other hockey observers noticed a different game in the wake of Jablonski’s injury. Play along the boards was less reckless as players wrapped up instead of crushed each other. But a respectful tone soured this season.

“We had kids on other teams say, ‘I’m going to Jablonski you’ ” three times in junior varsity games this season, Pauly said. Such callous remarks, he said, reflect a “subculture within this game” that prefers a more physical brand of hockey.

Minnesota’s swift and unprecedented changes, approved and implemented within days after Jablonski was hurt, have drawn more curiosity than consensus at the national level.

“States like Massachusetts and Ohio were not having as much concern with a reckless nature of play that needed these rules,” Beaurline said.

Bill Kronschnabel, director of officials for Minnesota’s high school league, said, “I haven’t heard enough from other states to go with what we’ve got.”

Support waned locally as well. Minnesota Hockey, made up of 40,000 youth players, followed the high school league’s lead by elevating checking from behind and boarding penalties to five-minute majors and 10-minute misconducts.

An emotional vote prevented Minnesota Hockey from repealing those stiffer penalties before the 2012-13 season. But before last season, it quietly shifted to less-stringent USA Hockey rules.

“It seems like a lot of people saw what we did as an emotional response to a tragic event,” Pauly said. “Across the country, I don’t think people feel that same level of passion.”

Go your own way?

Perry remains confident in Minnesota’s influence on national hockey affairs. Two years ago, the NFHS made all checking from behind penalties flagrant and automatically ejected the offending player. Perry said he and others successfully lobbied to make the ejection discretionary.

If denied next week, Minnesota has shown a willingness to deviate. Perry said Minnesota high school wrestling does not adhere to the national rule for weight certification process.

Penalty data from the past 2½ seasons will be compiled later this week, Perry said. He said he believes the numbers will reflect a safer, more subdued approach to checking.

“We’re seeing smarter decisions by hockey players, coaches are teaching it with more education and sincerity, and it’s being accepted up in the stands,” Perry said.

But will it be accepted as a national standard?

“Some people think a five-minute major is the end of the world,” Perry said. “I’m hopeful that they will see the intention of a higher penalty to work as a partial deterrent has helped.”