Best of the best 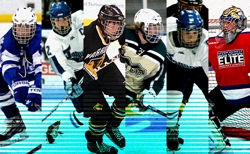 This fall Brock Nelson and Caleb Herbert were dominant players in a league loaded with superstars.

Nelson, from Warroad, and Herbert, from Bloomington Jefferson, were high-scoring centers in the Upper Midwest High School Elite League. They played on competing teams during the league’s regular season but joined forces on an all-star team of all-stars ---- Minnesota Red ---- for a season-ending tournament that culminated with a stunning 10-3 triumph over Shattuck-St. Mary’s in the championship game.

Nelson and Herbert, both seniors, didn’t play on the same line for Minnesota Red, instead serving as catalysts on equally dominant forward lines.

In assembling the MN Hockey Hub’s inaugural preseason all-state team, however, the speedy, slippery seniors have been grouped with St. Francis senior and super-scorer Joey Benik.

Benik, meanwhile, played in the Minnesota Junior Hockey League, where he scored 11 goals in nine games. Four of those goals came in one game, which wouldn’t be an unusual outburst for Benik except that, amazingly, three of them came while his Minnesota Owls were shorthanded.

Bloomington Jefferson’s Joe Faust and Minnetonka’s Troy Hesketh, both seniors, are the first-team preseason all-state defenseman. Faust scored 45 points last season for the Jaguars while Hesketh was a third-round pick (71st overall) by the Edmonton Oilers in the NHL Entry Draft in June.

Thief River Falls senior Zane Gothberg, another dominant player in the Elite League this fall, is the first-team goaltender. Gothberg and Faust teamed with Nelson and Herbert on the Minnesota Red team that won its three games in the Elite League’s postseason tournament by a combined score of 20-4.