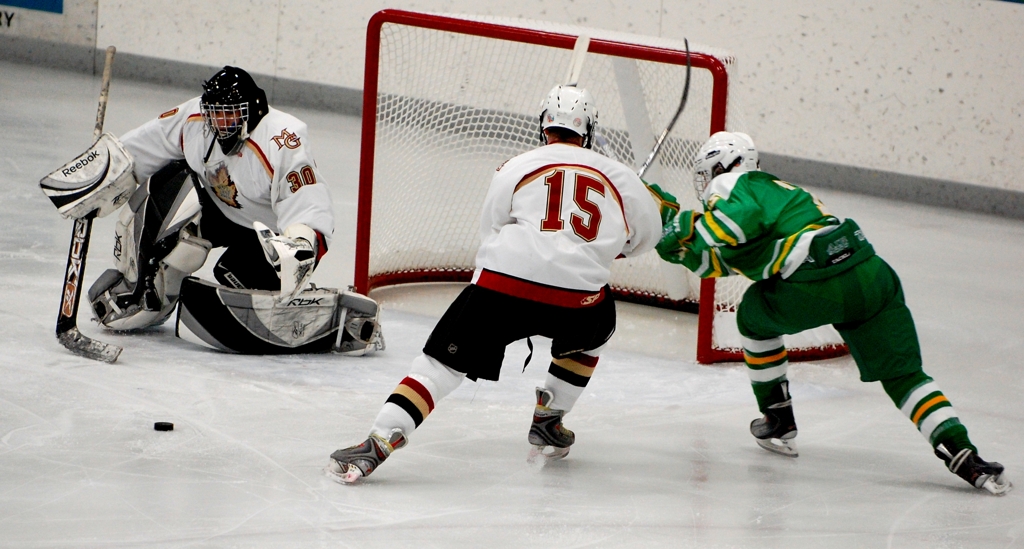 Maple Grove goaltender Ryan Coyne stopped 19 of 21 shots, with many of those saves of the spectacular variety, in the Crimson's 2-1 loss to Edina on Friday. Photo by Helen Nelson

Edina’s Charlie Taft scored a spectacular goal on a solo rush early in the third period to give the Hornets a 2-1 victory over Maple Grove during a Turkey Trot Tournament opening-round game Friday at the Plymouth Ice Center.

Taft's goal came 4 minutes, 10 seconds into the third period on an assist from Jake Heck and extended a pattern of the teams trading goals ---- one in each period.

In the second peroid, Maple Grove’s Andrew Kaufmann took a nifty pass from Adam Reichert and deposited it in the upper corner of the net to pull the Crimson into a 1-1 tie with Edina, No. 9 in the MN Hockey Hub’s preseason rankings, heading into the third period.

Reichert did the bulk of the work on the Crimson goal, stealing the puck at center ice, skating it into the Edina zone and drawing a defender and Hornets goaltender John Ankeny to his side of the ice before feeding the puck to Kaufmann.

Senior forward Brett Stolpestad and freshman defenseman Reno Paker were credited with assists on Cutshall’s goal that came with 7: 42 left in the opening period.

Edina controlled play for most of the first period and held a 5-4 shots on goal advantage. The Hornets finished with a 23-14 edge in shots.

Senior forward scores Bobby Orr-style goal in the third period (flying headfirst through the crease) to give Hornets the win.

Maple Grove's junior goaltender made 19 saves and almost all of them were of the high-quality variety.

Edina junior defenseman was smooth and steady in the defensive zone and helped create a few quality scoring chances.