One start, one shutout

One start, one shutout

In his first varsity start, Virginia/Mountain Iron-Buhl goaltender Casey Myhre certainly proved worthy of the starting nod given him by coach Keith Hendrickson.

The senior netminder turned away Cloquet-Esko-Carlton at every opportunity, stopping all 39 shots he faced in a 3-0 shutout Saturday, Nov. 28, at the Cloquet Area Recreation Center.

“To play the way he did on the road, it’s great for him. He’s a great kid,” Hendrickson said.

Myhre got all the support he needed from junior Travis Eddy, who tallied two goals and an assist. His offensive efforts were welcomed, after the Blue Devils were shut out on 45 shots the previous night, losing 3-0 to Mound-Westonka in their home opener. Hendrickson was pleased with his team’s effort, but was looking to get in the win column.

“It was big to get a win from a psychological standpoint. Going 0-2 versus going 1-1 and beating Cloquet in their place (was big),” Hendrickson said.

None of Myhre’s saves were bigger than during a 5-on-3 Cloquet power play late in the third period with Virginia clinging to a 2-0 lead. For just over a minute of game time, the Lumberjacks hammered away at Myhre trying to get back into the game.

First, the bearded netminder stymied junior Jack McFarlane with a sprawling toe save when it appeared the Lumberjacks’ leading returning scorer had an open net. Then he shut down sophomore Adam Hanson with a glove save, holding the puck high for all to see.

“On a 5-on-3, the biggest, most important penalty killer is the goaltender, and he made the stops,” Hendrickson said. “He found a lot of pucks through traffic and he was very good.”

Cloquet came out in its season opener looking to use the body. The Lumberjacks finished checks all over the ice throughout the first period, but Virginia didn’t back down. The opening 17 minutes saw 34 minutes in penalties as both teams tried to establish an intimidation factor.

“They played physical, but we have a lot of players who don’t mind playing that way as well,” Hendrickson said.

The Blue Devils got on the board first during one of their power plays, as Eddy buried a loose puck at the 9:02 mark with an assist to Jordan Krebsbach. It was Virginia’s first goal of the season after nearly 60 minutes of scoreless action.

The game remained 1-0 in favor of the Blue Devils until 9:55 of the third period, when Virginia junior forward Troy Nichols cut in from the right side across the slot and ripped a wrister into the top of the net to make it 2-0.

Eddy closed out the scoring with a goal with just 1:23 remaining. 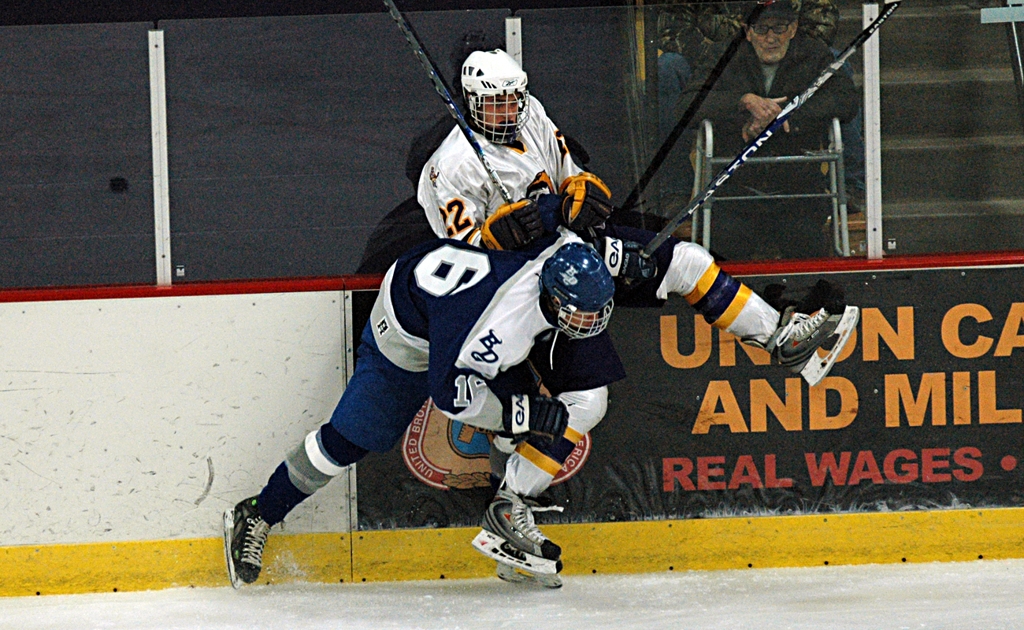 1. Casey Myhre
In his first varsity start, Myhre proved more than up to the task of replacing All-State goaltender Will Lustig, as he stopped all 39 Cloquet-Esko-Carlton shots for a shutout.

2. Travis Eddy
Eddy, a junior forward for Virginia-MIB, provided two goals and an assist.  It was a welcome outburst for the Blue Devils, who were shut out in their first game.

3. Garrett Hendrickson
When Cloquet set a physical tone early in the game, it was Hendrickson who responded in kind for the Blue Devils, showing they weren't going to back down from physical play.