Family, big dreams have Blaine coach off to Brainerd

After 14 years guiding the Bengals, Dave Aus is departing. 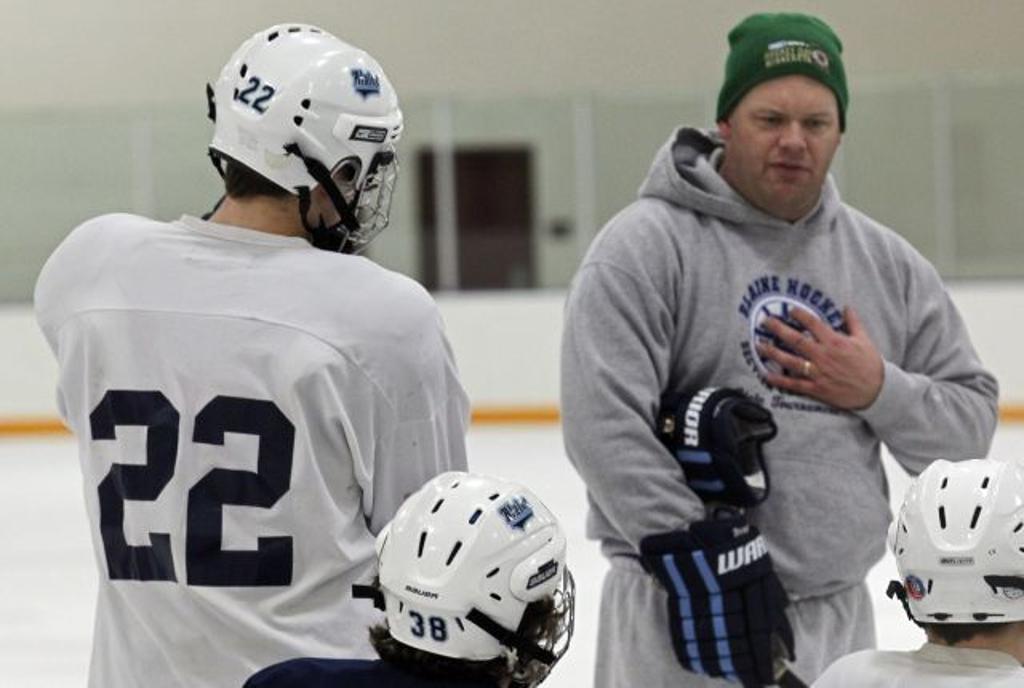 After 14 years at Blaine, Aus sought a small town for his family and a program with big dreams. Brainerd provided both.

Word of Aus’ move from Blaine, a suburban powerhouse he coached to six consecutive state tournaments, to Brainerd, a smaller program in search of its first tournament appearance, spread fast through the coaching ranks and surprised several of his peers.

Aus took the helm of a Blaine program back in 2000 fresh off its first Class 2A state championship. Under Aus, the Bengals reached the state tournament six consecutive times from 2006 to 2011, finishing as high as third.

Just reaching state would be huge for Brainerd’s program. The Warriors were section runners-up in 1991, 2012 and 2013.

Brainerd’s school board recently voted not to renew the contract of boys’ hockey coach Jim Archibald. He coached the program for the past seven seasons, winning six consecutive Central Lakes Conference titles.

Q: What sort of reaction did your announcement get at Blaine on Friday morning?

A: There were about 20 players there but only five or six that I’ve coached. A lot of the returning guys were JV this year. It was hard because you get to caring about the kids. Riley Tufte and Easton Brodzinski were the third brothers in their families that I coached. They both gave me a hug. But Blaine is going to have good years ahead.

Q: How were you received in Brainerd on Friday afternoon?

A: It was a lot of fun. There were about 20 players there, some parents, youth hockey people and [long-time Brainerd football coach] Ron Stolski. I was nervous so I prepared a few notes but I got there and realized I left them in our family’s other vehicle. The people there were excited but I’m sure there were people disappointed because of the way Jim left. But that’s coaching. I’m sure some people at Blaine are glad and some are disappointed.

Q: What elements are important to a program’s success?

A: There were several things that helped at Blaine that are in place in Brainerd. We’ve got two rinks, a weightlifting facility and a locker room where kids can hang out and not worry about their equipment freezing in their cars. What’s different in Brainerd is there are a lot of multi-sport athletes, which I support.

Q: How big a role did your family play in your decision to take the Brainerd job?

A: Family was first and foremost. For many years at Blaine, the expectations were to win and get to state. And that’s great. But as I get older, I look at how that wore me out. I told the kids at Brainerd on Friday, we are going to have fun, compete to win and learn life lessons. Sometimes those lessons are great. Sometimes they are hard.

Q: How do you walk the line between keeping perspective while assuring people the Brainerd job is not a soft landing?

A: That’s a good question. I’m still very, very competitive. Losing in the section playoffs the past three years still hurts. I want to get back to St. Paul and what a great opportunity to do it where it hasn’t happened yet. At the same time, I want to be a better mentor, a better person, for these kids.