All that's missing from Minnetonka trio's resume is state championship

You won’t get a consensus, but no self-respecting state hockey historian would dare leave the fabled Roseau trio of Neal Broten, Aaron Broten and Bryan “Butsy” Erickson out of the discussion.

Now this debate gets a bit more complicated. In many ways, defensemen are like referees or offensive linemen. The ones who go unnoticed, typically, are doing the best job. Thus, the names of some of the state’s greatest assemblies of defensemen do not roll easily off the tongue.

This season, however, No. 1 ranked Minnetonka boasts a group of blueliners that might just be unmatched in terms of credentials and fanfare. The Skippers have not one, not two but three senior defenseman who have committed to Division I college programs.

While it’s too early to tell where Troy Hesketh (Wisconsin), Justin Holl (Minnesota) and Andrew Prochno (St. Cloud State) and will wind up in Minnesota high school hockey folklore ---- they do, after all, have the bulk of their season ahead of them ---- there’s no question the Skippers feature a rare collection of talent.

Eden Prairie coach Lee Smith knows something about standout defenseman. Last season the Eagles won their first state Class AA title in large part because of Nick Leddy, a rock-steady blueliner who was named Mr. Hockey in March and later selected in the first round of the NHL Draft by the Minnesota Wild.

Smith was well aware of the firepower Minnetonka has stationed at the blue line, even before the Skippers opened their season with stunningly lopsided 6-0 and 9-1 triumphs over Duluth Marshall and Woodbury, respectively. As of Dec. 3, Prochno ranked fourth in the state in scoring with nine points on two goals and seven assists.

“Part of my statement (at the annual fall coaches clinic in Mankato) was if anybody wants to watch the best defensive corps in the state this year, they can drive over to (Minnetonka High’s) Pagel Arena,” said Smith, who has two more standout defensemen himself this season in Dan Molenaar and Kurt Rau.

Minnetonka returns all six of its defensemen from last season’s team that reached the Section 6AA final before losing 4-2 to Eden Prairie. Included in that group is senior Jake Rossman, who plays a stay-at-home style and usually is paired with the 5-foot-11, 180-pound Prochno, whose gear ratio and stickhandling wizardry make him the Porsche of the Skippers’ defensive corps.

Hesketh, in contrast, is Minnetonka’s Humvee. He is 6-3, 185-pounds, punishing in the corners and boasts a wingspan that, seemingly, stretches into infinity.

“In all the years we’ve played together, I don’t think I’ve every seen anyone get around him,” Prochno said about Hesketh, who was selected in the third round of this year’s NHL Entry Draft by the Edmonton Oilers.

Holl is the hybrid of the trio. He has above-average size (6-2, 175 pounds) and skating ability and is equally comfortable on the power play or penalty kill. Holl typically has been paired with Hesketh, giving Minnetonka one of the most physically imposing defensive pairings in the state.

“We feel pretty lucky to have all this talent,” Minnetonka coach Brian Urick said about his Skippers, who also feature Max Gardiner, a senior forward who has committed to play at Minnesota.

“The crazy thing about Minnetonka is, by the time it is all said and done, you are talking about six kids who will play Division I with probably one more that is lurking in there,” Hopkins coach Chad Nyberg said. “That’s a pretty stacked group.”

To put Minnetonka’s talent pool in perspective requires some rewinding. Perhaps no team in recent history had a bigger stockpile of future Division I players than Bloomington Jefferson in the early 1990s when the Jaguars won three straight state titles. Fifteen players from the 1991-92 and 1992-93 seasons moved on to play at a higher level.

Following the Jaguars’ 28-0-0 championship season in 1992-93, defensemen Mike Crowley and Cory Peterson were selected in the NHL Draft. The previous season, Crowley and Peterson were joined on the blueline by yet another future NHL Draft pick in Dan Trebil, who was taken in the sixth round by the New Jersey Devils in 1992.

Hill-Murray’s 1970-71 team featured four future Division I defensemen, including Dave Langevin, who played at UM-Duluth and won four Stanley Cups with the New York Islanders during his 10 seasons in the NHL. Also in the Pioneers’ defensive rotation that season was current Breck coach Les Larson, who went on to play at Notre Dame, Bob Young (Denver) and Dick Spanbauer (Minnesota).

Larson, who guided Breck to the state Class A championship last season, was named all-state as a senior when he was paired with Langevin, a junior.

“Our goal as a pairing was to never give up more than one goal a game,” Larson said.

The Pioneers churned out another standout group of defensemen in the late 1970s and early ’80s that included a superstar duo in Ben Belde, who went on to play at Minnesota, and Bill Schafhauser (Northern Michigan).

Despite the wave upon wave of players Tom Saterdalen (the retired architect of Bloomington Jefferson’s 1990s dynasty) and Terry Skrypek (who oversaw Hill-Murray’s powerhouse teams in the late 70s and early 80s) sent to Division I programs, neither could remember a team that had four players committed to WCHA schools before the start of a season.

Skrypek, who now coaches at St. Thomas University, said that it was rare back then for players to be snatched up by Division I programs before their senior seasons.

“I remember having scouts come to our practice,” he said. “They would show up at 8 a.m. back when we were practicing (at a rink in White Bear Lake). It was colder than heck in that rink, but they were there lined up watching us anyway.”

Notably absent from the overstuffed resumes of Hesketh, Holl and Prochno is a state championship. Even at the youth level this group of Skippers has been unable to get past neighboring rivals such as Eden Prairie and Edina. The Skippers, thanks to their impressive opening weekend, vaulted past Eden Prairie and into the top spot in the state Class AA rankings.

“As a team they really haven’t accomplished anything,” Urick said. “I think they’ve all really developed in the last three years. I don’t think they were this good when they were younger.

“They should get some credit for all the work they have put in during the last few seasons.” 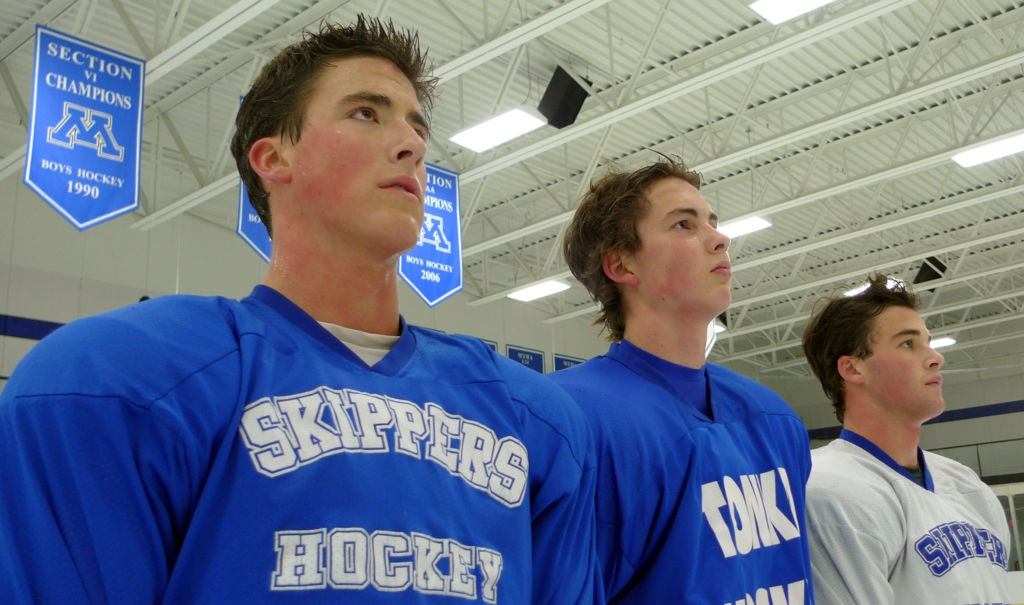