Hopkins one of three boys high school teams to play U.S. women in showdown of the sexes

Hopkins senior Archie Skalbeck has been the subject of an unusual amount of verbal jabs and jousting lately around school.

Hockey season has started, and sure enough the topic of choice centers on one of the Royals’ upcoming games.

“I’m friends with a couple of girls on our hockey team, and we’ve been kind of battling back and forth about this,” Skalbeck, a senior forward, said.

“This” would be the most unusual game ever placed on a Hopkins boys hockey schedule.

On Saturday, Dec. 4, the Royals will be the first of three state high school boys teams to play the U.S. Women’s Olympic team. As part of their run-up to the Winter Olympics starting in mid-February in Vancouver, the U.S. team also is playing Eagan on Dec. 8 and Rochester Century on Jan. 22.

“It’s awesome,” star U.S. forward Natalie Darwitz, a two-time Olympian and a team captain since 2007. “For us, those high school teams are great competition. It’s like playing a game against Canada.

“I’m not a rocket scientist here, but boys are naturally stronger and faster,” Darwitz said. “It is just genetic. They are stronger and can shoot the puck harder. It makes us react a lot faster. I think we get a lot better playing those teams.”

Skalbeck, meanwhile, says he has no idea what to expect. He says he’s never seen the U.S. women’s team or even a college women’s team play, and in the lead up to Saturday’s game he still was fuzzy about the rules (pretty much the same as any state high school boys game, except there is no checking).

This much, however, he did know: “Well, I’m hoping not to lose,” Skalbeck said. “That would not be good.”

Don’t get Skalbeck, the Royals' leading scorer, wrong. He has full respect for a team expected to battle Canada, as always, for the Olympic gold medal. It’s just that life would be a little more … difficult … around school for Skalbeck if the Royals were to lose.

Huge crowds are expected to attend all three games, partially because of the curiosity factor. The U.S. women’s team has only occasionally played boys high school teams. The competition, typically, has been remarkably even.

“I think there is a very good opportunity for them to beat us,” Hopkins coach Chad Nyberg said about the game that will count in the Royals’ overall season record. “They might have a speed advantage with their high end kids.

Hopkins, which enters Saturday's game with a 1-1 record, originally had been scheduled to play Eagan, but a request by Eagan coach Mike Taylor to drop the game was agreed to by Nyberg. Darwitz was a high school phenom at Eagan, and for her to play against her alma mater there first needed to be an opening in an already full 25-game Wildcats’ schedule.

“It will be packed, it will be nuts,” Taylor said about the anticipated atmosphere at the Eagan Ice Arena. “They are doing advance sales right now, and they have sold quite a few tickets. Our arena only holds 1,000 people.”

Taylor, like Nyberg, is expecting a hotly contested game.

“It is going to be an eye opener for our kids to see how skilled they are,” he said. “Right now, we are just hoping to mold our players into a team. They are going to be miles ahead of us in that category.”

The U.S. women’s team has spent the past several months playing a schedule that includes games against college teams, college conference all-star teams and national teams. The U.S. women also recently played a boys junior team based in Alexandria. They also have a showdown at the Xcel Energy Center scheduled for Dec. 30 against Canada.

Darwitz said she gets especially pumped up for games against the boys.

“It’s fun to play them, it challenges us,” she said.

As for the no-bodychecking rule, Darwitz says it typically takes a period for all of that to get sorted out.

“It happens the same way every time,” she said. “They think there is no bodychecking, and the first time we go into the corner we’ll rub them out like we normally would. They will be like, ‘Hey !”

“We’re like, ‘Just because there is no body checking, it’s not like I’m not going to touch you. In the first period its them adjusting to that and it’s us getting their legs and reacting to their speed. First period is a feeling out period and in the second and third, it’s great hockey.” 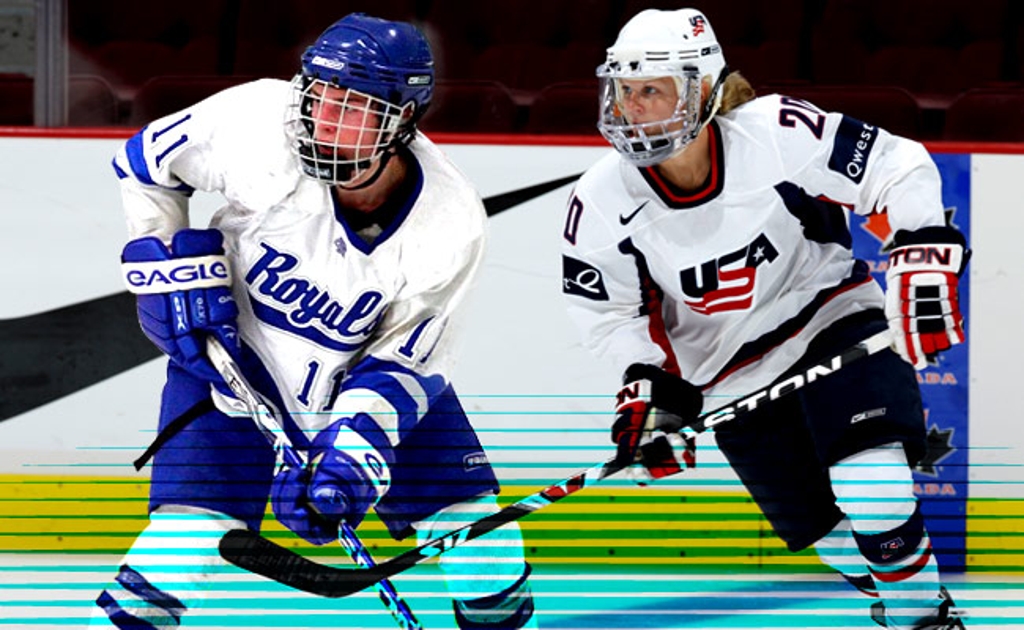