That was a rhetorical question, of course. It doesn’t get any better.

Hockey fans will be treated to that match-up when the No. 2 team in Class A (St. Thomas Academy) travels to the No. 1 team (Breck) for a showdown Tuesday night. The two Twin Cities private school powers will clash in what could very well be a preview of the Class A state championship game in March.

From the East side of the river, St. Thomas Academy hasn’t had a game yet this season, but they must be hungry for this one after falling unexpectedly in the Section 4A finals to Mahtomedi last year.

Defensively, junior Taylor Fleming (2-26-28) was an All-Classic Suburban choice, as well. He will join forces with senior Joe Graveline (4-12-16) and sophomore Eric Schurhamer (3-14-17) to form a roadblock to opposing teams.

Even when they do get through for a shot, opponents will have to contend with senior goalie Kurt Altrichter (13-4-1, .906), yet another All-Classic Suburban choice for the Cadets. Junior Matt McNeely was to split time with Altrichter this season, but chose to play for the U.S. National Team Development Program instead.

From the West side of the river, Breck already has been tested and responded to each with a resounding victory. The Mustangs opened the season with a big 7-1 victory over Mahtomedi and followed it up with an 8-3 rout of Red Wing, two programs expected to be among the best in Class A. Eleven players scpred in the two games, a tribute to the depth of the Mustangs, who return 20 letterwinners from last year’s state championship squad.

Defensively, the Mustangs are sound and have allowed only 17 shots on goal in two games behind players such as seniors Mike Mooney, Ben Gislason (1-2-3), David Crowe (0-2-2) and Joe Zeidler and rugged sophomore Austin Rudnick (2-1-3).

In nets, senior John Russell (2-0-0, 2.00) has started the past three seasons, including a stellar performance in last year’s state title game victory over Warroad. He’s as solid as they come and finishes off a Breck team that appears to have no weaknesses. But if any team can find one, it’s St. Thomas Academy. 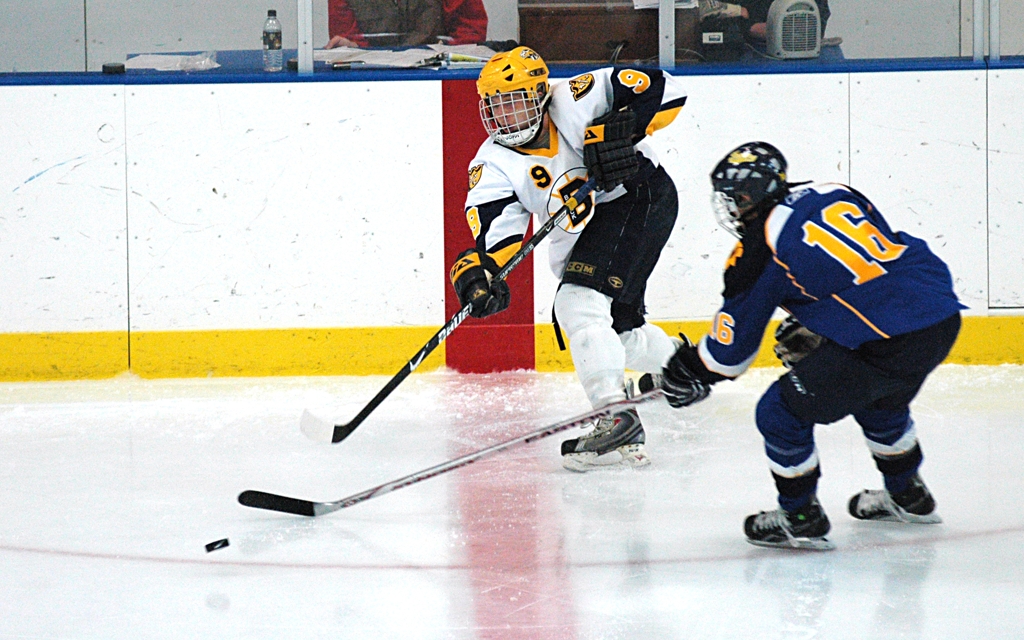