Benilde trio has the finishing touch

Besse, Patterson and Horn give Red Knights one of the state's top lines

What makes a top forward line?

Is it goal-scoring ability;  the power to put the puck in the net at nearly every opportunity? Is it all-around play, from offensive prowess to defensive play that keeps a team on top of the scoreboard night in and night out?

Or is it something more intangible, something that is better seen than spoken?

No matter the criteria, the Benilde-St. Margaret’s “odd couple” top line of freshman Grant Besse, sophomore Christian Horn and senior Brett Patterson is among the best in the state. The trio has helped propel the Red Knights to a terrific start, despite a short time getting used to each other.

After just two weeks of blending as a first line, it’s perhaps a bit of a surprise that the trio is meshing so well. But it certainly has helped the progress of the Red Knights, who are 2-0-1 after three games, including a tough 2-2 tie at Hill-Murray on Dec. 8.

“They’re going to be one of the best lines in the state, and for us to compete with some of the other teams, they’re going to have to be,” said Benilde-St. Margaret’s head coach Ken Pauly, who has seen plenty of high-powered top lines in his years with the Red Knights.

Patterson is the elder statesman of the unit, a senior playmaker who is experienced and can see the ice well. His younger teammates and coaches know the importantce of his presence.

“Patrick may be the most complete forward on our team. He has great skill in the offensive zone and he is very conscientious in the defensive zone. He will be a critical piece if we are to succeed this season,” Pauly said.

Pauly believes the 6-foot-2 Patterson is a Mr. Hockey candidate for his all-around game, although he has competition for attention on his own team with Horn and Besse. Neither is eligible for the award this winter, but both should be candidates down the road.

Patterson was the top scorer on the Red Knights as a junior, scoring 14 goals and 31 assists for 45 points. Horn had 24 goals and 15 assists for 39 points as a freshman, totals that Besse may challenge this winter.

Through three games, Patterson has a team-leading five assists and six points. Horn and Besse each have four goals to lead the Red Knights. They’re young, but have a knack for for finding the net. As a group, the trio complements each other well.

“We’re all good friends and we have good camaraderie,” Horn said.

Patterson believes that puck possession is the key to the line’s success so far this winter. The more they control the puck, the better they’ve been.

“We like to work on moving the puck and being creative,” agreed Besse. “Just scoring goals.”

That hasn’t been an issue thus far.

Virginia/Mountain Iron-Buhl coach Keith Hendrickson has a top unit of his own in junior Garrett Hendrickson and seniors Andrew Judnick and Dan Chesser. He knows what makes a top line a formidable group.

“A top line usually means a dangerous scoring line,” Hendrickson said. “In order to be a scoring threat, the line must have some chemistry, rink rattiness and all three players must have offensive skills.”

Hendrickson stresses puck possession in the offensive zone through supporting teammates, making short passes, protecting the puck with the body and having good hands and instincts. Not only does it help create offensive chances, but it keeps the puck out of the defensive zone.

“And obviously, the ability to finish is also important.” 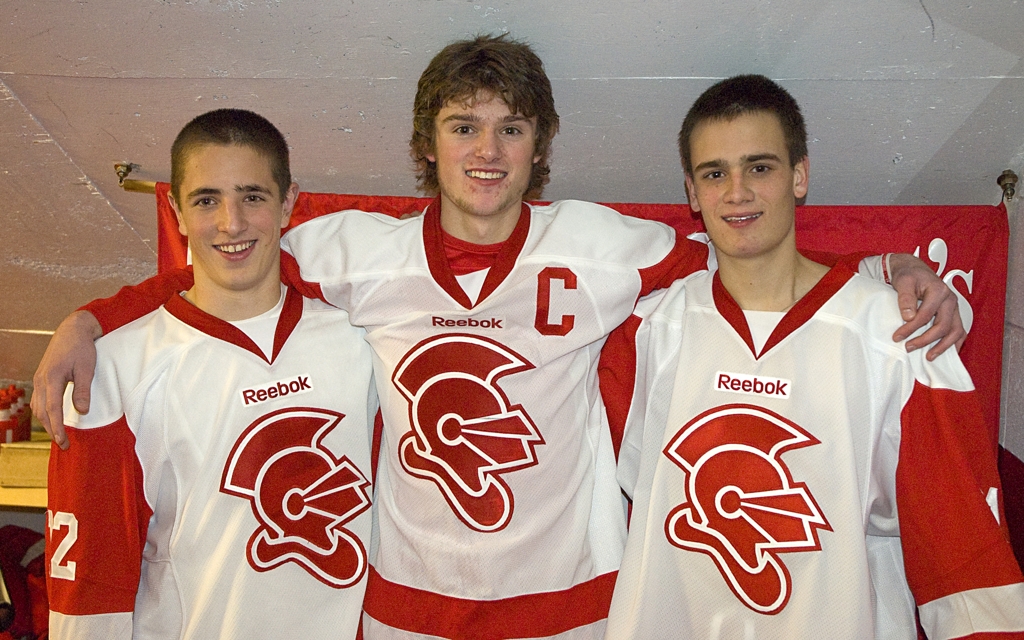