If some hockey fans got their wish and this year’s state tournament switched to a “Sweet 16” format, the St. Thomas Academy at Minnetonka game Saturday night might be the concluding game of such a tournament. As it is, the game is an early-season showdown between the No. 1 team in Class A (St. Thomas Academy) against the No. 1 team in Class AA (Minnetonka).

Officially, not much is on the line other than another regular season victory.

Unofficially, there are plenty of bragging rights at stake. Public versus private. Big school versus small school. East side versus West side. Offense versus defense. It doesn’t get much better.

Minnetonka has started the winter as well as any team could be expected to play, sweeping its first four opponents by a combined 30-1 score. The Skippers are led by four Division I recruits in defensemen Troy Hesketh (Wisconsin), Justin Holl (Minnesota) and Andrew Prochno (St. Cloud State) and big forward Max Gardiner (Minnesota).

Hesketh (2-3-5) was drafted by the NHL’s Edmonton Oilers this past season – just as his coach was about a decade earlier. He’s a 6-foot-2 stay-at-home defenseman who has good hands and a long reach, but prefers to pass the puck up ice rather than rush it. Holl (2-2-4) is also a defense-first player who does have the ability to add offense, but Prochno (4-11-15) takes care of much of that role as a terrific offensive threat from the blue line.

They support senior goaltender Jim Kruger (3-0-0, 0.33), who has started for the past three years for the Skippers.

No team in the state is as talented and experienced in their own zone as Minnetonka. But make no mistake, the Skippers can score, as well. Through four games, they’ve tallied 30 goals, paced by six each from Gardiner (6-9-15) and Thomas Schutt (6-2-8).

St. Thomas Academy also has come out flying this season, beating its first three opponents by a combined 22-10 score. The most impressive victory was the very first, a 4-3 defeat of defending Class A champion Breck in which the Cadets held a 57-26 edge in shots on goal.

St. Thomas Academy doesn’t have a stingy a defense as Minnetonka, but the Cadets are plenty talented along the blue line with junior Taylor Fleming (1-2-3), senior Joe Graveline and sophomore Eric Schurhamer in front of senior goaltender Kurt Altrichter (2-0-0, 3.71), who has also started for the past three years in nets.

The Cadets may have the edge on the forward lines, as they have more than a half dozen top forwards and can place plenty of pressure on opposing defenses. Through the first two weeks, the Cadets roll with a first line of Christian Isackson (6-4-10), Justin Crandall (2-7-9) and Pete Krieger and a second line as potent in A.J. Reid (2-4-6), Zach Schroeder (7-2-9) and Noah Gavin or Matt Kroska (1-5-6). 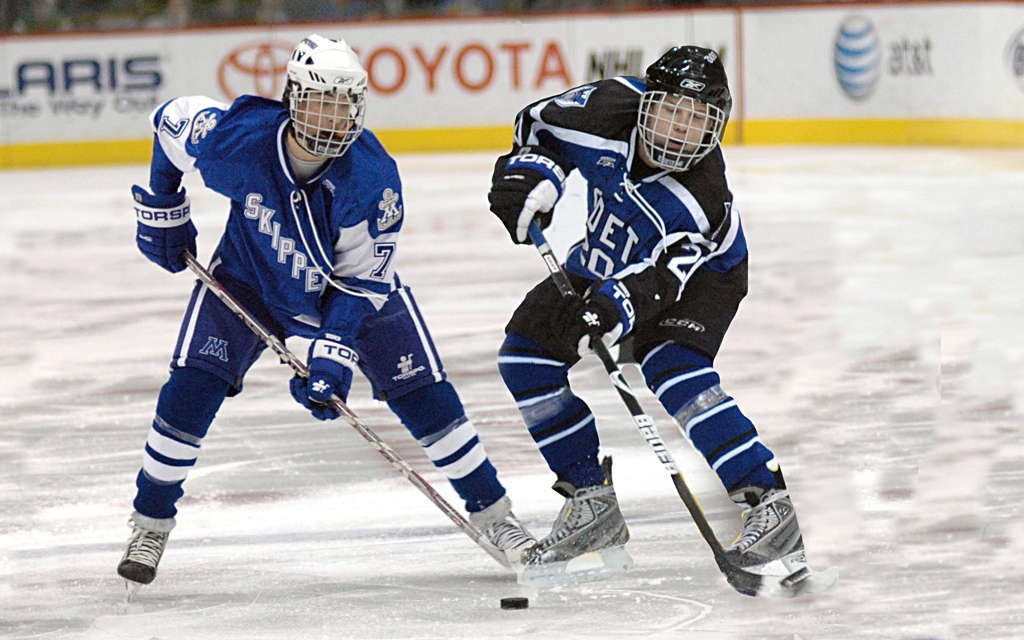