Taylor-made for the Cadets

Q and A with St. Thomas Academy defenseman Taylor Fleming

St. Thomas Academy’s Taylor Fleming has only been playing defense for just over a calendar year, but the 5-foot-10, 180-pound junior has certainly proven to be a quick study.

Before starring for the Cadets on the blue line last winter, Fleming was a high-scoring forward at the Bantam A level, racking up more than 150 points in his freshman season. His scoring prowess continued as a sophomore, despite shifting back to defense, as he was a dangerous offensive weapon for St. Thomas Academy.

Fleming recorded two goals and 26 assists, making him the leading scorer among 1993-born sophomore defensemen in the state. After the season, he was honored with an All-Classic Suburban selection in recognition of his quick transition.

This past off-season, Fleming was also one of six defensemen chosen to represent Minnesota at the USA Hockey Advance 16 National Festival in Rochester, N.Y. He played on the Grey team, which lost a close 4-3 decision to the Blue team, despite allowing just 13 shots on goal in the game. For the tournament, the stout Grey defense limited its opponents to just 95 shots in six games.

Fleming also played in the Upper Midwest Elite League this fall, helping his Team Southeast to both the regular season and tournament titles. He finished as the seventh-leading defensive scorer overall (3-6-9) and was second to teammate Patrick Daly of Benilde-St. Margaret’s among junior blueliners.

Colleges have certainly taken notice of Fleming, as he’s been receiving attention from schools as wide-ranging (and academically challenging for the honors student) as Wisconsin, Harvard, Princeton, Quinnipiac, Nebraska-Omaha, Bemidji State, Yale, Brown and many, many more.

Fleming recently talked with the Breakdown about his training regimen, wrestling prowess and the Cadets’ hunger to return to state after being upset by Mahtomedi in the Section 4A championship game.

Breakdown: Tell me about the outlook for the Cadets this year. Is there any lingering effect from losing to Mahtomedi in the section finals?

Fleming: After winning a state title in 2008, coming into the season last year there were a lot of questions about our team. STA lost a lot of offense and also lost five of our six starting defensemen. Last year’s team had a lot of new players and I think we all did a great job stepping up to the challenge and we even set a lot of school records. Our team won its first ever (Classic Suburban) conference title. We also scored more goals in a single season than any other STA team and we also gave up the fewest amount of goals ever.

This year, we only lost a couple of players. I think we can run two lines that will consistently put up points against the best teams in Minnesota.   We have three of our top four defensemen returning and our starting goalie already has one state title under his belt.   Regardless of the talent we have, once the playoffs hit, the season can end in one game, as all it takes is one hot goalie and your season is over. We found that out last year in the section finals and I don’t want that to happen again.

Breakdown: Give me a short scouting report on yourself as a player. What are your strengths?

Fleming: I think I am a solid two-way defenseman who can rush the puck up ice.  I think I am very reliable in my own zone and I can use my 5-foot-10, 180-pound frame to knock forwards off the puck and/or keep traffic clear around my goal. I think one of my biggest strengths is consistently making that first pass from the defensive zone while under pressure to jumpstart our offense and quarterbacking the power play.

Fleming: Last spring after the high school season ended, I continued to skate and do dry land through FHIT at St. Thomas Academy.

When school was done, I continued skating through the end of June at an over speed clinic run by Minnesota Made in Edina. I also started in June a four-day-a-week dry land program at ARP in Burnsville. I really enjoyed working out besides the pros and Division 1 players this year at ARP.

Once school started, two of my teammates and I continued a three-day-a-week dry land program that was created for us by ARP and we worked out after school at STA. Also this fall I participated in the Upper Midwest Elite League, so I skated on Wednesdays, Saturdays and Sundays, Labor Day through the first weekend in November.

During the high school season, our STA team also does dry land together when practice is over. This year I also will be doing a two-day-a-week workout that ARP has created.

Fleming: I used to be a really good wrestler (state champion) and at one point thought about quitting hockey to focus on wrestling. My older brother is a senior this year (Watertown-Mayer/Mayer Lutheran’s Drew Fleming) and he is going for his third state high school wrestling title and he will be wrestling DI next year (with South Dakota State). I used to be able to beat him, but not any more. He also played hockey, but switched to wrestling after his first year of bantams.

Fleming: I’ve been following Jamie McBain progress since I was a Squirt. I first met him at a camp in Hudson, Wis, that his dad was running as he was a camp counselor/instructor. He broke his ankle that weekend playing basketball. My dad would take me to watch some of Jamie’s games in the summer time when he played with on the Minnesota 88’s with Mueller, Johnson and Carman. I then watched him play at Shattuck-St. Mary's and watched him play in the Bauer tournament. After that, I followed his play over the Internet with the USNDTP 17 and 18 teams. I also watched his play at Wisconsin over the internet and I look forward to seeing him play in the NHL.

I think my style of play is very similar to McBain’s. I’ve spent a lot of time when I was growing up working on my skating and hands skills just like McBain did. In fact, I’m still doing that.

Fleming: I really enjoy playing for Tom and Gregg Vanelli. I learned more about playing defense in my first practice with coach Tom than anyone had ever taught me. My teammates and I are also very close and we do a lot together, even though we live in different communities! 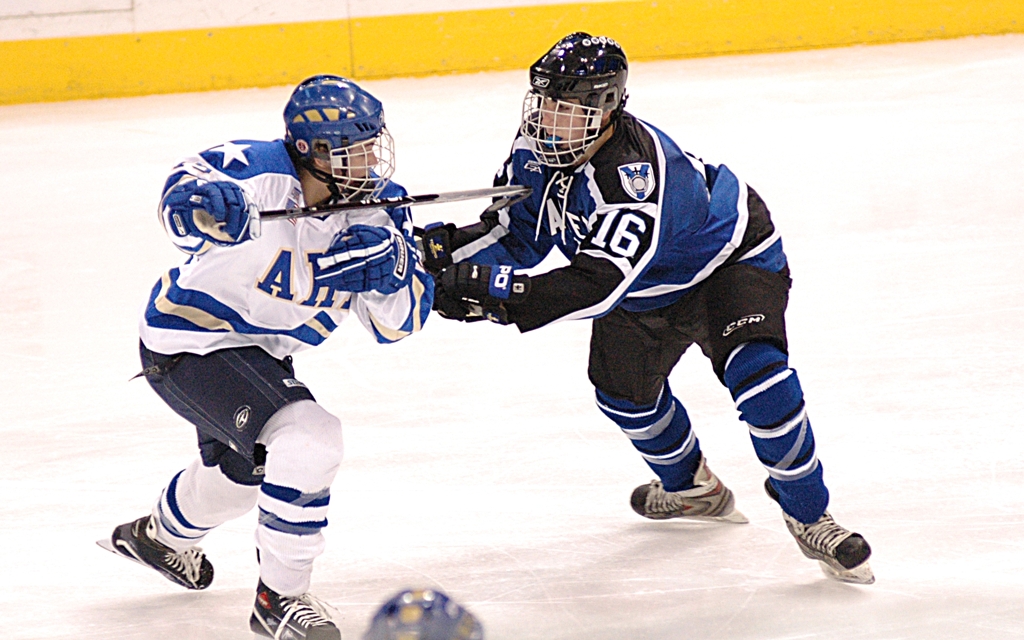