Young and having fun 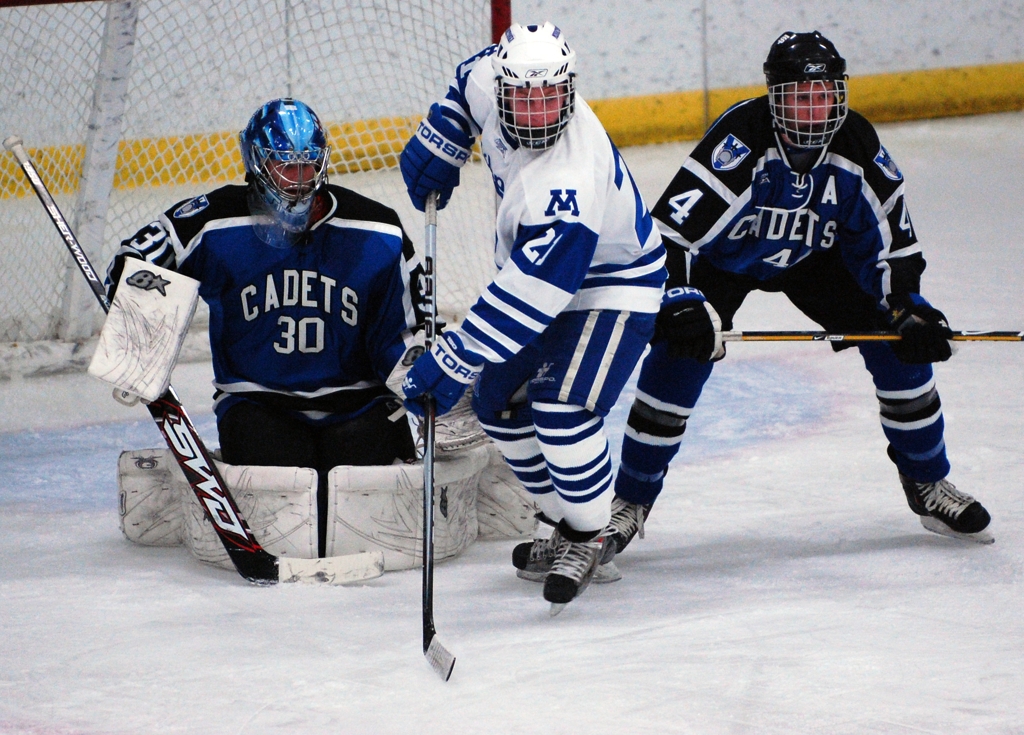 Young and having fun

The ice was teeming with Division I recruits, high school seniors who are headed to some of the nation’s most storied college programs. Those were the players, a half dozen of them locked up by the likes of Minnesota, Wisconsin, Minnesota-Duluth and St. Cloud State, fans jamming a standing-room-only Pagel Ice Arena in Minnetonka came to see.

Then there was Max Coatta.

The only freshman on either the Minnetonka or St. Thomas Academy rosters, the precocious Coatta had the Skippers’ student section going bonkers, chanting his name and, in a fitting grand finale, littering the ice with hats.

Unlikely doesn’t even begin to describe his performance.

Coatta scored three goals, all of them crucial, in the Skippers’ 5-2 triumph over the Cadets in a rare game that matched the state’s No. 1 teams in Class AA and Class A.

“I didn’t know who he was before the game but he was a nice player,” St. Thomas Academy senior Justin Crandall, who has committed to play at UMD, said about Coatta. “He’s quick. Great game for him, not a bad time to get a hat trick.”

After St. Thomas Academy surged to a 2-0 lead after the first period, Coatta, who stands about 5-foot-6 and was one of the smallest players on the ice, scored big-school juggernaut Minnetonka’s all-important first goal on a deflection in front of the net early in the second.

Coatta added what proved to be the winner on a perfectly executed 2-on-1 rush with linemate and Minnesota recruit Max Gardiner less than three minutes into the third period, then put the game all but out of reach when he corralled a loose puck in the slot and calmly rocketed a shot over St. Thomas Academy goaltender Kurt Altrichter’s caching glove to put the Skippers ahead 4-2 with less than 7 minutes remaining.

“He was in the right place, the right spot,” St. Thomas Academy co-head coach Tom Vanelli said about Coatta, who has been skating with Gardiner for about a week and entered the game with one goal in the Skippers’ first five games. “He obviously has a good knack. They wouldn’t have him playing with Max Gardiner there if he didn’t have a good feel for the ice.”

“Luckily we kept it together, they really played good the last two periods,” Urick said.

While a star was being born for the Skippers, St. Thomas Academy was forced to play the final two periods without senior Christian Isackson, a Minnesota recruit who separated his shoulder on a collision early in the second period.

“It’s always tough to lose your best player early in the game, to juggle the lines up and stuff,” Crandall said.

With Isackson out of the game, Vanelli never did find forward combinations that clicked.

“That’s when everything went upside down,” he said. “I guess it’s something good teams adjust to. We thought we had the personnel that could still pull it through, but we just couldn’t get in synch.”

Meanwhile, Coatta seemingly could do no wrong. The brother of former Skippers star Sam Coatta said his strategy for playing with Skippers’ scoring leader Gardiner was to simply pass him the puck.

“He’s a great player, just get him the puck and he’ll put it in the net,” Coatta said.

Instead, it was Gardiner who drew a Cadets’ defenseman and Altrichter to his side of the ice on the 2-on-1 before finally placing a perfect pass to Coatta. 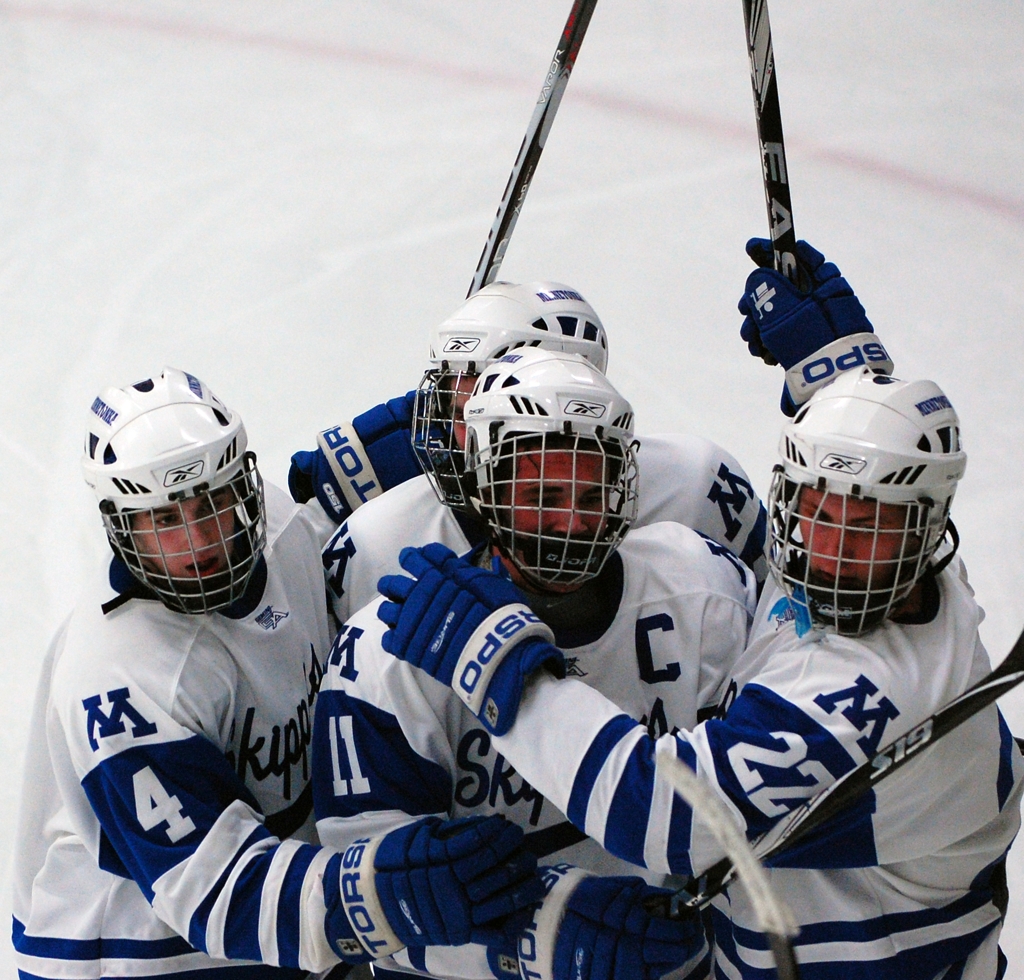 1. Max Coatta, Minnetonka
Who else? Playing in the biggest game of his life, all the Skippers' freshman did was register a hat trick. "That was fun," Coatta said about watching a dozen or more hats litter the ice after his third goal. Fun, indeed.
2. Jim Kruger, Minnetonka
State leader with a .966 save percentage was great when he had to be in the first period when, despite giving up two goals, he kept St. Thomas Academy from running away with the game.
3. Matt Kroska, St. Thomas Academy
Junior forward scored a goal and showcased his outstanding speed all night. Was still backchecking at full throttle late in the third period. 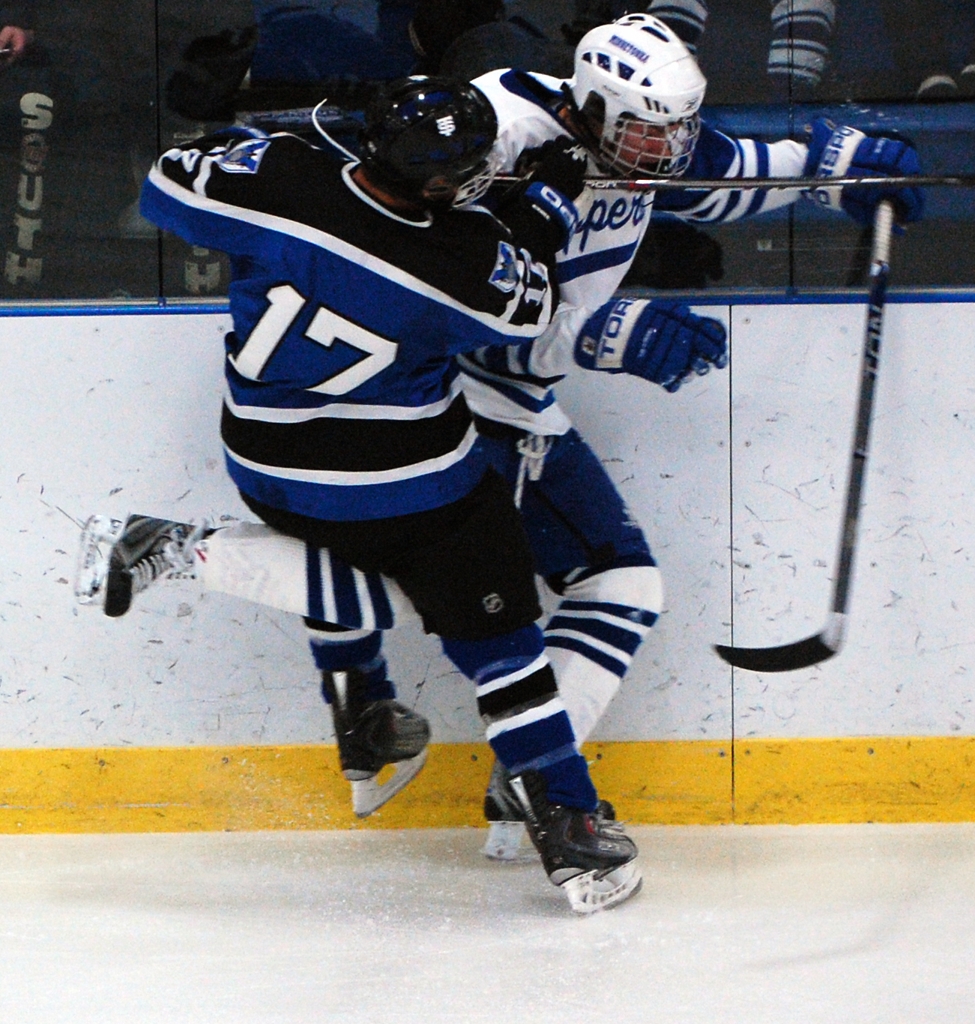 No. 1 vs. No. 1
In a rare matchup in any high school sport, and one that wouldn't have been possible years ago in one-class Minnesota boys hockey, Saturday's game between Minnetonka and St. Thomas Academy featured the state's top-ranked teams in their respective classes. Minnetonka has been the No. 1 Class AA team since the opening week of the season and St. Thomas Academy took over the No. 1 spot in Class A from Breck after beating the Mustangs 4-3 in overtime on Dec. 8.

Fast and furious
The first period started with a bang, with bodies flying all over the ice on the game-opening shift. Nifty St. Thomas Academy sophomore defenseman Eric Shurhamer was drilled hard into the boards at least twice in the opening minute, and the hitting never slowed the rest of the period.

Unexpected thrills
Fans showing up early to Minnetonka High's Pagel Ice Arena were given a bonus for their early arrival. They witnessed a thrilling finish to the junior varsity game between the Skippers and St. Thomas Academy. It went into overtime, with the visiting Cadets winning 3-2.