The Wayzata boy’s hockey team moved to an undefeated 4-0 this week with victories over two high-ranked teams this past week, Centennial and Duluth East.

On Thursday, December 3rd, Wayzata hosted 8th ranked Centennial and sent them home with a 4-2 loss.   The following Saturday Wayzata squeaked out a 4-3 OT victory over top-10 ranked Duluth East in a Heritage Center in Duluth.

Wayzata began the week was 9th and 11th by various AA state rankings.  However, they look to move up in the rankings with these key victories.

“We have had a tough schedule to open the season, as 3 of our first 4 games have been against highly regarded competitors.  I only believe this schedule will make our team that much better as move along into conference play,” said Carl Davis, Wayzata head coach.  “I am looking forward to seeing what this team can do as we move along in the season.  I think we have the talent to really be a contender this year.”

Wayzata jumped out to an early lead with a power play goal by sophomore forward Mario Lucia at 7:44 of the first period (assists: Tony Cameranesi, Seth Barnes).  Defenseman Lucas Whalen sniped a shot past Centennial net minder Brett Larson at near the close of the period (assist: Lucia) to give Wayzata 2-0 lead.

Jared Brunn of Centennial scored the lone goal of the second period on a power play at 12:41 (assist: Riley Colvard).  The teams went to the locker room with Wayzata up 2-1.

Winning teams find a way to get it done, and that’s just what Wayzata did in this classic battle against Duluth East at the Heritage Center in Duluth.

Wayzata took the lead at 4:14 of the second period with an unassisted goal by senior Scott Holm.  And while Duluth East out shot Wayzata 14 – 9 during the second period, goaltender Alex Clayton shut down several Duluth East scoring chances and the period ended with Wayzata ahead 2-1.

Duluth East came roaring back in the third period with two goals in eight seconds.  Randolph scored his second of the game at 3:48 (assists: Phil Johnson, Mellin) followed by Nolan Meyer (assist: Luke Renier).  Wayzata struggled through the period, being outshot 15-8, until Lucia set-up a break-away with a perfect half-rink pass to junior Tyler Klein as he exited the penalty box at 13:27 of the 3rd period.  The game ended in a 3-3 tie.

Overtime play was more even, with shots at 3 apiece.  After killing a penalty, Wayzata defenseman Death’s blast from the point at 4:53 sent the Trojans home with a victory (assists: Cameransi, DJ Jones).

Clayton made 37 saves for the Trojans. 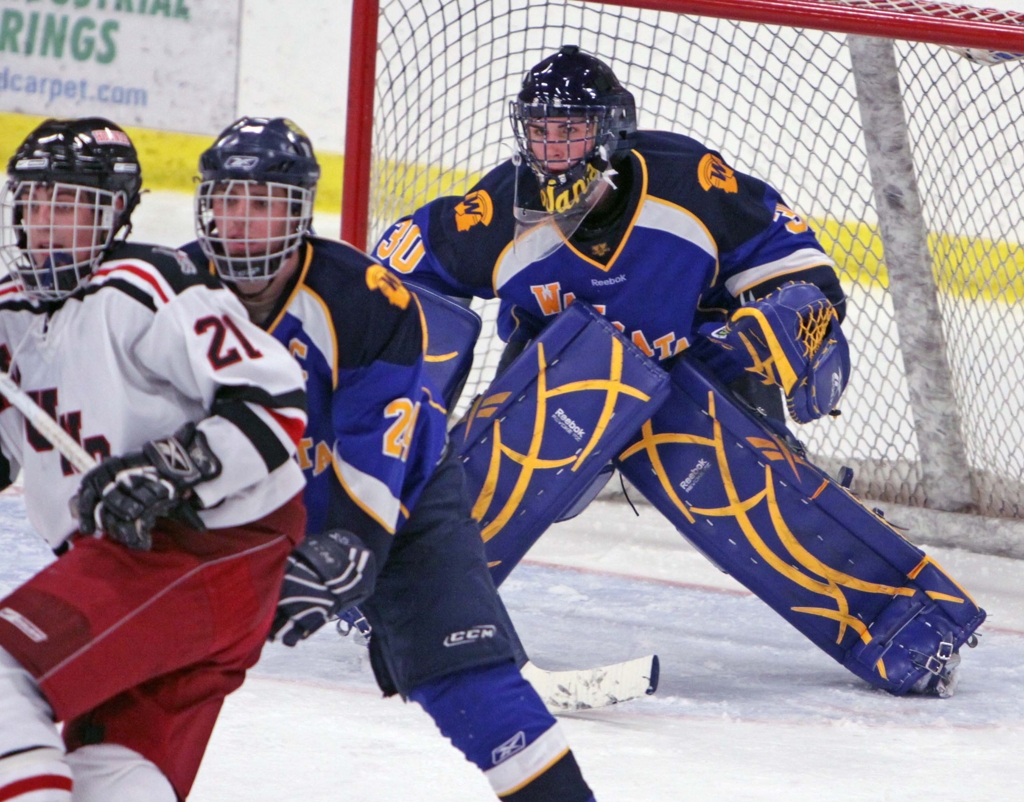