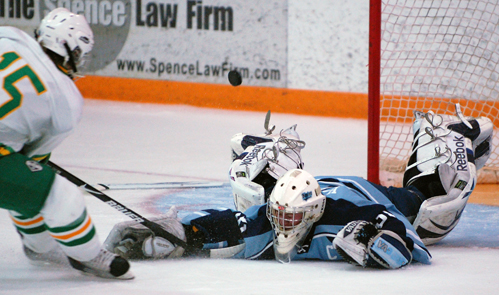 Blaine goaltender Danny Harper dove at Edina's Blake Chapman in an attempt to stop the puck. Photo by Helen Nelson

An Edina team without superstars is an aberration, like a downtown street corner without a Starbucks or a pizza without cheese.

Take a closer look at these Hornets and how they are winning, though, and you might just start checking to see if the sun is now rising in the west.

Edina is 8-1 and ranked No. 7 in Class AA -- and climbing fast. That’s no big surprise for one of the state’s traditionally dominant programs. The oddity here is that there’s not a single player approaching the stature of, say, Blaine’s Nick Bjugstad, in the bunch.

Speaking of Blaine, Bjugstad and the No. 3-ranked Bengals were at Braemar Arena on Saturday, Dec. 26. They got the full dose of Edina’s grunt-and-grind game and came out on the losing end of a 1-0 final.

If there is a standout among these Hornets, it’s probably junior Max Everson, a defenseman who is being recruited by several Division I colleges. Everson didn’t play Saturday against Blaine because of shoulder and wrist injuries he suffered in a Dec. 19 win over Eden Prairie.

No matter. The Hornets' signature this season is depth. They played five defensemen and four lines against the Bengals, and there wasn’t a noticeable drop-off in talent when any group was on the ice.

“We don’t have many thoroughbreds,” Edina coach Curt Giles said. “We have a bunch of ponies, you know. It’s a totally different team than what we had last year.”

Last season Edina featured the likes of Anders Lee and Marshall Everson at forward and Brendan Baker on defense. Another senior superstar, Zach Budish, missed the season because of a knee injury he sustained while playing football.

This season, well, you have players such as Jon Cote. A hard-charging forward who isn’t afraid to muck it up in the corners – he took two penalties while banging away at Blaine defensemen – Cote also scored the game’s lone goal on a power play midway through the third period.

After taking a perfect feed through the crease from Jesse Norling, Cote one-timed a shot that bounced through Blaine goaltender Danny Harper’s legs.

“I was lucky it went in,” Cote said. “It hit off his pads and somehow slid right through his legs. I was just trying to get something on net, I’m not going to lie to you.”

Bjugstad, meanwhile, was hounded and harassed all night. Ben Ostlie and Jake Heck were Edina’s starting defensemen, but senior captain David Jarrett and freshman Parker Reno also were effective in limiting the Minnesota recruit’s scoring chances. An expected first-round NHL draft pick in June, Bjugstad had more broken sticks (three) and penalties (one, for cross checking) than he had goals.

“I thought, overall, our scoring chances were great,” Blaine coach Dave Aus said. “I thought their goalie had a great game.”

Ankeny made 24 saves and allowed few second-chance shots for the Bengals. He said one of the big benefits of giving so many players regular shifts is the chemistry it builds.

“It’s a lot of fun playing everybody,” Ankeny said. “There’s good team camaraderie that way. No one is looked down upon or looked up at.

“Everyone just does their job.” 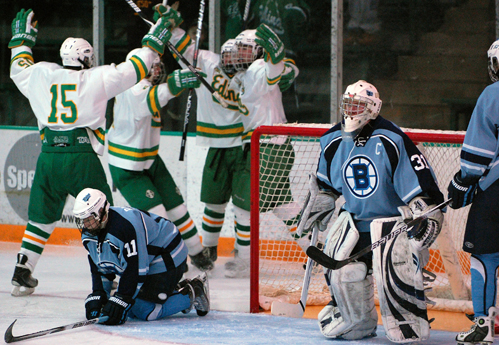 2. Johnny Ankeny, Edina
Senior goaltender wasn't tested often after the mid-point of the game, but he made a fabulous glove stop on Tony Larson early in the second period when the score was 0-0.

3. Danny Harper, Blaine
Senior goaltender made 36 saves, including 26 in the final two periods. He allowed few second-chance shots and had no chance on the lone Edina goal -- a pretty back-door power-play setup -- and still got a piece of the puck with his skate. 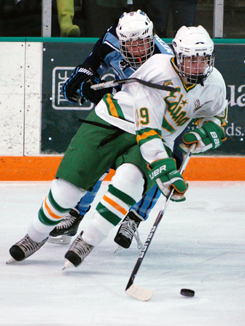 Forward Steven Fogarty of Edina skates with the puck while getting hooked by Blaine defenseman Mike Cameron. Photo by Helen Nelson

Getting a little help
One of the best scoring chances through two scoreless periods came early in the second when Blaine's Tony Larson ripped a close-range shot that was ticketed for the upper right corner of the net. Edina goaltender Johnny Ankeny got a piece of the puck with his catching glove, pushing it just wide enough for it to hit the post and ricochet into the corner.

Goaltenders rule
Edina's Ankeny and Blaine's Danny Harper each made 10 saves in a scoreless but entertaining first period that saw each team fail to capitalize on a handful of good scoring chances. Edina had a slight territorial advantage in the second period, when it had 13 shots compared to Blaine's 10.

Injury report
Edina played against Blaine without top defenseman Max Everson, a junior who is being recruited by several Division I colleges. Everson suffered serious shoulder and wrist injuries Dec. 19 against Eden Prairie and will be out of the Hornets' lineup an estimated four to six weeks.

Fab freshman
Edina's Lou Nanne, grandson of Minnesota hockey icon Lou Nanne, is the only freshman on the Hornets' junior varsity roster. The forward scored two goals against the Bengals in Edina's 4-3 victory. The elder Nanne played for the Gophers, North Stars and was the North Stars' general manager for a decade

Amazing stat
Entering its game against Blaine, Edina had allowed just one goal in 42 power-play tries for their opponents. Do that math, and that's an almost unheard of 97.62 percent success rate for the Hornets' penalty killers.

Strength vs. strength
Blaine's top-end talent is as good as anyone's in the state, and evidence of that can be found on a Bengals' power play that had been converting at a healthy 33.36 percent rate.