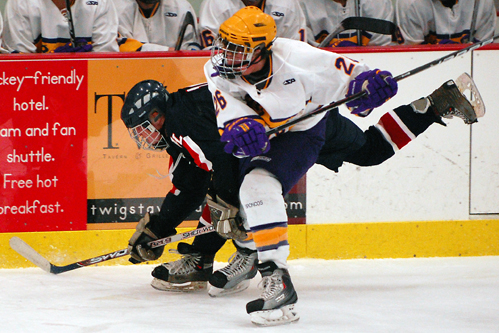 Two days and a 366-mile, seven-hour bus trip later, the bruised and battered Broncos were at it again, this time facing an altogether different border foe.

“They’re the northernmost team in the state and we’re the southernmost,” Albert Lea coach Roy Nystrom, an Eveleth native, said about the Monday, Dec. 28, matchup in Rochester against the Broncos. “I love playing the northern teams.”

Most of the time, yes. This time? Well, Nystrom, one of the state’s all-time winningest coaches, didn’t particularly enjoy this lopsided north-south showdown.

“We didn’t give them much opposition today,” Nystrom said. “We tried to play physical with them, but I think we were bouncing off of them more than anything else.”

International Falls, two-time defending champion of the eight-team Class A portion of the Kiwanis/Wells Fargo Festival, took an emphatic first step toward a third-straight title with their 6-1 quarterfinal thumping of the Tigers.

The Broncos’ dominated play at both ends of the rink despite playing without star defenseman Matt Youso, who suffered a deep thigh bruise in a wild 4-3 come-from-behind victory over arch-rival Fort Frances, Ontario, on Saturday, Dec. 26.

With Youso out of the lineup (he didn’t even make trip), International Falls coach John Prettyman gave Willie Corrin, the Broncos’ other standout senior defenseman, the go-ahead to manage his own ice time.

“Maybe that wasn’t such a good idea,” Prettyman said with a laugh. “The only time we could get him off the ice was to drag him off.”

Corrin, who was a standout in the Upper Midwest High School Elite League this fall, set up two goals, one of which came on a nicely executed shot-and-deflection play with fellow senior Jordan Christianson. Corrin also scored a goal himself, firing home the Broncos’ sixth goal on a nifty upper-shelf shot from the crease after waiting patiently for Tigers’ starting goaltender John Wrolson to drop to the ice.

“Usually (Youso) and I switch off every other shift,” Corrin said. “But I had to cover his shift today, so I got a lot of ice time.”

The Broncos advance to the semifinals on Tuesday against Rochester Lourdes, which beat Dodge County 6-0 in the other lower-bracket quarterfinal. No doubt the endurance of Corrin and Christianson, who also logged a lot of ice time thanks to a parade of third-period penalties for both teams, and the rest of International Falls’ first-line players will be tested.

“I think I can do it (two more days),” Corrin said. “I just need to go get something good to eat and maybe take a bath or something to get my legs nice and warmed up.” 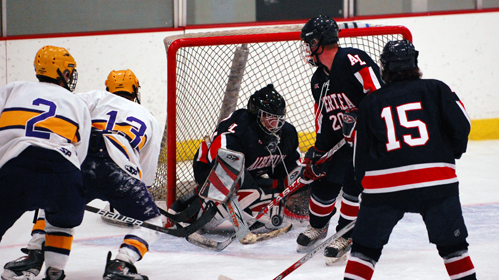 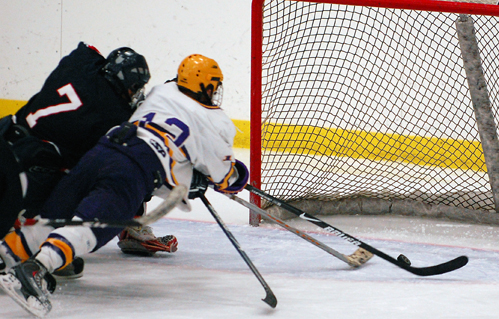 2. Jordan Christianson, Int'l. Falls
Diminutive senior had two goals and two assists, showing he is equally adept as a playmaker and play-finisher. Also played a high-energy, physical style that made him a pest to Albert Lea's defenseman.

3. Glen Walls, Int'l. Falls
Is there a rule that says at least one goaltender must appear in the three stars? If so, we're not going to break it. Walls didn't see a lot of rubber (he faced just 17 shots) but he made all the tough saves look easy and didn't surrender many rebounds. 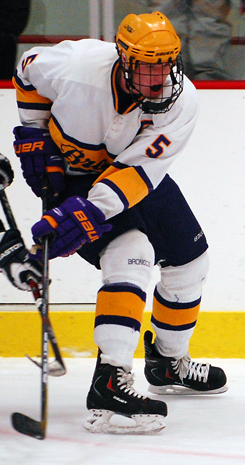 Quick recovery
Just when it looked like Albert Lea was going to climb back into the game, scoring a goal midway through the second period to pull within 4-1, International Falls scored twice more to end the second period. After the sixth goal Albert Lea coach Roy Nystrom pulled starter John Wrolson with 3:03 left, sending out Harry Gjersvik as the replacement.

Long ride south from the border
International Falls departed for Rochester at 7 a.m. Monday on a charter bus that arrived at about 2 p.m. Also on the bus was the Broncos' girls team, which also is playing in a tournament in Rochester.

Iron man
With fellow senior standout defenseman Matt Youso sidelined with an injury, Willie Corrin was on the ice for all but a few minutes of the first period against Albert Lea. Corrin played in the Upper Midwest High School Elite League in the fall and was on the championship-winning Minnesota Red team that won the league's season-ending tournament.