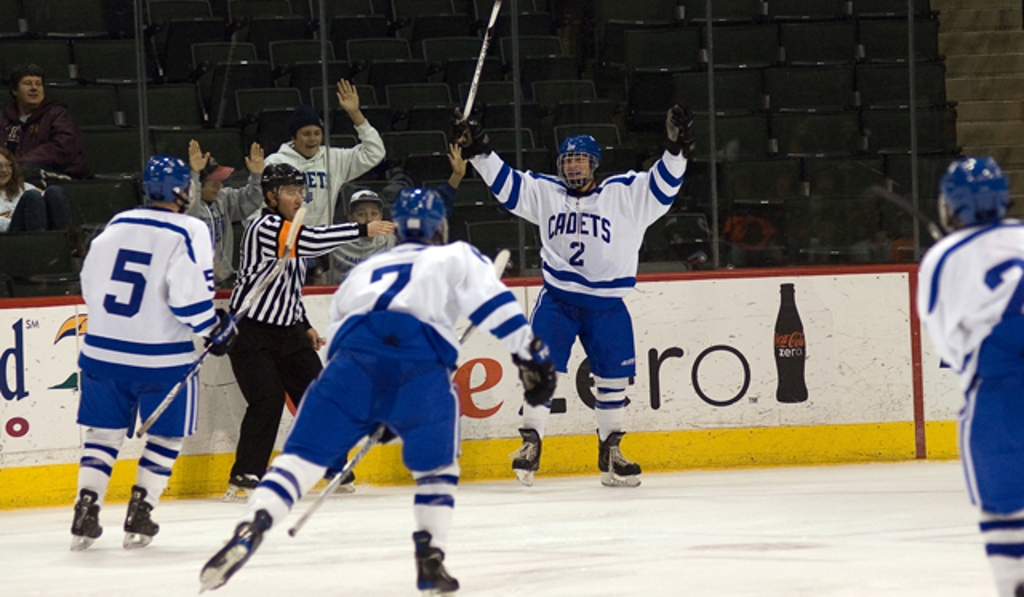 A late Christmas present for hockey fans is now official.

With a resounding 7-0 victory over White Bear Lake in the quarterfinals of the Schwan Cup Gold tournament Monday afternoon at the Xcel Energy Center in St. Paul, St. Thomas Academy set itself up for an eagerly anticipated rematch with Minnetonka in the semifinals Tuesday night.

The state’s two top-ranked teams (Minnetonka in Class AA, St. Thomas Academy in Class A) met less than two weeks ago with the Skippers overcoming a 2-0 first-period deficit to win 5-2. Cadets’ star forward Christian Isackson was hurt during that game, which may have shaken up the team as well.

“Christian got hurt and things got jumbled up and confused,” admitted goaltender Kurt Altrichter. “One player shouldn’t make a difference, but we needed to learn how to bounce back. It kind of got in our heads a little bit.”

“Because it happened during the game, it was a little more difficult for guys to prepare for it,” St. Thomas Academy coach Greg Vanelli said.

Isackson returned to action Monday and looked to be back near full-strength -- and his teammates certainly picked him up. Sophomore Peter Krieger broke a scoreless deadlock with just 4.7 seconds left in the first period, a goal that broke open the floodgates.

St. Thomas Academy scored twice more in the second on goals from Isackson and Krieger and then poured it on with four more in the third period. Krieger finished with two goals and an assist, senior Justin Crandall had a goal and three assists and Matt Kroska added a goal and an assist for the Cadets.

At that point, the only suspense was whether Altrichter and his defense would finish off the shutout. They did, with Altrichter stopping all 22 Bears’ shots he faced.

“It’s a good confidence builder,” Vanelli said. “You have to have good goaltending to have a good year and he’s the one guy we’re counting on.”

The senior goaltender posted a shutout against his former teammates (Altrichter played in the White Bear Lake youth system) by stopping all 22 shots he faced.

Crandall factored in the first four Cadets' goals, recording first assists on the first three and notching a goal to start the third period that made the score 4-0.

Krieger, a sophomore forward, was also in on the early scoring for St. Thomas Academy, scoring the first and third goals and assisting on Crandall's third-period tally.