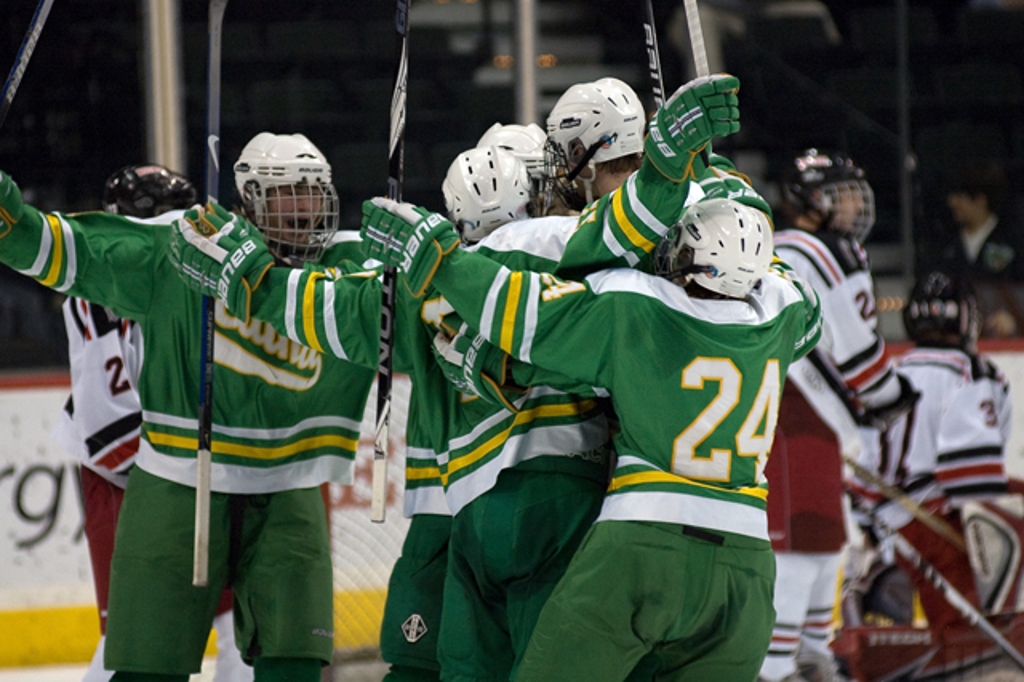 As Edina entered the locker room following a 3-0 victory over Duluth East in the Schwan Cup Gold quarterfinals Monday night at the Xcel Energy Center, the Hornets could be heard shouting, “That’s how we win – as a team!”

Edina, last year’s favorites to win a state title behind a very potent senior class, fell shy of that goal in heartbreaking fashion.  Many observers felt the Hornets would have some rebuilding to do this winter, but after a loss to Wazyata on the season’s first weekend, Edina has rattled off eight straight victories while allowing just seven goals.  They’ve done so without star power.

“When you follow in the wake of a group that went through here last year is that sometimes you go unnoticed,” Edina coach Curt Giles said.  “They’re fine with that, but I think they’re good hockey players.  I think they’re a good team and all they want to do is play hockey.”

Duluth East proved to be a pesky opponent through two periods Monday night, keeping the Hornets out of the net despite a big shot advantage.  Greyhounds goaltender Jo Jo Jennetta made some terrific saves to keep the game scoreless and was helped by a young, but rugged East defense.  Duluth East lost its down star-powered defensive unit from last season and has been adjusting to their departure.

Michael Sit finally broke the scoreless tie at 6:37 of the third period, rifling in a shot from the faceoff circle from his knees. Marcus Jones chased the rebound of his own long shot into the left corner and fed the puck into the slot to a streaking Brett Stolpestad, who put it away for an insurance goal at 11:37.  Stolpestad capped the game with an empty-netter with eight seconds remaining.

East pressured Edina goaltender Johnny Ankeny over the final 10 minutes, but were unable to crack his shutout bid.  Ankeny finished with 21 saves, while Jennetta had 32 stops.

Despite two straight shutouts over ranked teams, Giles hasn’t been happy with his team’s effort since the holidays.

“We sat back a little bit and watched,” Giles admitted.  “We didn’t get involved early enough and I really don’t think we played very well.”

He’s looking for a much better showing Tuesday night in the semifinals against Blaine, a team the Hornets beat 1-0 just three days ago to start the shutout streak.

Editor's note: The story was modified Dec. 30, 2009 due to changes to the official scoring.  Michael Sit was credited with the first goal and Brett Stolpestad the second.

Taft, a senior forward for Edina, broke a scoreless game with a goal 6:37 into the third period.  He's the most well-known of the Hornets and has been ranked by the NHL Central Scouting Bureau.

It was a second straight shutout over a ranked team for Edina's Ankeny, who made 21 saves on 21 shots.  He was tested most over the final 10 minutes of the game as East had several terrific scoring chances.

East's junior goaltender kept the Hornets at bay for the first 40 minutes of the game, despite a big shots advantage.  He finished with 30 saves on 32 shots.