Edina beats Blaine again thanks to another clutch goal; Minnetonka up next 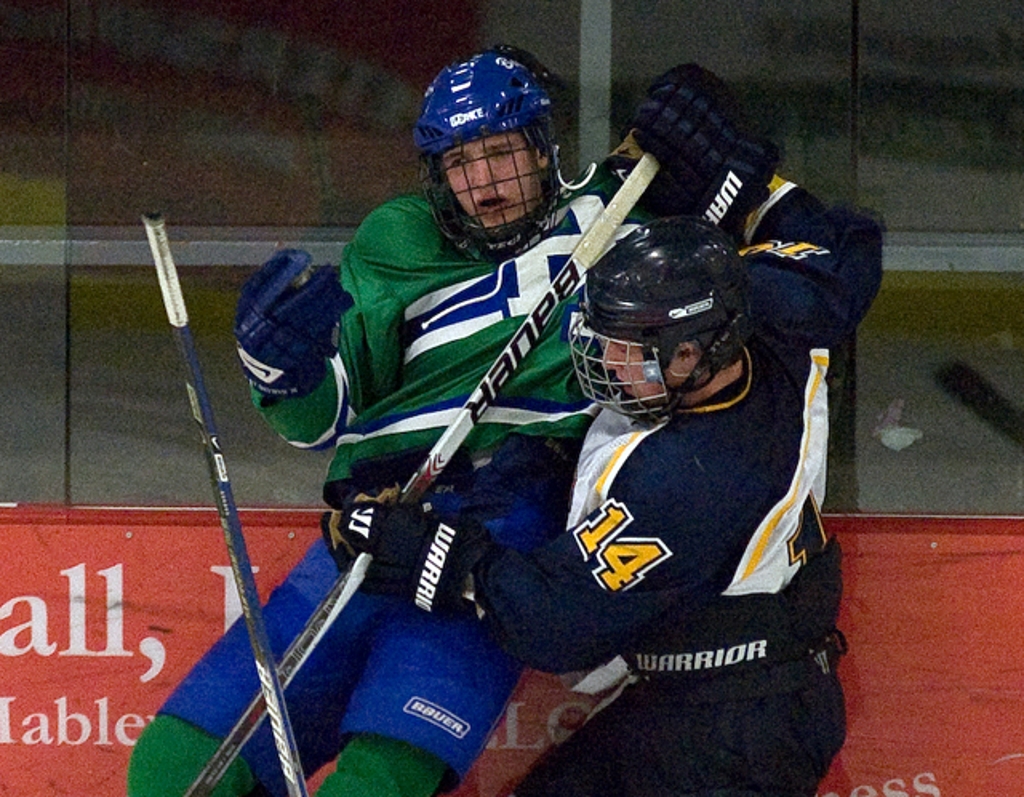 With all the build-up surrounding Breck and St. Thomas Academy in Class A this winter – and their possible rematch at state -- two other teams who will definitely have a say in the matter got together in the Schwan Cup Silver semifinals Tuesday night at the Roseville Arena.

Mahtomedi claimed a 3-2 overtime victory over Blake when Charlie Adams ripped in a powerplay goal 2:39 into the extra session.

“We kept pounding and we finally got an opportunity there at the end,” Mahtomedi coach Jeff Poeschl said.

The Zephyrs, who upset St. Thomas Academy in last year’s Section 4A finals, could again be a roadblock to the Cadets’ state bid. Meanwhile, Blake is a perennial contender with Breck for the Section 2A title. Before the Mustangs’ state title last year, the Bears had been to the previous three state tournaments.

For now, the Zephyrs will be content with a Silver division championship showdown with Breck on New Year’s Day at the Xcel Energy Center. The two teams played in the season opener way back on Dec. 1, with Breck earning a 7-1 victory.

“I don’t know that we can match their depth, but we need to hold strong and keep them off the board,” admitted Poeschl, whose team played that first game without superstar defenseman Ben Marshall.

Tuesday night, it was apparent how much Marshall means to the Zephyrs’ offense. The junior tallied assists on both the second and third goals. First, he set up Brandon Zurn for a short-handed breakaway goal that gave Mahtomedi a 2-1 lead early in the third. Then he found Adams at the goal line for the game-winner on the powerplay in overtime. Numerous times, Marshall rushed the puck end-to-end to create scoring chances for the Zephyrs.

“He controls the play out there,” Breck coach Les Larson said. “He’s a Michael Jordan-type. He’s really a point guard out there.”

Blake took a 1-0 lead at the 11:26 mark of the first period, as George Ordway connected on a power play goal from E.J. Faust and Ryan Bullock. Mahtomedi’s Mike Rose scored the only goal of the second period to tie it at 1-all.

After Zurn gave Mahtomedi a 2-1 lead in the third, Blake’s Kolten Fischer tied it up less than two minutes later to send the game to overtime.

Goaltender saves were not available after the game. Sawyer Marshall started in nets for Mahtomedi, while Ryan Hayes was in for Blake.

Scoring the game-winner in overtime gets plenty of attention, and Adams was the top star with his power play goal 2:39 into the extra session.  He also added an assist for Mahtomedi.

Marshall, Mahtomedi's junior defenseman who is headed to the University of Minnesota, showed off his skills in rushing the puck.  He assisted on two goals, including the game-winner.

Hayes, a Blake junior goaltender, was tagged with the loss but certainly not because of his play in nets.  He stopped numerous tough Zephyrs' chances and helped send the game to overtime.