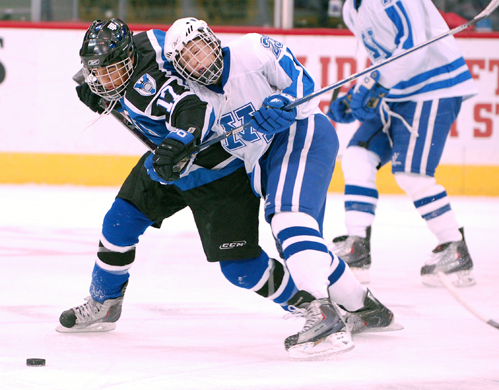 Victory, and a loss

The collision along the boards seemed harmless enough.

Turns out the second-period pileup was anything but routine.

Minnetonka’s Max Gardiner, the top scorer on the state’s top team, was down on the ice and he wasn’t getting up. A trainer was called out onto the rink.

Although Gardiner eventually was able to leave ice without assistance, he did not return to the game.

From there, the news for the Skippers kept getting worse. Minnetonka beat St. Thomas Academy 5-2 in the Schwan Cup Gold Division semifinals on Tuesday, Dec. 29 at the Xcel Energy Center, but the final outcome between the state’s top-ranked teams in Class AA and Class A was merely a footnote to Gardiner’s injury.

“Obviously it’s a tough break,” Minnetonka coach Brian Urick said about what is believed to be a broken wrist that could keep Gardiner out of action for as many as six weeks. “You’ve got one of the best forwards in the state out of the lineup.”

At 6-foot-2, 175 pounds, Gardiner has the size to go along with a full set of offensive skills. That package has made the senior Minnesota recruit a likely first-round NHL draft choice. For the 9-0-0 Skippers, and for now, he merely has team highs of 11 goals and 18 assists.

Gardiner, who opened the scoring against St. Thomas Academy just 59 seconds into the game, also had served as the main setup man to freshman scoring sensation Max Coattta, who has nine goals in his last four games, including one in the win over the Cadets (5-2-0).

“At first you are just hoping it is something minor, that maybe it just hurts for that moment,” Minnetonka defenseman Andrew Prochno said about Gardiner’s injury. “When we found out it was broken, we figured we have to put it behind us for this game. We were up 3-1 at that point, and we just wanted to play good defense, get it in deep and keep battling. We figured after the game we can worry about how he is doing, is it broken, is it not, stuff like that.”

“They are the fastest team we’ve faced this year, probably,” Prochno said. “They don’t give up. They keep fighting.”

As for Gardiner, Urick said he was taken to have X-rays on his wrist.

“It sounds like we’re going to be without him for an extensive period of time,” he said. “But we told the kids after the game we don’t need one guy to replace Max. Everybody is just going to have to pick their game up a little bit more and try to do it by committee. You don’t replace a player like that."

1. Derek Frawley, Minnetonka
Junior forward used a bit of trickery on his second-period power-play goal, faking a pass from behind the net then stuffing the puck in the side of the goal. He also had two assists, keeping the Skippers' offense in high gear despite the loss of leading scorer and linemate Max Gardiner to a wrist injury.

2. Max Coatta, Minnetonka
Freshman forward scored yet another goal, giving him nine in four games. He also had two assists, one of which was a perfect feed that set up a goal by Gardiner less than a minute into the game. Yes, this kid is for real.

3. Christian Isackson, St. Thomas Academy
Senior forward missed most of the Cadets' first loss to Minnetonka with a shoulder injury and seemed intent on getting a full game's worth of action and then some. He set up Eric Schurhamer's power-play goal in the second period with a pretty cross-ice pass.

Where is everybody?
When St. Thomas Academy and Minnetonka squared off on Dec. 19 in Minnetonka the teams played in front of a packed Pagel Ice Center crowd. The venue may have been larger for the rematch on Tuesday night, but the crowd most certainly was not. At least that's the way it looked and felt at the cavernous Xcel Energy Center in St. Paul, where there was a surprisingly sparse turnout for one of the season's biggest games to date.

Still unbeaten
With top-ranked Class AA teams such as Hill-Murray, Wayzata and Cretin-Derham Hall all losing during holiday tournament action, Minnetonka's unbeaten record looks that much more impressive. "If you play a tough team the night before, and you have another tough team the next day, it can wear and tear on your body," Minnetonka senior defenseman Andrew Prochno said. "Whoever is more fresh, whoever has more energy, will probably win that game."