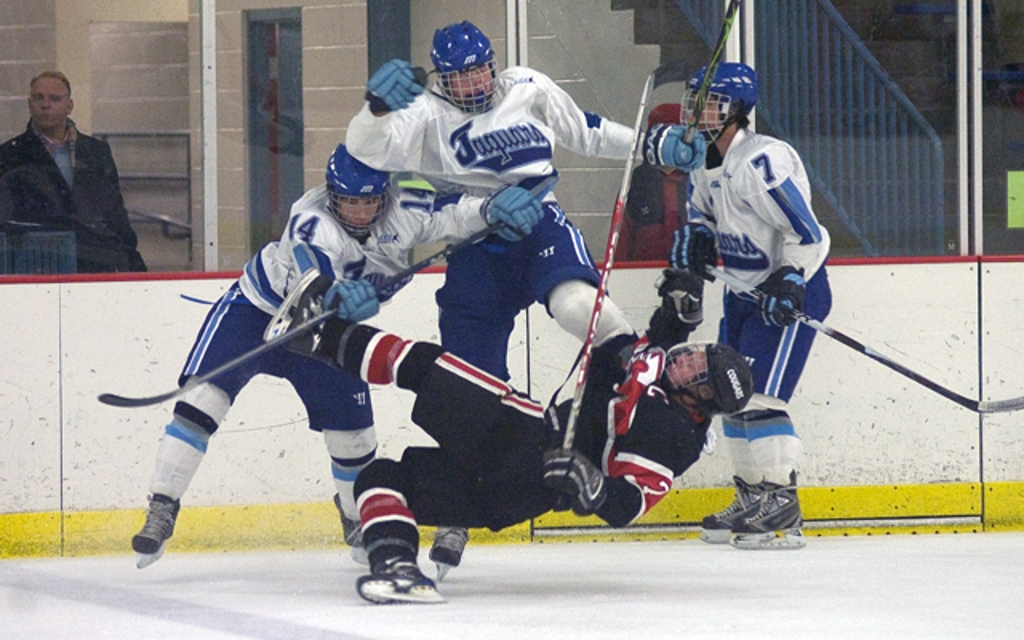 Centennial sophomore goaltender Don Zalezny began Wednesday in front of a few dozen fans at the Cougars’ junior varsity game. He ended it five periods, one overtime and three shootout rounds later as the hero of the Centennial varsity’s 3-2 upset victory over No. 2 Bloomington Jefferson in the finals of the St. Louis Park Holiday Tournament.

“I was just excited to play,” downplayed Zalezny, who only received word he was starting the varsity game after playing the first two periods of the JV tilt. “I wasn’t expecting to come here, but coach came and told me I was going in for varsity. I was pretty pumped for that and just tried to get ready to go.

Through regulation and overtime, Zalezny stopped 34 of 36 shots, and then stymied both shootout attempts he faced. Brett Stern had given Centennial a 1-0 edge in the shootout and when Riley Colvard stuffed in his attempt in the third round, the Cougars rushed the ice in celebration.

Officially, the game will go down as a tie, but to the Cougars, it tasted like victory.

Zalezny saw his first varsity action back on Dec. 5 in a 9-2 loss to Jefferson. He relieved starter Brett Larsen after the first period with the Jaguars already up 6-1. With Larsen hurting after a semifinal victory Tuesday night against Benilde-St. Margaret’s, Zalezny got the call again – and made the most of it.

Centennial, whom many observers had ranked in the top-10 at the season’s start before two straight losses, capped off an impressive tournament run. On three straight days, the Cougars beat Woodbury, No. 8 Benilde-St. Margaret’s and No. 2 Jefferson.

“We’re a blue collar team,” Aus said. “We have to be. And we weren’t at the beginning of the year.”

“Last time, that wasn’t the true Centennial,” Jefferson coach Jeff Lindquist said. “I knew they were a lot better than that. Tonight was more the team I expected from them.”

As in their first match-up, it appeared early as if Jefferson might run away again. With Colvard in the penalty box, the Jaguars power play went to work, with Joe Faust scoring on a screened shot from the point just 1:08 into the game.

But the Cougars held. Physical play picked up in the second period, to the advantage of Centennial.

“We have to be blue collar and that means being physical,” Aus said. “The first period, we were in awe of them for some reason. Then we got the goal and we started to play like we believed we could win.”

Four minutes into the second period, James Hughes flipped a sharp-angle shot on Jaguars’ goalie Justin Woodley, who momentarily lost the puck in his skates. That was enough for Colvard, who swooped in and tapped in the loose puck to tie the game at 1-all.

Jefferson answered quickly, with Nick Nielsen whacking in his own rebound just 1:44 later to regain the lead, 2-1.

The Jaguars took back-to-back penalties midway through the second, giving the Cougars a 5-on-3. Just as the first penalty ended, Stern rifled in a slap shot from the blue line to again create a tie, 2-2.

The game remained tied throughout a very physical third period and overtime, despite several terrific scoring chances from both teams, setting up the shootout.

Centennial's sophomore goaltender didn't find out until the end of the second period of the JV game that he'd be starting the varsity championship game, but he sure came up big on short notice.  Zalezny made 34 saves on 36 shots, including stopping both shootout attempts he faced.

The junior forward ended the game with his shootout goal that he tucked under Jefferson netminder Justin Woodley.  Colvard also netted Centennial's first goal that tied the game at 1-all early in the second period.

Jefferson's stalwart defenseman played what seemed like the entire game, logging huge ice time over the full 59 minutes.  He ended with one assist, but was a key factor both offensively and defensively for the Jaguars.

By the time Centennial hosts Osseo on Jan. 21, the Cougars may feel a bit unfamiliar with their home ice. The Cougars will have played just two of their first 15 games at home and none since hosting North Metro on Dec. 19. But beginning with that Northwest Suburban game against the Orioles, eight of the final 10 games are at the Centennial Sports Arena – the perfect recipe for building momentum entering the section playoffs.