No skate? No problem for Northfield freshman

Despite forgetting crucial piece of equipment, Raiders' Scofield gets hat trick in win over Minnehaha Academy 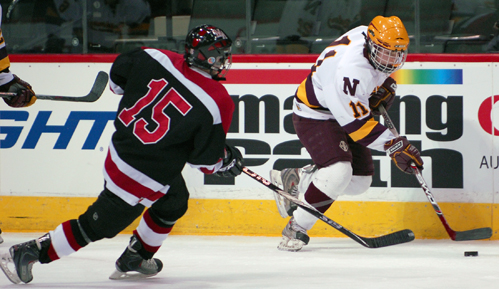 No skate? No problem for Northfield freshman

Despite forgetting crucial piece of equipment, Raiders' Scofield gets hat trick in win over Minnehaha Academy.

After spending several minutes digging through his hockey bag in an Xcel Energy Center locker room on Friday, Jan. 1, the realization settled in that he had only brought one skate to the biggest game of his life.

“We’re getting dressed, and he’s got one skate on and he’s on the phone calling his dad to get another skate here,” Northfield coach Bryce Barry said. “How do you forget your skate when you are going to the X?”

Scofield’s father hustled home and eventually brought that second skate, but it didn’t arrive until after the first period. No worries. Andrew Scofield, a freshman, was already two-thirds of his way to hat track in the Raiders’ 6-2 win over Minnehaha Academy in the Schwan Cup Open Division championship.

The way Scofield tells it, he was at home checking his skate to see if it had lost an edge. After that, things get a little fuzzy.

Scofield, a Bantam-age player who started the season playing at that level before trying out for the Raiders’ varsity team, suddenly began his unlikely run of good luck when he learned teammate Kody Beckers happened to have brought a extra pair of skates.

Scofield scored the only two goals of the first period, then scored again in the third. He also has an assist, as he and linemates Alex Pumper (two goals, two assists) and Jordin Crawford (four assists) proved too much for the Redhawks to handle.

“We knew their first line was going to be the one we had to shut down” Minnehaha Academy coach Darin Thompson said. “We weren’t successful at that today.”

As for Scofield, a day that started with a panic attack ended with him being interviewed by reporters and, at the same time, harassed by his teammates.

“Yeah, when I realized I had only one skate I started panicking,” he said, tugging on the neck of his jersey for emphasis. “It was bad.”

The ending, a hat trick for Scofield and third straight impressive win for a program that hasn’t traditionally been a boys hockey powerhouse, couldn’t have been scripted much better. 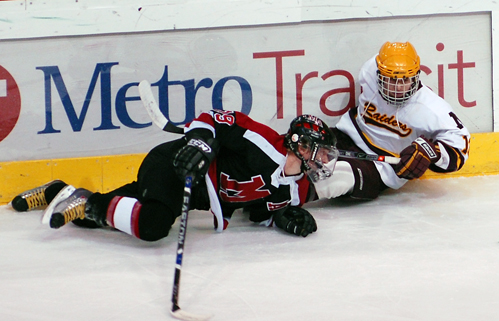 1. Andrew Scofield, Northfield
Freshman has a nose for loose pucks around the net, and he knows what to do when he gets a scoring chance. He scored three goals, including two in the first period when the Raiders surged to a 2-0 lead.

2. Jared Docken, Northfield
Smooth-skating junior defenseman played solidly in his own end, helped set up two goals and scored one in the final minute on a nice shot from the top of the left circle. He also had a third-period solo rush that didn't result in a goal but did include a series of nifty moves that left several Minnehaha Academy players in his wake.

3. Matt Wolpert, Minnehaha Academy
Senior forward never stopped grinding and scored a power-play goal in the third period, banging in his own rebound. The goal was his team-leading sixth of the season.

Freshman sniper
Scofield, a freshman centering Northfield's top line, not only ranks among the Raiders' top scorers but also among the top freshmen in the state in scoring. His two first-period goals (the only scoring in the first) gives him four this season to go with four assists in six-plus games. Scofield added a third-period goal to bump his season totals to five goals and nine points.

How they got here
To reach the finals of the Schwan Cup Open Division, Northfield beat Winona 4-2 and Providence Academy 3-2. Minnehaha Academy beat Irondale 5-1 and North Metro 5-4. Although Northfield had the closer quarterfinal and semifinal games, the quality of its wins rated higher than the Redhawks' victories. Winona is 8-2-0 and off to one of its best starts in program history while Providence Academy also is off to hot start at 7-2-1.