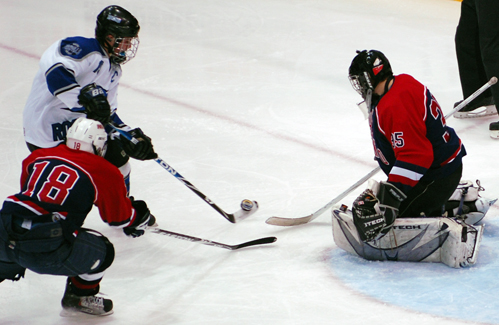 Understandably awestruck by playing in the state’s greatest hockey palace, it took Orono some time to get rolling.

“I think it’s tough when you play in such a big building when it’s a little quiet, a little empty,” Spartans coach Aaron Rogers said about the matchup against Rogers as the Xcel Energy Center. “You have to kind of find your own energy.”

Smith scored twice in the third period, once on a shorthanded breakaway and once from the side of the net on a power play, to lead the Royals past the Spartans 5-3 in the championship game of the Schwan Cup Bronze Division at the Xcel Energy Center in St. Paul on Friday, Jan. 1.

“It was a little nerve wracking, being in a huge, humongous rink,” Smith said. “There were a lot of distractions.”

Orono took a 1-0 lead just 1:59 into the opening period, but Rogers’ Nick Polsfuss tied the score just 41 seconds later. The score was tied twice more, at 2-2 and 3-3 before Rogers pulled away in the third thanks to the work of the speedy Smith.

One of seven sophomores in the Royals’ lineup, Smith scored his shorthanded goal just 14 seconds after Orono’s Ted Ylitalo had tied it at 3 with 8:06 left in the third.

“They coughed up the puck,” said Smith, who was scoreless in six games before the tournament and now has three goals this season. “Then I got by their defense and made a good move on the goalie.”

Scoring, Smith admitted, is not his first thought when he’s killing a penalty.

“But if I get a chance for offense, yeah, I’ll definitely take it,” he said.

Rogers, which already had a surprising victory over St. Cloud Cathedral on its resume heading into the tournament, had the advantage in territorial play, quality scoring chances and shots on goal (37-23) over Orono. But Spartans’ goaltender David Crotteau was sharp, and his teammates were feisty and full of fight up until Miller’s deflating shorthanded goal.

“That’s one of the things that I push on our team, is that we outwork our opponent,” Rogers coach Tim Marchand said. “And I think we did today. We missed on a lot of scoring chances, but that’s alright.”

“They worked hard, that’s for sure,” Johnson said. “There wasn’t a shift where they weren’t all over us.”

It worked out alright for Rogers because when the Royals needed a goal, and another, Miller didn’t miss.

1. Neal Smith, Rogers
Speedy sophomore forward scored the game-winner in dramatic fashion, using his speed to break in alone on Orono goaltender David Crotteau just 14 seconds after the Spartans had scored on a third-period power play to tie the score at 3. Smith added an insurance goal for the Royals later in the third period.

2. Matt Limoseth, Rogers
Senior top-line forward scored a power-play goal with just 26 seconds left in the second period that put the Royals ahead 3-2.

3. Sam Persian, Orono
Junior forward had a goal and an assist and was a force offensively for the Spartans, who generally struggled to consistently create scoring chances and finished with just 23 shots.

How they got here
Orono reached the Schwan Cup Bronze Division championship at the Xcel Energy Center in St. Paul by beating Sartell-St. Stephen 3-2 and Owatonna 5-2. Rogers beat St. Paul Academy 7-2 in the quarterfinals and slipped past Hudson, Wis, 2-1 in the semifinals.