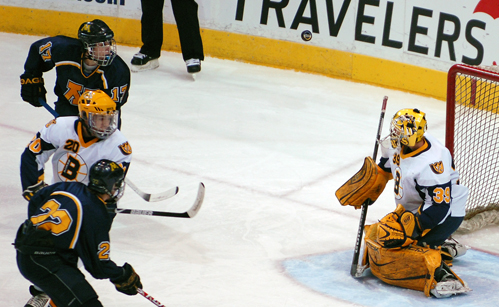 Goal scorers get edgy when they don’t score.

“There wasn’t a lot of talking on the bus on the way home, even though we won,” Breck’s Michael Morin said about the aftermath of the Mustangs’ Dec. 28 victory over Stillwater.

That win, in the quarterfinals of the Schwan Cup Silver Division tournament, marked the first time Breck’s top line of Michael Morin, Tyson Fulton and Riley Borer had been shut out this season.

The other thing about goal scorers, the good ones, is they don’t stay silent for long. On Friday, Jan. 1, in the Silver Division Championship at the Xcel Energy Center in St. Paul, Morin and linemate Tyson Fulton each scored twice in the No. 2 Mustangs’ 4-2 win over No. 5 Mahtomedi in a matchup of two of the state’s top ranked Class A teams.

Fulton’s speed, Borer’s heavy shot and Morin’s playmaking skills – among the linemates’ many other attributes – make the trio one of the state’s most fearsome units.

“We just kind of all work together,” said Morin, who like Fulton is being recruited by WCHA teams. “We have great, great chemistry I think.”

The play started with Fulton feeding Morin the puck as the two crossed the blue line. Morin quickly returned the pass to Fulton, threading it past a Mahtomedi defenseman. Fulton, still skating at top speed, made a nice move on Zephyrs goaltender Brad Wohlers and deposited the puck in the net.

“Their other lines are good, but definitely tonight (Morin, Fulton and Borer) were the ones creating the opportunities and, obviously, putting the puck in the net,” Mahtomedi coach Jeff Poeschel said after his team dropped to 6-3-0, with two of the losses coming against Breck.

Fulton, who also scored on an end-to-end solo rush, leads the Mustangs with 13 assists and 20 points. Borer has 15 points and Morin, who banged home two rebounds for goals, has 13 points.

“They weren’t real happy (about the Stillwater game),” Breck coach Les Larson said. “But they played real well (in a 6-0 tournament semifinal win) against Lakeville South, and they carried us tonight.”

1. Michael Morin, Breck
Senior forward scored two goals but his third-period pass setting up linemate Tyson Fulton's second goal was the prettiest play of the night. Morin's return pass showed both unselfishness and the chemistry he has with Fulton.

2. Tyson Fulton, Breck
Senior forward didn't have to do much on his third-period goal after Morin's pretty pass, but Fulton did score on a beautiful rush spanning all three zones in the first period, showcasing both his speed and skills around the net.

No pushover
Of Breck's six victories heading into Friday's game against Mahtomedi, only one of them had been decided by fewer than five goals. Included in that string of blowout wins was a 7-1 triumph over Mahtomedi on Dec. 1. The rematch with the Zephyrs was nothing like the first meeting, however, as Breck was clinging to a 3-2 lead late in the third period before Tyson Fulton scored his second goal of the game.

How they got here
Breck reached the Schwan Cup Silver Division championship by beating Stillwater 4-2 and Lakeville South 6-0. Mahtomedi beat Burnsville 5-4 in the quarterfinals and Blake 3-2 in the semifinals. Close games are becoming the norm for the Zephyrs, who before playing Breck had been involved in five straight games decided by two goals or less.