In defense of a title: Eagles visit Skippers

A big statement game kicks off the week ahead, when the defending state Class AA champions (Eden Prairie) visit the team everyone expects to knock them off this winter (Minnetonka).

True hockey fans have no excuse not to catch this game, as even if they aren’t able to get down to Minnetonka, Pete Waggoner and the MyFoxHockey crew will be webcasting this one from Pagel Activity Center beginning at 7 pm (click here for the Wagontrain’s preview of this game).

Eden Prairie comes into the tilt with a 6-1-0 record and is ranked No. 5 in the state. But the Eagles are a bit overlooked right now, not the least bit because they haven’t played since a Dec. 22nd victory over Burnsville.

Coach Lee Smith’s club took the holidays to fine tune their game in practices and scrimmages rather than play in a high-profile holiday tournament. Despite their gaudy record, there have been some struggles at times for the Eagles as they look to repeat.

Last year, Eden Prairie rode a very deep and balanced lineup and Mr. Hockey defenseman Nick Leddy to the state title. The Eagles’ sophomore class, which had won a state Bantam title the previous year, was a big contributor to the championship, as well.

Leddy departed for the Gophers (and was drafted by the NHL’s hometown Wild), but with much of the remainder of the team back with experience, Eden Prairie was expected to remain a contender.

Junior defenseman Dan Molenaar has had to step into that leadership role on the blue line and has done well, but surprisingly, the Eagles have had trouble scoring goals. Outside of its top line of junior Kyle Rau (12-7-19) and seniors Mitch Rogge (5-10-15) and Mike Erickson (4-4-8), the rest of the team has just eight goals in seven games.

The Eagles are firing an average of 38.6 shots a game on net, so the threat of offense is there. But until they start denting the twine, Eden Prairie will find itself in close games. Thankfully, they’ve been strong on defense with just 23.0 shots and 1.86 goals per game allowed. Junior Andrew Ford (5-1-0, 1.79, .920) has carried the load between the pipes as he did throughout the playoff run last winter.

Meanwhile, until the past week, everything was looking rosy for Minnetonka. The Skippers have raced out to a perfect 11-0-0 record and are a unanimous No. 1 team after claiming the Schwan Cup Gold division over the holidays. They beat Edina by a goal in the championship, even without senior forward Max Gardiner (11-18-29) who leads the team in scoring.

The Minnesota recruit broke a wrist in the semifinals and will reportedly be out for up to six weeks. His leadership will be missed, as will the rapport he had established with high-scoring freshman Max Coatta (10-8-18) and junior Derek Frawley (6-14-20) on the Skippers’ top line. Minnetonka’s other forwards will have to step up in his absence.

And it’s quite likely coach Brian Urick’s crew will rely even more on its formidable defensive unit led by D1 recruits Justin Holl (7-2-9), Troy Hesketh (2-6-8) and Andrew Prochno (5-16-21). All three are headed to WCHA schools (Holl to Minnesota, Hesketh to Wisconsin and Prochno to St. Cloud State) and have different – and complementary – strengths on the ice. Prochno is a free-wheeling offensive defenseman, Hesketh is well-rounded on both ends of the ice, while until this year Holl had proven to have a defense-first mindset. But with seven goals in 11 games, he’s finding his heavy shot from the blue line is tough to stop.

The trio provides plenty of support for senior goaltender Jim Kruger (9-0-0, 1.44, .930), who is in his third year of starting for the Minnetonka varsity. He’s an experienced and talented netminder and a terrific last line of defense.

Not only will tonight’s game be important in the state rankings, it will also be a key battle for the Section 6AA playoff seeding. Both teams (along with Wayzata and Benilde-St. Margaret’s) are part of the toughest section in the state. 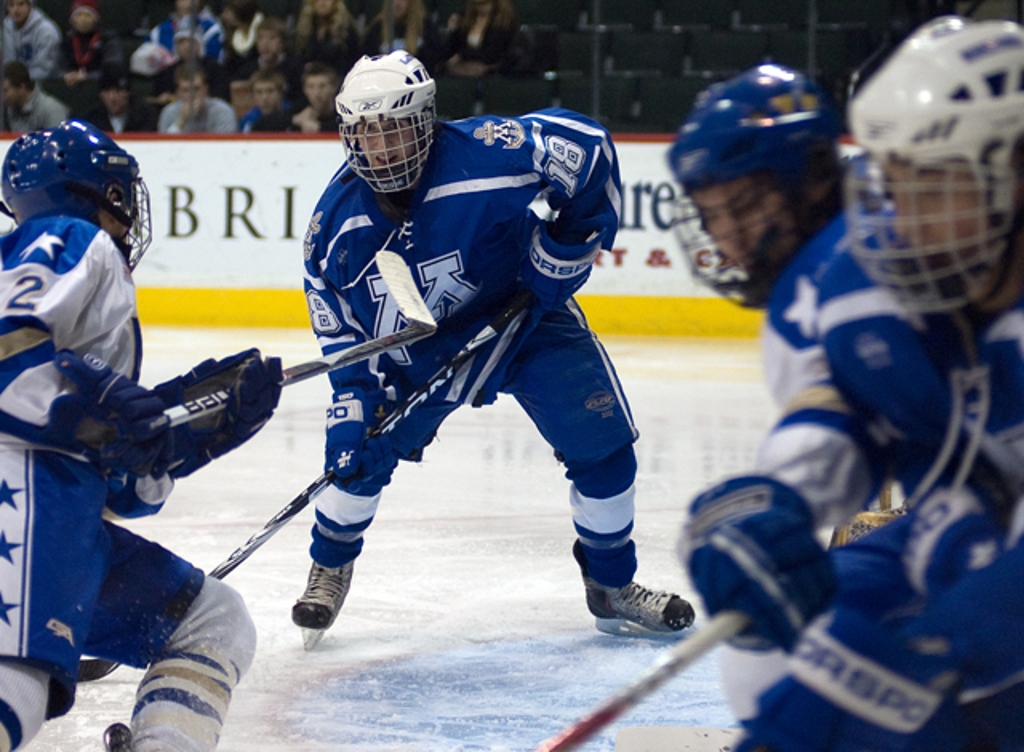