Prowler between the pipes

Q and A with Thief River Falls' Zane Gothberg

To hear his coaches and teammates talk, Thief River Falls senior Zane Gothberg is one of those rare goalies that makes his impact felt all over the ice.

“He’s almost a sixth (skater) at times out there,” Thief River Falls coach Tim Bergland said of his big netminder, adding that he likes to play the puck and move it up ice to start a Prowlers’ rush.

Thief River Falls All-State defenseman Jacob Malwitz countered with a different take. “He’s like a third defenseman out there. You know he’s going to have your back.”

Perhaps it’s not surprising that Gothberg, a 6-foot-2 North Dakota recruit, is widely considered the top goaltender in the state. He recently picked up an A ranking by the NHL Scouting Bureau, the only such grade above a C given out to Minnesota high school netminders.

“You have that confidence game-in and game-out that he’s going to have a big game,” Bergland said. “He’s going to give you chances to win at all times.”

It’s been a whirlwind year for Gothberg, who backstopped the Prowlers to a one-goal loss in the Section 8A finals to Warroad last March, then immediately earned a spot on the USA Select 18 team that traveled to the Ivan Hlinka Tournament in Slovakia, then returned to Minnesota for the Upper Midwest High School Elite League in the fall.

Without so much as a break to catch his breath, Gothberg has played nearly every minute for the Prowlers this winter. Heading into the Thursday night, Jan. 7 showdown at Moorhead, Gothberg had compiled a 9-3-0 record with a 2.03 goals against and .891 save percentage.

Coming off a tough 4-2 loss to the Spuds, The Breakdown conducted an interview with Gothberg about his season and Thief River Falls' playoff history with Warroad.

Breakdown: What is the rivalry with Warroad like over these past few seasons (The Warriors have knocked the Prowlers out of the playoffs in each of the past two seasons in one-goal games)?

Gothberg: You have to love playing in those big games. There are definitely a lot of people who come out and watch those games. (Warroad senior) Brock Nelson, I played with him in the Elite League and we kind of grew up playing against each other. It’ll be a fun one.

Breakdown: Do those guys rub in the fact that they’ve had the upper hand the past few years? What do you do to get over the hump?

Gothberg: Yeah, we want to turn the wave a little bit. Hopefully we’ll catch them at a good time. You make your breaks and make your chances. Hopefully we’ll bear down and get a better grip on the stick and get in the corners – be feisty.

Breakdown: Give me a scouting report on yourself. What makes you such a good goaltender?

Gothberg: It differs from in-season to off-season. Off-season you go a lot harder on muscle building – a lot of power lifting and stuff. In-season, it’s mostly endurance work, riding on the bike and just making sure conditioning is better.

Breakdown: It’s been kind of a whirlwind year for you with all the recruiting and USA Hockey you’ve done. What has that been like?

Gothberg: It’s been great, but it’s been tough on the family. I came home after Slovakia and the house was a wreck because we’d been going non-stop for four months. It was good, though. You have to love playing hockey.

Breakdown: Tell me about Jacob Malwitz, your All-State defenseman. Not many people get to see him outside of the Northwest corner of the state. How much does he help you out?

Gothberg: It’s a shame because he has skills. Not playing in the Elite League, there were some question marks (about him), but he moves the puck well and has good speed. He can play the body sometimes, but is mostly a stay-at-home defenseman. He’s a big part of the team.

Gothberg: The locker room stuff, mostly. Just hanging out with the boys. Right after school we whip over to the rink and lift weights and just hang out. We have a big plasma (TV) in our locker room, so we hang out and watch the games a little bit. We (also) like to play video games online with the boys and have a good hockey tournament on NHL 2010. 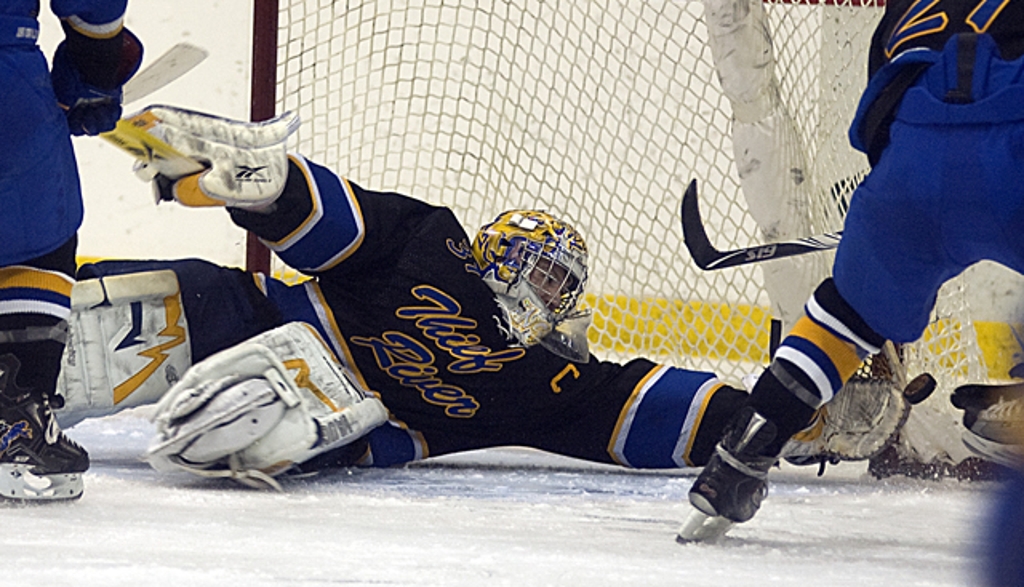